AT a time when there’s so little to laugh at in this crazy, COVID-19 afflicted, Trumpite world of ours, über-conservative Catholic actor and director Mel Gibson, above, has sent a tsunami of mirth through social media by announcing that he’s planning to release a sequel to The Passion of the Christ.

The news immediately set Twitter users on a quest to find the best title for Gibson’s comeback kid. Among the popular recommendations, according to this report, are:

• The Passion of the Christ 2: Dead and Loving it.

• The Passion of the Christ 2: I Still Know What You Did Last Easter.

• The Passion of the Christ 2: Jesus, another one?!

• The Passion of the Christ 2: I can’t believe it’s not Buddha.

• The Passion of the Christ 2: Beyond Martyrdome.

• The Passion of the Christ 2: Dude, where’s my crucifix?

• The Passion of the Christ 2: Three Days Later.

But according to Twitter trends, there is one clear front-runner, which multiple people are rooting for – The Passion of the Christ 2: Electric Boogaloo.

Ryan Britt, writing for Inverse two years ago, pointed out that that in 2004 comedian Sacha Baron Cohen predicted that there would be a sequel to Gibson’s original.

In an episode of Da Ali G Show, interviewed conservative US politician and commentator Pat Buchanan. During the conversation, Buchanan praised The Passion of the Christ, to which Ali G responded:

Aren’t you worried that because it made so much cash, they’ll just make a sequel that won’t be as good, where like he comes back to life or whatever?

The joke went over Buchanan’s head, but it mocked the fact that in the Bible, Jesus Christ does, in fact, come back to life (spoiler alert), mirroring the trope of movie sequels that have resurrected their deceased main characters. But now, we live in a future in which this sequel is indeed going to happen.

Yesterday (Tuesday) Christian Post announced that the sequel will be yuuuuge, quoting “Jesus” aka actor Jim Caviezel, above, as saying:

It’s called ‘The Passion of the Christ: Resurrection.’ It’s going to be the biggest film in world history.

Gibson revealed the subject of the sequel in 2016, telling Stephen Colbert of  The Late Show that the film might feature characters visiting other realms.

It’s not just some chronological telling of just that event. That could be boring, and you think, ‘Oh, we read that.’ But what are the other things around it that happened?

Different from Passion, which features a grisly depiction of the crucifixion of Jesus Christ, Resurrection is expected to explore the three days between His death and resurrection. 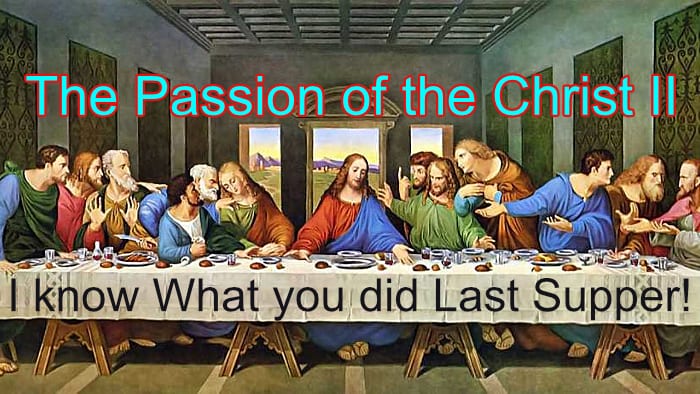 It’s more than a single event, it’s an amazing event. And to underpin that with the things around it is really the story, to enlighten what that means.

Mel Gibson’s torture-porn epic is one of the things that drove me out of the church.

James was interviewing Hollywood star Brad Pitt, who mentioned a film he’d like to make about Pontius Pilate. Said Pitt:

It certainly won’t be for the ‘Passion’ crowd.

Pitt said that when he saw The Passion:

I felt like I was just watching an L. Ron Hubbard propaganda film.

My suggestion for a title? The Passion of The Christ 2: Hey pal, here’s a hammer and some nails. Now fix those rickety stairs!

September 23, 2020 Sex-ed: Stupidity trumps common sense in Texas
Recent Comments
0 | Leave a Comment
"Costelloe claims that the 'church can and must also take whatever steps are necessary to ..."
David Cromie ‘Church has changed’ says archbishop after ..."
"I expect the 'holy father' had in mind members of the Roman church, such as ..."
David Cromie Pope Francis: Better to live as ..."
"It hardly matters how you slice and dice it, the fact remains that the man-god ..."
David Cromie Superhero Jesus comic branded ‘blasphemous’ by ..."
"???"
David Cromie Superhero Jesus comic branded ‘blasphemous’ by ..."
Browse Our Archives
Related posts from The Freethinker