SHORTLY after wealthy Texas prosperity preacher Marcus Lamb, above, founder and President of the Daystar Television Network, received almost $4-million from the US government’s  COVID-19 Paycheck Protection Program (PPP), he and his family began jetting around the country in a newly-acquired, multimillion-dollar 1997 Gulfstream V, enjoying holidays in Florida and California.

When the press got wind of Lamb’s new acquisition and starting digging into his lavish lifestyle, he insisted the new jet was a replacement for an old one, and that it was being used for “ministry purposes.”

Daystar, based in Texas, is one of the the world’s largest Christian-based TV networks that features popular preachers and hosts Marcus and Joni Lamb. It is classified as a tax-exempt church and thus is not required to disclose its finances.

Lamb, who admitted to cheating on his wife in 2010, replied:

No we did not; used our own money.

He lied that the jet was “absolutely” used for church business only and that the Florida and California trips were “working vacations.”

To prove just how easy it was for faith-based organisations to screw money out of taxpayers, The Christian Post reported yesterday that a “fake church” – is there any other kind? –  received PPP payments totaling $8.4 million, claiming that it was a family-run ministry in Florida with 486 employees.

But ASLAN International Ministry was not involved in any religious work and the only people found to be associated with the project were four members of the same family, according to a civil forfeiture complaint filed in  the US District Court in Orlando.

Court records show that the family tried to spend some of the funds on a $3.71 million house in Disney World’s Golden Oak neighborhood before being nabbed by the authorities.

ASLAN’s Vice President, Joshua Edwards, pictured above with his family, submitted documents for the loan programme and painted it as a successful operation with a monthly payroll of $2.76 million and revenue of more than $51 million in 2019.

He also presented IRS forms and a cover letter from an accountant that showed summaries of ASLAN’s bank accounts. The accounting firm had the same address as ASLAN and banks listed on the letter later told federal authorities the ministry didn’t hold the accounts with them.

The US Secret Service later seized more than $7.5 million from accounts at Bank of America and another $868,000 from First American Trust from ASLAN International Ministry.

The perpetrators of the fraud attempted to conceal the source, nature and location of the bank fraud proceeds by moving the proceeds through numerous bank accounts, held in different names.

Home Bank reportedly approved and closed on ASLAN’s PPP loan in May and wired the funds into an account that previously held a balance of only $25, court documents note. The funds were later wired into several bank accounts held under the names of Joshua, Evan, Joy and Mary Jane Edwards, Evan’s wife.

Federal agents discovered that ASLAN wasn’t a “real” religious outfit after discovering empty office space on North Orange Blossom Trail where the ministry claimed to have its headquarters.

ASLAN’s website also only had “generic religious information” which was plagiarised from other websites. As authorities continued their investigation, the entire website was deactivated.

Federal authorities also found that the man who signed off on ASLAN’s IRS forms hadn’t done accounting for ASLAN since 2017, can’t speak and has dementia.

They eventually went to Joshua Edwards’ home in New Smyrna Beach on Septdember 16 and discovered it was cleared out.

The family of four was nabbed doing a runner in September after Florida Highway Patrol stopped a vehicle for speeding along I-75.

In the car, authorities found external hard drives, a document shredder, multiple credit and gift cards, laptops as well as a handwritten note that the Department of Homeland Security had frozen their bank account, the report said. Electronic items seized during the arrest include a government research manual called “Tracing Money Flows Through Financial Institutions” and news articles about SBA loan fraud investigations.

Under the PPP, which closed on August 8, as long as a church employed 500 people or fewer, it could request a federal loan for an amount 2.5 times its average monthly payroll. The loans, along with a 1 percent interest, would be forgiven by the government as long as 75 percent of the funds are used to cover payroll expenses in the eight weeks after the house of worship receives the funds. The remaining 25 percent can be spent on rent, utilities, insurance and other operating costs.

Some 75 percent of Christian churches and organisations that applied for and received forgivable loans under PPP for small businesses, said the loans helped keep their operations fully staffed and many of them have already been forgiven.

One thing revealed by this story is the glaring hypocrisy of America’s evangelicals when it comes to receiving government funds. Social Welfare, food stamps, Obamacare, any form of state funded healthcare, government assistance programs, etc, for the ordinary man are evil, because they are a form of socialism, which will destroy America, so they say.

And yet when it comes to receiving PPP Loans from the same government, no such objections are raised, and evangelicals gleefully accept the funds with no question and no hint of shame. If they really trusted God, they would not accept these funds. 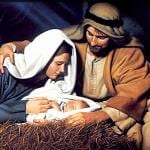 December 18, 2020
Born around this date (according to Christian mythology): Jesus
Next Post

December 20, 2020 Ex-jailbird praises 'barbarian' Trump as a 'champion' of Christianity
Recent Comments
0 | Leave a Comment
"Waning, not gone."
Kevin R. Cross In a blow to Catholic influence ..."
"Wouldn't it save a lot of political and religious posturing if fundamentalist ‮malsI‬ merely embraced ..."
Thanks4AllTheFish Mohammed cartoons frenzy in Pakistan: Islamist ..."
"in our western pot ..religion is waning .."
Joe Biggs In a blow to Catholic influence ..."
"Barry, there's a difference between "vulgar" and "vernacular"."
Ann Kah Leading theologian’s son uses social media ..."
Browse Our Archives
get the latest from
The Freethinker
Sign up for our newsletter
POPULAR AT PATHEOS Nonreligious
1