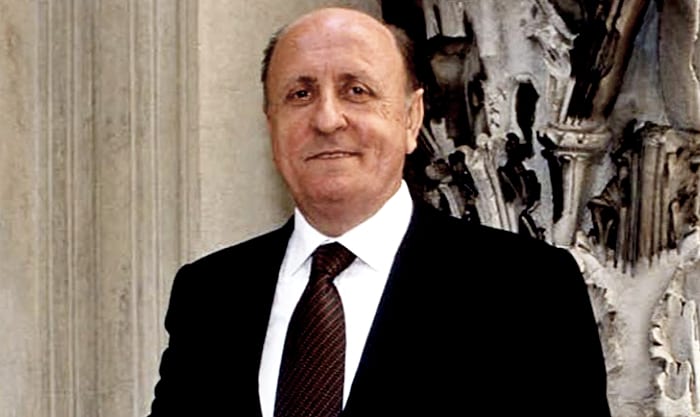 FURTHER proof that Catholicism and crime go together like Bonnie and Clyde emerged this week when Angelo Caloia, above – former head of the Vatican Bank – was sentenced to almost nine years in prison.

The 81-year-old ex-President the Works of Religion (IOR) was convicted by a Vatican court of money laundering and aggravated embezzlement related to the sale of real estate owned by the bank.

His 97-year-old lawyer Gabriele Liuzzo and a third defendant were also found guilty and sentenced to jail terms.

But Religion News reports that Caloia’s lawyers “lamented” in a statement that the trial took place:

In a climate that was on the whole unfavourable to the defence.

It was a reference to complaints by defence lawyers that the Vatican’s “outdated legal system” didn’t afford the defendants the same rights and protections that modern legal systems do.

Before the verdict, Caloia had proclaimed himself innocent, and “a victim” of “operations orchestrated by other people.”

Caloia, who served as President from 1999 to 2009, and lawyer Gabriele Liuzzo were sentenced to eight years and 11 months in jail, according to a statement from the Vatican on Thursday.

The judge also ordered Caloia and Liuzzo to pay a fine of €12,500 each.

They stood accused of having sold 29 properties – 70 percent of the IOR’s real-estate assets  – to themselves on the cheap through offshore companies.

The trial also involved Gabriele Liuzzo’ son, Lamberto Liuzzo, who was also found guilty for his part in the crime and sentenced to five years and two months in prison, and was fined €8,000.

All three denied the allegations and intend to appeal.

Investigations into the crimes began in 2014 and focused on operations carried out between 2001 and 2008, which caused estimated financial damage of €57 million.

Following the investigations, Caiola resigned from all his posts, including the presidency of the Veneranda Fabbrica del Duomo di Milano, which oversees the maintenance and preservation of Milan’s famous Cathedral.

The three defendants all received lifetime bans from serving in public office.

None of them attended the sentencing and the Vatican did give details on how they would be taken into custody.

The trial was significant given that it showed a willingness by the Vatican to prosecute its own for shady business deals that have long characterized the Holy See’s murky finances.

More such cases are in the pipeline, including one involving the Vatican secretariat of state’s 350 million-euro investment in a London real estate venture and the same office’s payments to a self-styled intelligence analyst who was purportedly working to free Catholic hostages in Africa.

Court-appointed experts estimated the bank lost some €34-million in potential revenue due to the under-valuing of the sales, and determined the suspects siphoned off €19-million for themselves, the Vatican press office said.

The bank’s former manager, Lelio Scaletti, had been implicated in the scam but died during the investigation.

January 22, 2021
Head of a quack medical group arrested over Capitol breach
Next Post