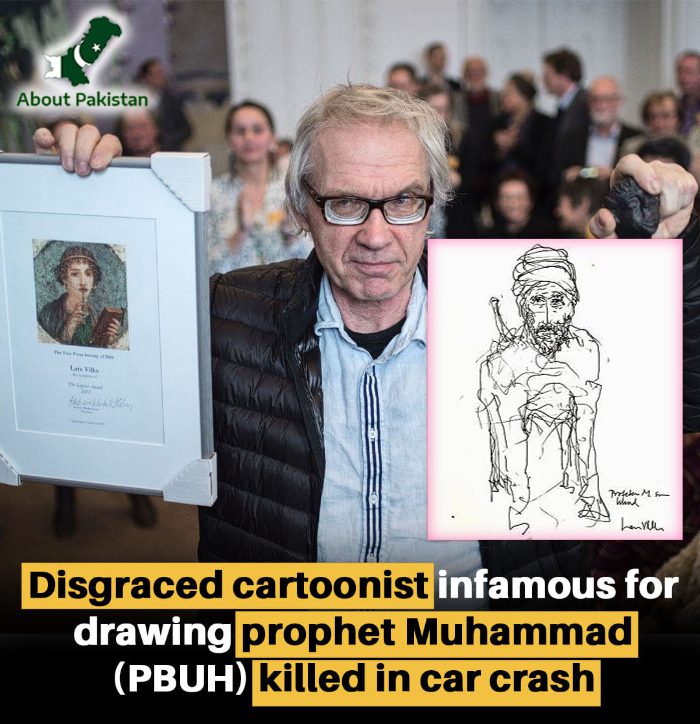 ABOVE is first image I saw when I learned today that Vilks, 75, living under police protection for depicting the “prophet” Muhammad as a dog (inset by me), had died. It was posted on on the Facebook page of “About Pakistan”. There was just one comment: “He finally met the truth.”

Vilks, according to Insider, was put under police protection in 2007 after he received death threats for publishing the drawing. At the time, Al Qaeda put a $100,000 bounty on his head and his house was fire-bombed.

Vilks, 75, was killed yesterday (Sunday) alongside two police chaperones when a truck smashed into a police car carrying him in the town of Markaryd, where he lived.

This is a very tragic incident. It is now important to all of us that we do everything we can to investigate what happened and what caused the collision. Initially, there is nothing that points to anyone else being involved.

At the time of the drawing’s publication, Vilks said he didn’t intend to offend Muslims, but that he wanted to make a statement about political correctness.

That’s a way of expressing things. If you don’t like it, don’t look at it. And if you look at it, don’t take it too seriously. No harm done, really.

Defending himself further, Vilks noted that he had also depicted Jesus as a paedophile.

His death prompted a Facebook post by Fariborz Pooya, above, who pointed out that ex-Muslims had gathered in Stockholm in June 2010 to condemn the threats issued against Vilks by Islamic zealots.

On Monday 7 June 2010 the Council of Ex-Muslims of Britain, Germany and Scandinavia joined Lars Vilks in a press conference in Stockholm to condemn the threats and violent attacks against the Swedish artist who drew a caricature of the Prophet Muhammad. In May, Islamist thugs tried to burn down his home after he showed a film about Islam and Homosexuality during a lecture at Uppsala University.

Fariborz Pooya said Vilks was not alone in his fight against political Islam and called for “unconditional freedom of expression.” He stressed the importance of distinguishing between Islamic states in their attempt to undermine freedom of expression and limit citizen’s right to free expression and the majority of people who are labeled as Muslims in European countries who are the first victims of this movement.

The press conference was widely covered in the national media in Sweden.

Wikiwand provides an in-depth account of how Vilks became one of the Islamic world’s most hated figures.

On June 11 2007, Vilks was invited to participate in an art exhibition on the theme “The Dog in Art” that was to be held in the small town of Tällerud in Värmland. Vilks submitted three pen and ink drawings depicting Muhammad as a dog. At this time, Vilks was already participating with drawings of Muhammad in another exhibition in Vestfossen, Norway, on the theme “Oh, My God”.

Vilks stated that his original intention with the drawings was to:

Examine the political correctness within the boundaries of the art community.

According to Vilks, the art and culture communities in Sweden repeatedly criticize the United States and Israel, whereas “Muslim values” are rarely even questioned.

On July 20, the day before the opening of the exhibition in Tällerud, the organisers decided to withdraw Vilks’s drawings from the exhibition due to security concerns and fear of violence from Islamic extremists.

Following the first refusal to publish the drawings, Vilks submitted his drawings to the Gerlesborg School of Fine Art in Bohuslän (where he is a frequent lecturer) for a special teachers’ exhibition that was going to be opened on August 18. On August 13, however, the school announced that they also had decided to reject the drawings due to security concerns.This second rejection started an intense debate in the Swedish media about self-censorship and freedom of expression.

On August, the Örebro-based regional newspaper Nerikes Allehanda published one of Vilks’s drawings in an editorial on freedom of expression. The editorial defended “Muslims’ right to freedom of religion” but also said it must be permitted to “ridicule Islam’s most foremost symbols – just like all other religions’ symbols.” On the same day, the drawings were also published in several other Swedish newspapers including Aftonbladet, Dagens Nyheter, Expressen and Upsala Nya Tidning.

This sparked protests against Sweden from Iran, Pakistan, Afghanistan, Egypt, and the Organisation of the Islamic Conference (OIC) which represents 57 Muslim countries. The IOC issued a statement where it strongly condemned the publishing of “blasphemous caricatures” of Muhammad. The Secretary-General of OIC, Ekmeleddin İhsanoğlu, further called on the Swedish government to take:

Immediate punitive actions against the artist and the publishers of the cartoon and asked for their unqualified apology.

I think it’s important to say two things. First, we are eager to ensure that Sweden remains a country in which Muslims and Christians, people who believe in God and people who don’t believe in God, can live side by side in a spirit of mutual respect …

We are also eager to stand up for freedom of expression, which is enshrined in the constitution and comes naturally to us, and which ensures that we do not make political decisions about what gets published in the newspapers. I want to make sure we keep things that way.

On September, Reinfeldt met with ambassadors from 22 Muslim countries to discuss the issue. Reinfeldt said that he had:

Explained how Swedish society works and that we don’t have elected representatives making editorial decisions … this is an open country, a tolerant country.

On September 15, it was reported that the group Islamic State of Iraq had placed a bounty of at least $100,000 on the head of Lars Vilks and $50,000 on Ulf Johansson, editor-in-chief of Nerikes Allehanda.

On March 9, 2010, seven people were arrested in Ireland over an alleged plot to assassinate Vilks.

On February 2015, shots were fired at a free speech debate in Denmark attended by Vilks. It left one civilian dead and three policemen wounded. The attacker fled after a brief gunfight with police and was later shot dead the next day after committing another shooting at a Jewish synagogue, killing one person and injuring two policemen. 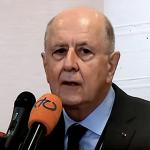 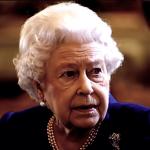 October 4, 2021 If even a fool understands there's no God, why can't the Queen?
Recent Comments
0 | Leave a Comment
Browse Our Archives
get the latest from
Nonreligious
Sign up for our newsletter
POPULAR AT PATHEOS Nonreligious
1