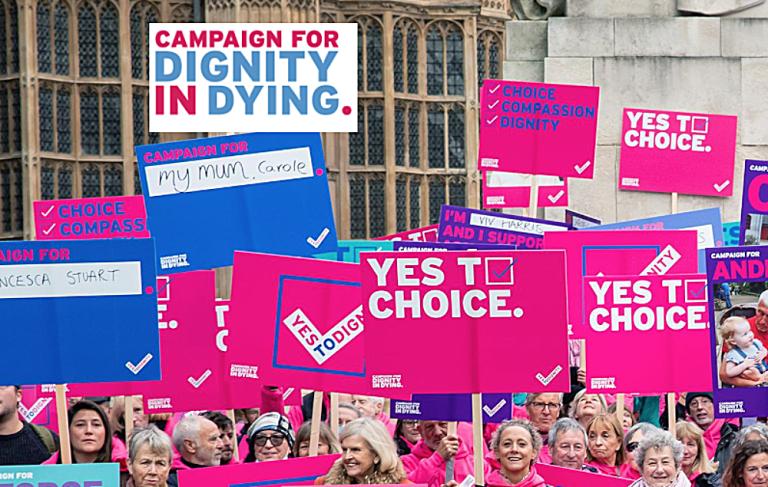 But, according to an email I’ve just received from Sarah Wootton, Chief Executive of Dignity in Dying, the battle is not yet over. The Bill will now go to committee stage where it will be further scrutinised. It is at this stage the supporters of assisted dying  expect crucial votes to take place.

Now is the perfect opportunity to attract the ear of Government. Will you sign this open letter to Boris Johnson today?

Naturally I did, and I hope supporters will do the same, as it may help deliver a knock-out blow to the many religious organisations that oppose a change in the law.

The letter asks the Prime Minister to recognise that assisted dying is a change that is coming and requests that he allocates parliamentary time to allow full and fair debate.

Only then will Parliament be able to fully scrutinise the evidence sufficiently to make a more compassionate law reality.

The last time a Bill was in the House of Lords, we were on track to win but simply ran out of time for the Bill to make it through Parliament. If the Prime Minister made this commitment it would signal a significant shift and recognition by the Government of the importance of assisted dying.

Former MP Lord Field revealed today that he is terminally ill and now supports the legalisation of assisted dying, having previously voted against, in words read out by close friend and proposer of the Bill, Baroness Meacher:

I’ve just spent a period of time in a hospice… if I had been [able to participate in today’s debate] I’d have spoken strongly in favour of the Second Reading. I changed my mind on assisted dying when an MP friend was dying of cancer and wanted to die early before the full horror effects set in, but was denied this opportunity.

Baroness Davidson, former leader of the Scottish Conservatives, used her maiden speech today to support the Bill, after voting against in the Scottish Parliament in 2015.

Ahead of today’s vote,  the Archbishop of Canterbury, the Chief Rabbi and the Cardinal Archbishop of Westminster warned of the risk to vulnerable people should Parliament back a new attempt to change the law on assisted suicide.

In a joint letter to peers, Archbishop Justin Welby, Cardinal Vincent Nichols, who is President of the Catholic Bishops Conference of England and Wales, and The Chief Rabbi, Ephraim Mirvis, spoke of their “profound disquiet” over the Assisted Dying Bill.
The three highlighted “the risks and dangers” entailed in the provisions of the Bill and the “real-life” practical inadequacies of its proposed safeguards.

The common good is not served by policies or actions that would place very many vulnerable people in more vulnerable positions, they warn.

They appealled for people of all faiths and none to join with them through the “common bond of humanity” in caring for the most vulnerable in society.

By the faiths we profess, we hold every human life to be a precious gift of the Creator, to be upheld and protected.  All people of faith, and those of none, can share our concern that the common good is not served by policies or actions that would place very many vulnerable people in more vulnerable positions.

We believe that the aim of a compassionate society should be assisted living rather than an acceptance of assisted suicide.

Latest YouGov research shows that there is overwhelming public support for doctor-assisted suicide for patients suffering from a terminal illness, but that MPs are heavily divided on this issue.

Almost three quarters of Britons (73 percent) think the law should be changed to allow doctors to assist in the suicide of someone suffering from a terminal illness, including 74 percent of Conservative voters and 76 percent of Labour voters. However, just 35 percent of MPs feel the same way, showing, once again, how far out of step politicians are with UK voters.