As some of you are already aware, I loved BRAVE. I thought it was artful, smart, funny, moving, and above all, a wonderful improvement in the representation of female characters in animated films. It was also unabashedly pagan in its imagery and worldview.

But with every Disney movie eventually comes a line of toys, and there’s already been some controversy with the planned release of a Princess Merida doll that is being referred to as a sexed-up version of the tomboyish character. I Googled “disney princess merida brave sexist” and wow, every media rag and their sister is fuming about this. And there does appear to be cause for concern. Compared to the movie’s heroine, the Merida doll has a slimmer waist (and her waist was already pretty slim!), her face apparently has make-up added, and she generally looks more feminine (and by that, I mean bustier) and glamorous in a sparkly blue dress that the original character despised when forced to wear it. 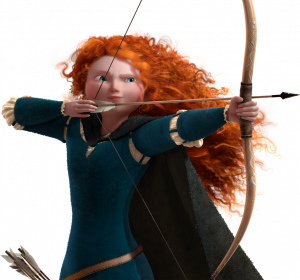 The film’s original co-director and writer who created Merida (Brenda Chapman) said in The Guardian that “by making her skinnier, sexier and more mature in appearance, you are sending a message to girls that the original, realistic, teenage-appearing version of Merida is inferior; that for girls and women to have value – to be recognised as true princesses – they must conform to a narrow definition of beauty.” The article also mentions that an online petition criticizing the doll’s design has already gathered more than 100,000 signatures.

Now, as for me, I’d have been very happy if the girl had not been a “princess” at all and merely a girl…but at least she bent the typical sparkly pink princess mold somewhat. Maybe we have bigger fish to fry than worry whether a doll aimed at little girls is wearing a tad too much eyeliner. But I have to say, this design and marketing of the film’s heroine is a bit disturbing to me; why can’t she be wearing her simple forest green homespun dress and  carrying a bow? Why can’t her love of the outdoors and her natural athletic skill be her main attributes and not, oh, her BOOBS?

But here is the thing: there have already been some Merida dolls on the market. Here’s a selection from one catalog, and they’re all wearing sparkly blue dresses. This one by Mattell has her in purple (and her mother Elinor in apple green). Heck, even the Disney Store sold one before the current kerfuffle: The “Classic Merida Doll” is rather nicely-dressed, too: the dress is blue but not overtly sparkly, and comes with a modest cloak and tasteful accessories, and no extra make-up. And it’s on sale for only $8.00!

If you search for “Merida” on the Disney site you come up with a lot of nifty stuff, including t-shirts, mugs, and plenty of dolls. The Limited Edition Merida doll is very nice: clad in a regal black gown with Celtic knot work jewelry, and full set of bow and arrows. Only $99.50! Maybe sparkly = cheap?

So it seems, with this release of yet another doll design, that the demand for the doll has not abated since the film’s release, but for whatever reason, this new Disney version is, um, sexier. Why? What do you think?

May 15, 2013 Disney bows down to BRAVE fans
Recent Comments
2 Comments | Leave a Comment
Browse Our Archives
get the latest from
Pagan
Sign up for our newsletter
POPULAR AT PATHEOS Pagan
1