The Good News of King Jesus is Better than 4 Laws!: Reflections on The King Jesus Gospel by Scot McKnight

The Good News of King Jesus is Better than 4 Laws!: Reflections on The King Jesus Gospel by Scot McKnight September 20, 2011 Kurt Willems 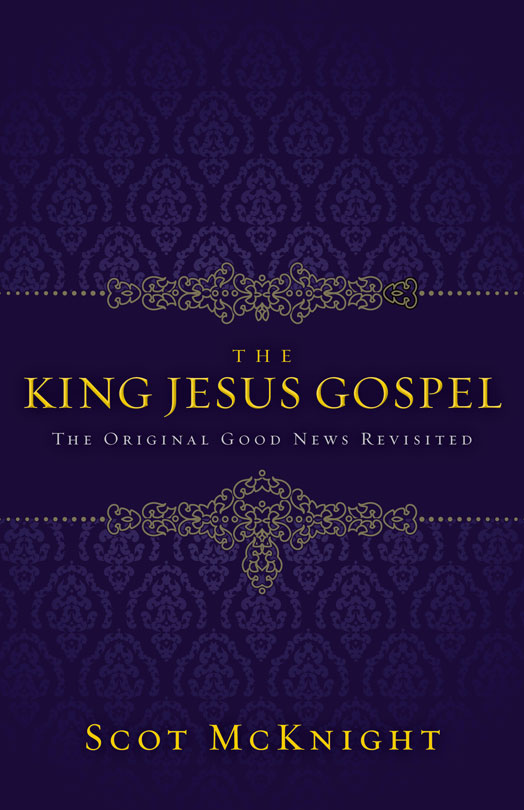 If you grew up in the church, there’s a chance that the Four Spiritual Laws were presented as the Gospel.  When I decided to be baptized at the age of 12, the class for church membership involved using the old yellow tract as the textbook out of which I was affirmed as saved.  There’s nothing wrong with this sort of a Plan of Salvation, but this is not the Gospel.

When I was in college my study requirements included a course on Evangelism.  Our guide: Evangelism Explosion (EE).  By the time I came to this part of my program, I was already reading books by Scot McKnight, N.T. Wright, Brian McLaren, Rob Bell, and others.  So, memorizing the infamous EE outline with the “two diagnostic questions” made me cringe in rebellion.  The questions were – 1) If God were to ask, Why should I let you into my heaven?, how would you respond? 2) If you were to die tonight do you know that you would go to heaven?  Not only does the Bible not ask these sorts of questions, but neither does our post-Christendom culture.  This form of “persuasion” still bothers me to this day.  This is not the Gospel.

Scot McKnight’s The King Jesus Gospel: The Original Good News Revisited, rightly exposes the flaws of equating such “Plans of Salvation” with what the Bible means when it uses the word Gospel.  To make a one-to-one correspondence in this way is reductionistic at best and potentially a distortion of the aim of the biblical narrative.  In order to avoid the mistakes of our Evangelical “salvation culture,” Scot invites readers to imagine what a “Gospel culture” might offer the church.  The Gospel is not “justification by faith” but rather such a reality flows out of the Gospel.

To summarize he says:

The gospel for the apostle Paul is the salvation-unleashing Story of Jesus, Messiah-Lord-Son, that brings to completion the Story of Israel as found in the Scriptures of the Old Testament.  To “gospel” is to declare this story, and it is a story that saves people from their sins…  This story begins at creation and finally only completes itself in the consummation when God is all in all.  This is Paul’s gospel, and while it includes and encompasses the Plan of Salvation… the gospel of Paul cannot be limited to or equated with the Plan of Salvation. (61)

I couldn’t agree with the above narrative covenantal approach more!  Scot nails it here.  But I wondered if he was going to get to the Gospels and Jesus himself. Where is the Gospel of the Kingdom that Jesus preached?  Is Scot going down the path of modern theology, to read Jesus through the grid of Paul rather than Paul through the grid of Jesus? On this, I spoke too soon, because eventually the dots connected beautifully.

I don’t have space to get too deep into this issue, except to say that he goes on to argue that because the completion of the Story of Israel ultimately came in the “four-line gospel” (death, burial, resurrection, appearances [and by extension, the second coming]), the Gospel’s are designed to have these elements as their focal point.  Not to the exclusion of Jesus’ teaching and healing ministry, but to put them in proper narrative focus.  Again, the gospel is the story of Jesus as the completion of the story of Israel.

One thing I know about Scot is that he has an Anabaptist bent.  I was a bit concerned that this wasn’t coming through, because for us Anabaptists, the Sermon on the Mount is central to our Gospel theology.  Although he didn’t deal with it quite as much as I wish he would have, I finally had a moment when everything came into focus.  Scot looks at Matthew 5.17-20 to reflect on the purpose of Jesus’ “moral vision.”  When speaking of the Law and the Prophets (Israel’s Story) Jesus says he didn’t come to “abolish them but to fulfill them.”  “Jesus’ words… show that his behavior and his teaching are understood as the consummation and completion and resolution and telos point of the Old Testament Law and the Prophets!” (106).  In other words, Jesus’ kingdom vision for the new society of the people of God brings the ethics of the Old Testament into their final form, that which will lead into the new creation state of shalom.  This complements the “four-line” tradition that Paul received and handed down.

Finally, if I disagree with Scot at all, it’s probably in regards to the way in which he downplays the significance of the counter-imperial thrust of the Gospel announcement.  To his credit he in no way ignores that if “Jesus is Lord” then Caesar isn’t.  He just isn’t sure that it’s intentionally subversive.  I’m with Wright on this one and think the subversion of an oppressive Empire is a central theme of what the Apostles understood as Gospel.  This one nuance wasn’t enough to keep N.T. Wright from writing the forward and it’s certainly not enough to keep me from commending this book to you!  I think you will find that it brings great clarity on this important issue of Gospel and invites us to dream about what it would look like to create a culture of Gospel – the good news that Jesus is the completion to the story of Israel and that he will someday bring a resolution to the cosmic story of history as well.

September 19, 2011
Shane Claiborne on How Bad Theology Kills and a True Hope
Next Post

September 20, 2011 Dallas Willard on Holiness Moving into the Public Realm (Quote to Ponder)
Recent Comments
13 Comments | Leave a Comment
Browse Our Archives
get the latest from
Progressive Christian
Sign up for our newsletter
POPULAR AT PATHEOS Progressive Christian
1