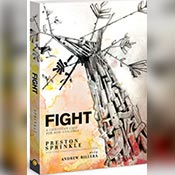 Preston Sprinkle, co-author of Erasing Hell (with Francis Chan), has written a book that ought to be exciting the progressive end of the evangelical world – Fight: A Christian Case for Nonviolence. Many of us, Anabaptist and otherwise, are strongly convinced that nonviolence is central to the gospel of Jesus. For conservative Christians, this is a provocative book that is written by an insider. Preston makes this clear:

“The Christian subculture in which I was raised and still worship is nondenominational conservative Reformed. I’ve been influenced over the years by John Piper, John MacArthur, R.C. Sproul, and many others who swim in that pond. Shockingly, most within this tradition disagree with my position, some with relentless passion. All the more need–again–to open God’s Word to see what He thinks about these issues” (25-26).

Preston, although I’ve never met him in person, seems like an authentically good guy (we’ve interacted via email some). When I saw that he had written a book on a topic that is so close to my heart, I was ecstatic. And let me just come out and say it, I was not disappointed. Neither were the many folks who endorsed the book: Shane Claiborne, Francis Chan, Scot McKnight, Tony Campolo, Michael Gorman, amongst others. I felt as though my journey and Preston’s had many parallels. One of the things that he repeatedly comes back to is that he became a pacifist not by some philosophical/political influence but because of what he actually began to see as clear in the bible. For him (and also for me), this conversation starts with honoring the Scriptures and the God they portray.

One thing I liked about this book is that Preston calls out nationalism as a form of idolatry. He paints a picture of what violence is like in our world and the typical way that Christians respond to issues of war, etc. Preston rightly recognizes the tension that surrounds these issues:

“…what has shocked me—what has led me to write this book—is how outraged Christians get toward those who disagree with them on these issues. If you ever want to stir up your Bible study, ask the other people if it’d be okay to join the military, kill an intruder, or assassinate Hitler if you had the chance. Ask them if they wept or cheered when bin Laden was killed. The questions themselves make people angry” (22).

In my experience, this unfortunate truth makes it very hard to be committed to nonviolence and part of the evangelical community.

As the book moves forward, Preston has to deal with the issue on everyone’s mind when approaching nonviolence: the Hebrew Scriptures. The Old Testament contains some of the most vile depictions of violence. How are we to reconcile the God of the OT with the God of the NT? Well, Preston wisely makes his position clear that God is the same, forever. Both testaments proclaim the same God. Yet, this God operates differently under the realities of the two covenants. Same God, different part of the narrative of Scripture (see 45ff). As he states:

“God met the Israelites where they were and began to take ‘incremental steps’ toward His moral ideal. Nonviolence—it’s not just a New Testament invention. It’s the capstone of the Old” (46).

As the book continues, it’s clear that Preston finds inspiration from various scholars: Copan, Chris Wright, Goldingay, Brueggemann, William Webb, and others. When dealing with the Law of Moses which condones various sorts of violence, Preston states: “What we have in the law of Moses is a moral code that both accommodates to and improves upon the ethical systems of the surrounding nations.” He goes on to explain that God’s revelation is always moving history forward, what William Webb coined a “redemptive movement hermeneutic.” God’s ideal, when dealing with sinful humanity, is always confronted by the real. God’s goal has always been shalom (total harmony in creation – including a nonviolent reality) but to get there in a broken world, God worked/s within a barbarically fallen world. I find this approach to the Old Testament as full of promise. Much more could be said about the approach taken in the book, but there’s an intro. I invite you to dig into those chapters.

Preston’s approach to the New Testament won’t surprise anyone who has wrestled with the issues surrounding nationalism and nonviolence in the New Testament. He walks through the key passages, such as the Sermon on the Mount, and gives an excellent overview of the argument. He even deals with Revelation in what I would consider a responsible way. I’m quite satisfied with his overview of the issues, even dealing with the early church and the “what if” questions. He ultimately concludes that faithfulness to Jesus matters more than our effectiveness. Here’s what he has to say of Jesus:

“In a world swimming in violence, in a land where “messiah” meant militancy, Jesus never acts violently. Whenever violence is addressed, Jesus condemns it. Whenever His followers try to act violently, they are confronted. Whenever Jesus encounters people who deserve a violent punishment, Jesus loves them. And in doing so, He leaves His followers with a nonviolent example to follow. When people around the globe think that American Christians are pro-war, enamored with violence, and fascinated with military might, something is terribly wrong. No one in the first century would have made the same conclusion regarding Jesus and his followers.” (148)

This is a book that should be read by every evangelical small group in America. If the truths contained within its pages were to be absorbed, the face of culture in the USA would be transformed as Christians took their “fight” to their knees instead of with violent words, weapons, and bumper stickers. My prayer is that many who are not convinced that Jesus taught nonviolence, will come to this book with an open mind. God is quite good at changing minds and this book might just be the nudge that some folks need.

This blog review is part of a larger conversation on Patheos at the book club. Check out more here.

August 19, 2013 Biblical Basis for Women's Service in the Church by N.T. Wright
Recent Comments
11 Comments | Leave a Comment
"Message needs to be heard everyday! Going thru some older emails.lol"
Douglas McCall Jesus’ Radical Kingdom Reformation within Judaism ..."
"I am a seminary student and I do not see concrete proof in a Rapture. ..."
Sagacious0ne Why the Rapture isn’t Biblical… And ..."
"Good luck on trying to politely tell those who favor Patriarchy or complementarianism that you ..."
esbee Mutuality in the Church for the ..."
"yup, have you ever heard a Hungarian pronounce Gyorgi? George is WAY easier. I've never ..."
RMS Name Change Myth: Saul Never Became ..."
Browse Our Archives
get the latest from
Progressive Christian
Sign up for our newsletter
POPULAR AT PATHEOS Progressive Christian
1