I am certain that few of you have seldom if ever used an Ezra text as the basis for a sermon on Advent 3. Yet, the Narrative Lectionary offers this text to us. The obvious question is why. Why should I think about a disputed historical text from the Hebrew Bible while the church is hurtling inexorably toward the birth of Jesus? It is always important to remember just what the Narrative Lectionary tries to be, namely a salvation narrative, the story of God’s actions and hopes for the people God has chosen as conveyors and beacons of that story for the world. Ezra’s story is a crucial part of that story, the story that culminates for Christians in the events at Christmas and ultimately Easter.

The actual history that Ezra supposedly represents is in constant scholarly dispute. It is obvious that the books of Ezra and Nehemiah are closely aligned in several ways, but the exact shape of that alignment remains the stuff of PhD dissertations and need not detain us here. (My sincere apologies to those reading this who adore such arguments; I assume your nerdy numbers are quite small, though excessively vigorous!) What is important for us preachers and teachers of this literature is how the tale, the story, plays its role in the ongoing story of God’s ways with Israel and eventually with us.

I would describe the gift of Ezra’s narrative as at least two-fold. First, he was a supremely pious man whose concern for Torah was centered on the fact that it was YHWH’s revelation for the Shalom of Israel. That is, he was convinced that the rebuilding community of Judah was in desperate need of the Torah, the codified law of YHWH, if they were to survive and thrive in a Judah reborn. His primary conviction is that the Jerusalem temple, the house of his God, must be rebuilt and used once again as the primary place of the worship of YHWH (Ezra 1:1-4). And that building must be aided by all true followers of YHWH by their gifts of gold, silver, and other freewill offerings.

Then at Ezra 3:1-4 we find the people starting to reinstitute the sacred burnt offerings to YHWH, as ordained in the Torah, especially the monthly offerings of New Moon, as well as during all the prescribed festivals. This was done even though the foundations of the temple had yet to be laid! The offerings were the prerequisite for the actual building that was made possible by the payment to “masons and carpenters,” along with food and drink supplied to “Sidonians and Tyrians” who were charged to bring the giant cedar trees of Lebanon as the center posts for the new building. And all of this activity was made possible by the generous grant of Cyrus of Persia, he who had freed the Judeans from Babylon, and was therefore named “Messiah” by the prophet Isaiah (Is.45), though he was clearly a pagan, completely unaware of YHWH of Israel. All this is described to us at Ezra 3:1-4.

Then a curious and heart-wrenching scene is given at Ezra 3:10-14. The day that the foundation of the Temple is at last laid, festively-dressed priests sounding trumpets are on hand to lend religious power to the day, while Levites, sons of Asaph, play cymbals, according to the long-standing directions of King David. All of this company sing, praising and giving thanks to YHWH, apparently using the language of Psalm 136: 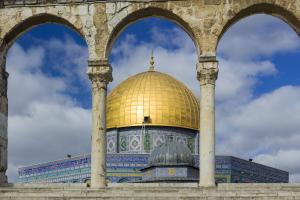 “YHWH is good, because God’s chesed endures forever toward Israel.” However, not all present that day joined those who shouted for joy. Certain older members of the priests and Levites, “those who had seen the first house on its foundations, wept with a loud voice when they saw this house” (Ezra 3:12). This is, of course, primarily historical fiction, since the Temple was destroyed in 587BCE, and the first returnees to Jerusalem could not have arrived much before 539 or more likely some years later. It is possible that a few of the elders, when they were quite young, could have seen the Temple before its destruction, could have lived throughout the Babylonian exile, and then joined the returnees. They would indeed be old persons. But whether or not the scene is historically plausible, its narrative power is obvious. Not all who witness the new Temple are as thrilled with it as everyone present at its rebirth; the memory of the older building is fresh and much lamented by some. The shouts of joy and the loud weeping intermingled on that day; in fact “the people could not distinguish the sound of the joyful shout from the sound of the people’s weeping” (Ezra 3:13). Lamentation should not and cannot be stilled by joyful sounds; the pain of loss remains quite real and must be heard and honored by all who celebrate the new expression of God’s house.

From this first important idea from Ezra’s narrative we may learn that Advent brings with it both joy and lamentation, since the new gift of Jesus to the world does not crowd out completely the struggle and pain of the old world. The services of “Blue Christmas” attempt to make that an important reality in the lives of our churches, a reality that our loud celebrations should not diminish or avoid.

The second offering that the narrative of Ezra brings to us is a far more problematic one. Basing his rulings on the Torah he brings and reads to the Judeans, Ezra forces the people to put away those they have married who are not members of the house of Israel. Ezra finds in the Torah story after story of the dangers of the contamination of foreigners on the Israelites, from Solomon’s myriad foreign wives who led him away from YHWH to Ahab’s disastrous union with the Tyrian Jezebel that stirred Elijah to such prophetic fury to the continual fear that Israel will be led astray by consorting with those of different religious persuasions throughout their checkered history with foreign influence. It may surely be concluded that Israel has had deep problems with such foreign influence throughout its history.

Still, such demands for purity often have fatal consequences. It can easily lead to the certainty that “we are right, and all others are wrong,” thus dividing the world into us and them. And it can give us a superior notion that all others, not like us, are inferior and hence not only inferior but also dangerous to us, leading inexorably to their rejection and ultimate elimination. The lesson of Nazi Germany and its treatment of the Jews spring readily to mind.

And what does all that have to do with Christmas? If the birth of Jesus means anything, and it certainly means a great deal, it surely implies that all persons in the sight of God are equally worthy of receiving the love and grace of that God. The babe in the manger comes that all the people of the planet may receive the promise of peace and joy that God through the son brings. The Torah of Ezra is thus both promise and a warning.

Joy is a hallmark of YHWH’s Torah, but so too is lamentation. And in addition, too strict an adherence to that same Torah and its strict admonitions to separatism and purity can lead to hatred and bigotry that calls out for a constant wariness and a continual certainty that God’s son has come for all the world, not just for a special portion of it. Ezra’s narrative is thus very important in Advent and can serve us well as we await the coming of the one we call Christ, the hope of all the world.