What’s Your Most Influential Pagan Book?

What’s Your Most Influential Pagan Book? January 25, 2019 The Witches Next Door

Patheos Explore the world's faith through different perspectives on religion and spirituality! Patheos has the views of the prevalent religions and spiritualities of the world.
The Witches Next Door have lots of Pagan books. There are shelves dedicated to spell books. A whole section on Pagan history. We have witch books and druid books and goddess books and kitchen witch books and ritual books. Not to mention fiction books about gods and witches, autobiographies of pagan folk, and a few rare, first editions. But, to paraphrase Jrr Tolkien, what if there was just one book to rule them all?
Okay, maybe not rule them all. How about, that one book that changed everything for you. We asked a few of our friends and co-Patheos bloggers to take on the almost impossible task of whittling their collections down to The Book. We included our selections too. So hard! S-O-H-A-R-D!

John Beckett – The Book That Made Me A Druid

Someone else asked me for my favorite Pagan books and I could only narrow it down to four. But the most instrumental book? That would be “A Brief History of the Druids” by Peter Berresford Ellis (1994). It’s still the best account around on the history of the ancient Druids (what little we know about them).
It’s most instrumental in my development as a Pagan and a Druid because up until I found it, I was trying to be a Wiccan – and it wasn’t working. When I discovered Druidry, something in me clicked: “this is what I’m supposed to be!” This wasn’t the first book on Druids that I read, but it was the one that convinced me I had found my path.
Without this book I might have settled on Druidry sooner or later, but I also might have continued trying to be something I wasn’t cut out to be and eventually given up. But I did read “A Brief History of the Druids”, and the rest is my own history.
John Beckett is a dear friend and co-collaborator with The Witches Next Door. You can read more of his excellent work at Under The Ancient Oaks

If I could only chose one book, it would be “Witchcraft for Tomorrow” by Doreen Valiente.  I feel this book was a revelation that Witchcraft didn’t have to be entrenched in ceremonial magic or patriarchal systems – that it could be organic, personal, naturally grounded in the world you live in, wherever that may be.
It’s what I hope Weave the Liminal will be for practitioners today and well into tomorrow.
Laura Tempest Zakroff is an artist, author, dancer, 1980’s wine aficionado and supplier, and is much beloved by The Witches Next Door. You can read more of Tempest’s musings at A Modern Traditional Witch

Lady Charlotte Guest’s translation of “The Mabinogion”, with its inclusion of a twelfth story, the Hanes Taliesin, is by far the One book for me.

There are better translations of the Mab and certainly more accurate versions, but her book was the first to capture my imagination and my heart. I return to it over and over again. The stories in the Mab inform my personal practice, much of the craft I teach is through the lens of the stories in the Mab. And, of course, there’s the tale of Ceridwen and Gwion.

In case you’re curious, there are several non-pagan books that I find indispensable too.

At the tender age of fifteen I started seeking out information about Witchcraft. The second book I picked up (and still have on my bookshelf as you can see in the picture above) was “Buckland’s Complete Book of Witchcraft“ (lovingly referred to as Uncle Bucky’s Big Blue Book). This publication gave a name to all of the beliefs I held. Suddenly I knew that I was not alone in the world. Others worshiped a Goddess, did spells, and believed in magick. It only fueled my desire to want to learn more, try more, read more, explore more. To this day, twenty-five years later, I am still super grateful.

Looking back now, I can still see how it could be helpful to someone just starting out on the path. There have been other books that have changed me, shifted me, inspired me, but this book is the first one that really gave me a footing and sparked my desire to keep walking this path. Actually, this book showed me there was a path to walk.

The book that had the largest impact on myself as a witch is probably “Teen Witch: Wicca for a New Generation” by Silver Ravenwolf, which is also her most controversial offering. It was the first book I could get my paws on and comprehend as a child. Most of all, it showed me that even I could do magick. I would spend hours copying down information into my own little Book of Shadows, which was just a spiral notebook. A few of the spells I still use to this day, though greatly modified over the years from how she originally presents them.

The book received a great deal of criticism from older generations and generations that grew up without her – but Teen Witch and her “To (verb) a (adjective) (noun)” series were some of the most influential books for my generation and almost every author and teacher that I know of my generation holds a special place in their heart for those works.

I sometimes wonder if Silver was single-handedly the one author the was the most responsible for reviving and keeping the Craft alive after the 80s. Luckily, we will never know what it would be like without her works.

Mat Auryn is a Patheos blogger, author, and all around witch sensation. We love Mat. You can follow Mat’s writing at For Puck’s Sake

Irisanya Moon – The Book At The Center Of The Spiral

My one book, “The Spiral Dance: a Rebirth of the Ancient Religion of the Great Goddess” by Starhawk. This was not the first book on Witchcraft I bought. I found most of my information on sparkly Geocities websites with lilting pipe music I couldn’t turn off.
The first book I ever bought was Cunningham’s “Wicca: A Guide for the Solitary Practitioner”. And while it eased me into the world of Wicca, “The Spiral Dance” is the one that proved (and continues to prove) to be the most instrumental in my growth as a Witch.
I didn’t realize when I read Spiral Dance on my work breaks (cover hidden, of course, the Midwest would not have approved) that I would still be guided by it today
Spiral Dance is a book that sounded like me or the me that was remembering me.
I still reread it, review exercises, use chants, and discover ‘hidden’ chapters that only make sense now that I’ve been practicing and teaching in the tradition for a bit. This book called my heart to a home I didn’t know of (yet), where I saw and see myself, challenge and reveal myself, and continue to grow in my witchcraft.
Irisanya is a prolific writer, priestess, friend, and international jetsetter (well, she travels a lot). Read more at her blog Charged by The Goddess

So there you have it folks. Some oldies but goodies and a couple of unexpected books too.

So what’s the one book for you? 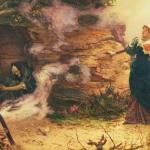 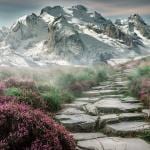 February 7, 2019 The Magic Of Nature: Witching Outdoors
Recent Comments
0 | Leave a Comment
Browse Our Archives
get the latest from
The Witches Next Door
Sign up for our newsletter
POPULAR AT PATHEOS Pagan
1

Is Witchcraft Outgrowing Paganism?
Modern Witch
Related posts from The Witches Next Door