The Pope Emeritus, Benedict XVI, published an article today under the title “Salvation: More Than a Cliché?” It was originally in a 2008 series of essays in German, which Ignatius Press is now publishing for the first time in English. In the article, Benedict explores the depth of terms like “salvation” or “redemption” for Christians. The article is rather academic. I want to point out some of the key points while trying to avoid being too academic.

The Problem of “Redemption”

He opens by explaining the situation of words like “salvation” or “redemption” to the modern Christian:

Redemption is a key word of the Christian faith; it is also one of the Christian words that has been most emptied of meaning: even for believers, it is difficult to discover another reality behind it. When they compare the drudgery of their daily lives, its battles, anxieties, and uncertainties, with the Christian Good News, often it seems to them almost impossible to acknowledge this redemption as something real. Furthermore, the words in which the faith tradition speaks here—atonement, vicarious substitution, sacrifice—have become obscure; all that verbiage produces no true connection with the experiences and insights of human existence today.

He then goes on to speak of an author proposing a more relaxed version of Catholicism.

Initially the expectation of a simpler, more candid, and less regulated Christianity gave wings to the hope that in this way one could again unearth the ruined joy of the Gospel. But immediately it became obvious that behind a loosening of dogma and behind the abandonment of confession, the promised land of the happy freedom of the redeemed does not appear—far from it—but, rather, a waterless waste that only becomes ghastlier the farther one walks.

Then he speaks of how this relates to Jean-Paul Sartre an existentialist author:

In Sartre’s case […] the interior migration ofpaganism, the exodus from the constraints of faith and Church into complete “freedom,” was accomplished down to the last possible boundary, and behold: freedom from God proves to be man’s hell, which, in fact, strangely enough, agrees exactly with the old definition of hell. But might Sartre just have lacked the right program in order to give meaning to this freedom? Certainly, it is no coincidence that, in his bare abandonment in the wilderness of nothingness, he ran across the man who a hundred years earlier had already thought such thoughts and elaborated them into a program for human liberation.

Christianity and honest paganism both focus on redemption. However Christian redemption is a “dependence of love” bringing true freedom

Christian faith and logically consistent paganism along the lines of Marx and Sartre thus have in common the fact that they revolve around the theme of redemption, but in exactly opposite directions. It immediately becomes evident that the real difference does not lie in the question of whether redemption is thought of as being earthly or heavenly, spiritual or secular, otherworldly or this-worldly. These alternatives, which usually dominate the field, are far too shortsighted and conceal the real problem. They are only imprecise consequences of the real alternative: Does redemption occur through liberation from all dependence, or is its sole path the complete dependence of love, which then would also be true freedom?

Pope Emeritus Benedict, goes on to explain how technology affects us.

Technology is an attempt to banish this dominion of the unknown, to domesticate the power of the universe and to leave no unknown power, no untamed force behind. No longer should the universe rule over man but, rather, only man over himself. But this is precisely the cause of the situation that agitates us most today: man’s dominion over man. When the universe no longer rules, man is abandoned to the rule of man, which can often be much more sinister and allows us to see the abysses of uncontrolled power only from the other side.

This technology is an attempt for a human form of salvation.

The first thing that would have to happen, if redemption [by technlogy] were to exist, would therefore be this: that God no longer be the Unknown, the Immovable, the Untouchable; that he no longer be the limit of our freedom, the competitor with our own life. He himself would have to be one with us, if we were supposed to be free. Again—the aim of technology and politics is to make man his own god; but there is a desperate illogic in such attempts. […] In order for that to work, it would have to come from God himself.

Benedict XVI explains how, no matter what happens, guilt remains.

One of the depressing aspects in the experience of being human is that our power to destroy is far greater than our power to heal. The outstanding debt of guilt extends farther than the radius of forgiveness and reparation. The irrevocable drilling power of guilt still preys on people today; it leaves psychiatrists and counselors of all sorts ultimately helpless, because guilt cannot be absolved by knowledge or removed by analysis. It calls for an authority of transformation that goes beyond human ability.

Jesus Comes to Save All

The Pope Emeritus points out how the idea of redemption is not specifically Christian, yet paints our path towards Jesus.

All these questions are not specifically Christian, and, nevertheless, in them we have actually already developed in question form the entire content of the figure of Jesus Christ. Let us go right to the center, to his death. Those who have experienced this death have recognized more and more deeply that his dying was ultimately the act of love that he himself performed, in which he distributed himself, communicated himself completely to his disciples. And this showed that this act of love was in the most profound sense the deed of the love of God himself, in which he, as man, overcame the limits of human love with the power that belongs to God alone.

I highly recommend the whole article but I will warn you that it is a little academic for those not prepared for it. Maybe print it out and read it when you have time.

Note: If you want more like this, please sponsor me on Patreon: $2 a month gets you my weekly summary of Catholic news. 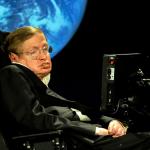 October 21, 2018
Stephen Hawking: Only the Christian View of God Makes Sense
Next Post 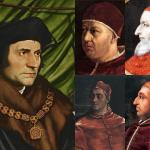 October 25, 2018 What Popes Did Saint Thomas More Die For?
Browse Our Archives
Related posts from Through Catholic Lenses