Pope Francis greeted an autistic girl from Naples at his Wednesday audience this week. It took me a bit to see the video but I want to include the video, the article, and some commentary.

The Pope with an Autistic Girl

The Catholic Register (from Canada) carried the story.

During the Aug. 21 gathering in the Paul VI Audience Hall at the Vatican, Clelia Manfellotti, a 10-year-old girl from Naples diagnosed with autism, walked up the steps to where the Pope was speaking to the crowd.

The Pope told his security detail to “let her be … God speaks” through children, prompting the crowd to erupt in applause. The Pope allowed the girl to move around undisturbed clapping and dancing on the stage.

While greeting the Italian-speaking pilgrims at the end of the audience, Pope Francis reflected on the young girl who is “a victim of an illness and doesn’t know what she is doing.”

“I ask one thing, but everyone should respond in their heart: ‘Did I pray for her; looking at her, did I pray so that the Lord would heal her, would protect her? Did I pray for her parents and for family?’ When we see any person suffering, we must always pray. This situation helps us to ask this question: ‘Did I pray for this person that I have seen, (this person) that is suffering?'” he asked.

The Catholic Register article was accompanied by this video from CNS.

First, I would like to thank the article for using “autistic” over “with autism” as most of us prefer.

Second, I want to make a few remarks on the Pope’s words.

Finally, I think it’s good that the Pope let her be as that showed charity and also helped others see what appears to be stimming without stigmatizing it. I think that the audience’s reaction of clapping shows a certain acceptance of this autistic girl for who she is. I hope that this helps end the stigma.

Let’s keep Pope Francis and this young lady in our prayers. I see actions like this as the start of a change in the Church’s attitude towards autism.

Note: please help support me by sponsoring me on Patreon. I get very little from this writing and rely on donations as a religious. 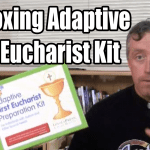 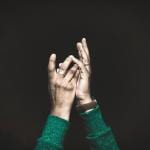 August 28, 2019 Assisted Suicide: How the Church Should Behave and WHY
Browse Our Archives
get the latest from
Through Catholic Lenses
Sign up for our newsletter
POPULAR AT PATHEOS Catholic
1