Come Quickly, Watson, Sherlock Holmes has Need of You 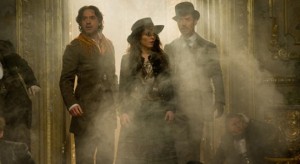 Perhaps you would be willing to assist me in one last mystery. I am afraid that an impersonator has surfaced, pretending to be me in another motion picture. Indeed, he uses my name in the title of his deceitful drama: “Sherlock Holmes: A Game of Shadows.”

I have found the real name of this fellow by sleuthing through the Internet Movie Database, a most stupendous archive of known impersonators, conspirators, con artists, and scallywags the world over. He goes by the moniker Robert Downey Jr.

You will hardly countenance this fact, but he impersonated me in 2009 as well in a drama entitled simply “Sherlock Holmes.”

This impostor relies more on his brawn than his intelligence and on quick one liners than noticing cigarette ash. He does not piece together clues so much as barrel through them.

His tale, such as it is, involves a thug named Moriarty, impersonated by a fellow named Jared Harris. With a series of anarchist bombings threatening the peace of Europe in the 1880s, Moriarty runs a criminal organization that might be connected. The motion picture shows your wedding, my dear boy, and slanders me to no small extent in the process, painting me as a self-centered and distracted friend who barely brings you to the church alive. I trust you find this as absurd as do I.

However, one thing they did portray correctly was my determination not to let any harm come to you or the woman you married. When I push her from the train, it is with the best of intentions. How else would you and I travel throughout Europe, defeat scores of Moriarty’s minions, and explode many things in the process?

When the motion picture focuses on explosions or fights, it does quite well. However, I found the tale woven by this impersonator to be quite confusing. I am still deducing how the Gypsy woman portrayed by Noomi Rapace was involved in the entire mess. Granted, she seems to fire a gun well and know her way around a munitions factory, but her role in the affair remains murky.

I must admit I was amused by the scene in which my brother walks around in the buff, shouting at his ancient butler. I don’t know who this Stephen Fry is, but he captured Mycroft to a T. Other scenes – and I refer to the one in which I dress as a woman – are in rather poor taste, although I did hear rougher elements of the audience laughing scandalously.

Although I am flattered by the revival of my name and character, this Robert Downey Jr.’s efforts to bring me to the screen have about as much in common with me as this young trollop Lindsay Lohan does with Marilyn Monroe. He has none of my brilliance, my attention to detail, my quick ability to piece together facts. He is in some ways similar to a certain Captain Jack Sparrow of whom I hear people speak.

You must come at once, Watson, and find this rapscallion with me. Together, we can restore my once illustrious name.

PS They call this motion picture PG-13, which I presume means that although the bodices are tight, none are removed and although bombs explode, no one dies horrible deaths. 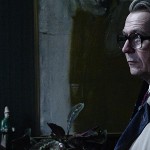 Why Do Some Women Stay with...
Terry Gaspard
Related posts from Tinsel