A Nerd’s Eye View of Comic-Con

San Diego Comic Con is the beginning of my fiscal year, my Chinese New Year – the four days of the Con forming a cusp between all I’ve loved in pop culture over the last twelve months and all I look forward to ahead. Our theme this year is looking for Comic Con miracles, launched yesterday when we went to pick up our badges, a normally hours long process of standing in a line of giddy anticipation. Yesterday we got in line at noon, knowing the scheduled start time for badge pick up was 3pm. When they opened the line at 1pm we suddenly gained the whole afternoon to pore over the schedules and, most importantly, nap. Kudos to the Con! Our first CC miracle. 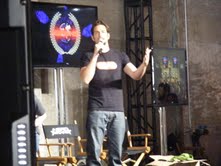 Comic Con spills out of the Convention Center into the Gaslamp Quarter of downtown San Diego. First thing on today’s agenda was Nerd HQ – Zachary Levi’s (Chuck, Tangled) brainchild of an off-site hang-out on Seventh Ave. where you can eat, play the latest game releases and get up-close and personal with the casts and creators of your favorite shows.

Hourly panels held at Nerd HQ include casts from shows (Psych, Chuck, Robot Chicken) and films (The Expendables 2), and creators like Joss Whedon and Damon Lindelof. Most if not all these will be in panels at Comic Con itself, but with no guarantee of getting into those panels it’s worth the $20 ticket price to see your favorites, especially since all proceeds go to Operation Smile!

Each panel is moderated by Zach himself with the infectious enthusiasm not of a star, but of someone who really believes in doing good with what you’ve been given. Watch Zach for a few minutes and you won’t be surprised to learn he is a man of deep faith and strong family ties. His sister helps run Nerd HQ and his dad stood off to the side watching today. We enjoyed back to back panels of Psych (with Dule Hill, James Roday, writer Steve Franks and producers Chris Henze and Kelly Kulchak) and Chuck (nearly the entire cast.) Seating at the panels is limited to 200 people and the Q&A format provides an intimate experience just short of having a private lunch. If you can afford it (and survive the head-banging experience of the still evolving ticket sales)

Nerd HQ panels are the highlight of the Con. To give you an idea of their popularity, 20,000 ticket buyers hit the site simultaneously this year, crashing the servers and pushing sales back a day. In other words, business as usual regarding ticket sales for anything related to Comic Con! To stay up to date on Nerd Machine events (the parent org of Nerd HQ), panels and tickets sales for next years Nerd HQ, check out www.thenerdmachine.com. All the panels can be watched on streaming at http://www.break.com/nerdmachine-2012-livestream/live-from-nerd-hq-chuck-pt-1-2347642 Very cool on their part!

Each year The Syfy Channel takes over the café of The Hard Rock Hotel. The past three years it’s been turned into Eureka’s Café Diem and now, with Eureka ending, its been morphed into the Defiance Café. Defiance doesn’t launch until April 2013, but Syfy is giving it a long promotional lead time as the show aims to chart new territory in TV programming. Set in a world of alien/human war, Defiance will run a television show and online MMO side by side, apparently the action of the game determining some of the course of the show.

With Eureka and Warehouse 13 Syfy created some pretty family friendly shows – well, by basic cable standards – but Defiance looks to be much more along the lines of Fox’s Falling Skies, and the online game is billed as a first-person shooter, so parental oversight may be called for. The game can be played at the booths of Defiance Café and when we head back over there again we’ll try and get our hands on the controls. At $17 for a salad though…it better be good.

The afternoon held two of my favorite panels. “Hungry for Dystopia” included writers of young adult dystopian literature talking about what motivated them to create their similar yet vastly different storylines. Get it? HUNGRY for dystopia, as in The Hunger Games? I didn’t because I still don’t understand why they call it The Hunger Games anyway. But I digress…the best moment by far was during audience questions, when a young boy approached the mic, baffled by how to get up to it. When a kindly audience member leaned it over to him he eloquently asked whether the authors felt writing dystopian literature made them adopt a more cynical viewpoint. My sister, a pediatrician, commented that is typical of that age – they can fix your iPad for you but can’t figure out how to get up on the table to reach it.

We couldn’t get into the Science Channel’s Stuff You Should Know panel on “Time Travel: Science Fact or Science Fiction” so we grumped on down to the Expo hall. More on that tomorrow, the Expo hall deserves lots of attention on its own. Next came “The Science of Science Fiction” featuring writers and producers from Prometheus, Thor, Eureka, Battlestar Galactica, X-Men: First Class and more.

This is where I turn into an uber-nerd as I’d love to devote pages to these people with their incredible mix of brainiac intelligence, pop culture knowledge and writing ability, but I’m afraid it’s just a “me” thing. I’m always amazed that these sessions don’t have lines out the door and down the block like the panels for Twilight and Dexter. Maybe the writers need to sparkle?

The crux of this session was twofold. 1) Writers need to build a world, create scientific rules for it and stick to the rules. At the end of the day nobody cares HOW Thor’s hammer works, but if it suddenly does something outside the set of accepted rules, the audience checks out. 2) When the writers know more science they have more options. That doesn’t mean they have to understand all the science, but they need to take the time to work through it with their science consultants. This truly is a panel that celebrates the sometimes rocky marriage of entertainment and science professionals – opposite sides of the science-fiction coin. 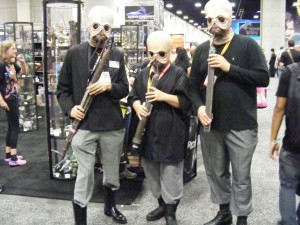 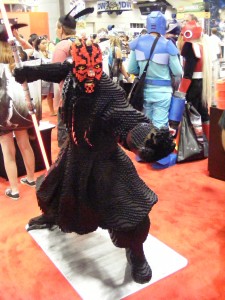 There are parties at bars and freestanding displays all over the Gaslamp Quarter of San Diego tonight but we aren’t cool enough to go to some (read: over 30) and just weren’t interested in others. I understand the History Channel is here with a nationwide grilling tour but it was packed out tonight. Comic-Con normally does a fantastic job providing shuttles from hotels all over the city to the convention center but things seem a little off-kilter this year. By the time we saw the line for the shuttle back to our hotel we decided to forgo the downtown fun and get some sleep. Still, it’s midnight as I I wrap up day one in that glorious ether of excitement and exhaustion that typifies the Con.

I leave you with the unofficial Rules of the Con we are making up as we go along:

The sweetest, funniest, geekiest oogling I saw today was a group of fan boys when a group of Disney princesses walked by. The fully covered kind, not the Little Mermaid kind. If we want to change how women are portrayed in science fiction, how ‘bout we don’t perpetuate the stereotype? But alas, that’s a who different post for a whole different day. 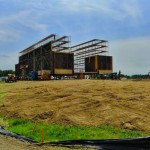 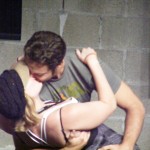 4 responses to “A Nerd’s Eye View of Comic-Con”