Update: I was pleased to see that Catholic convert and blogger Mark Shea chose these scriptural passages as the inspiration for column at Inside Catholic.  Check it out here.

This post is about what seemed to me to be an inconsistency in the Gospel, but is not meant to be a debunking of Christianity or an explanation of why I do not believe (I’ll be trying my hand at that later in the day).  Therefore, I’m not trying to start an argument about the truth of the Bible in this post, I’m just curious what explanation Christians have for this conflict. 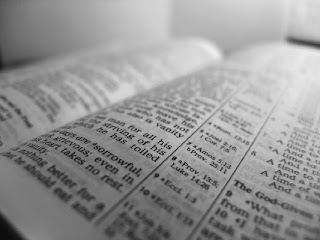 Yesterday, at Mass, I was mystified by the reading for the service.  You can refer back to all the readings for Sunday here, but the one that confused me was the Gospel passage from Luke 16:19-31.  The passage isn’t long, so you may prefer to click through, but here’s the quick summary.

Jesus’s Parable of Lazarus and the Rich Man
A rich man lives in comfort, ignoring the beggar Lazarus who aches for even the scraps from the rich man’s table.  After they both die, Lazarus is with Abraham, while the rich man sufferers torments.  He asks if Lazarus could offer him any comfort, even a drop of water, but Lazarus cannot cross the gulf that separates the wicked from the righteous.  The rich man then asks if Abraham would send Lazarus to the world of the living to warn the rich man’s brothers, so they might avoid his error.  Abraham tells him that he will not.  “They have Moses and the prophets. Let them listen to them,” Abraham says.  The rich man pleads, saying that surely they will believe if they see a man return from the dead.  But Abraham says again, “If they will not listen to Moses and the prophets, neither will they be persuaded if someone should rise from the dead.”

And then. eight chapters later, Jesus rises from the dead. 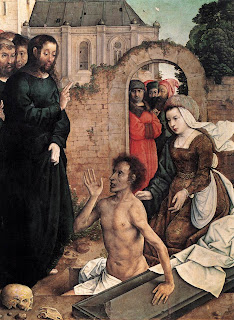 Perhaps this is a outsider/atheist thing to be perplexed by, but I was extremely confused by this passage.  My questions were not answered in the sermon, which dwelt on sins of commission versus sins of omission.  I wanted to know more about the rich man after death, not why he had been sent there.  If miracles and resurrections are a crutch for the faithless, why did Jesus need to be publicly resurrected at all?

I understand that there could be a lot of reasons offered for why Jesus is a special case, and I’m perfectly willing to concede that Jesus might not be a reasonable counterexample to his own parable, but I’m still aware of a couple others.  After all, when the parable began, I assumes the Lazarus that Jesus referred to was the only Lazarus that I had heard of: the Lazarus that Jesus raised from the dead in John 11:1-45.

Why should the people who had rejected Jesus’s teachings when they heard them get the encouragement that the rich man was refused?  Why should Paul get a personal appearance from Jesus on the road to Damascus, when his colleagues were allowed to go on persecuting the Christians.  If the answer is “God moves in mysterious ways,” why bother telling the parable?

I look forward to your responses on this question, but I have another favor to ask.  When I was turned down from RCIA, I was disappointed because I was looking forward to the discussions of the week’s readings.  Does anyone have an email list or websiter that offers interesting commentary/background on Sunday’s reading?  Thanks!

September 28, 2010 Why I Don't Believe: Unconvincing Conversions
Recent Comments
94 Comments | Leave a Comment
"On that note... I recommend every Catholic and Christian have that post a read. Click ..."
Oktavian Zamoyski Effective Altruism and Caritas [Radio Readings]
"I think too many people have grandiose and unnatural ideas about charity. It becomes a ..."
Oktavian Zamoyski Effective Altruism and Caritas [Radio Readings]
"Jesus wasn’t resurrected as a great miracle simply in order to convince people to believe ..."
John The Two-Lazarus Problem
"The cartoon is amusing, but flawed. One of the four virtues of Stoicism is Justice; ..."
Vulpes Inculta 7QT: Stoicism Man, Semi-Imaginary Money, and ..."
Browse Our Archives
Related posts from Unequally Yoked