As a true blue Democrat, the events of Tuesday night were a little hard for me to take, so I’m going to need the blogging equivalent of chocolate (good for Dementors and defeats) to be able to go on.  Here goes:

From a photo caption from a story about Merle Haggard (via Jeff Weintraub):

The documentary was filmed over three years. Among those interviewed were his two ex-wives, Kris Kristofferson and Robert Duvall.

Oh man, even amusing grammar errors that help to show why Team Oxford Comma is in the right are not helping relieve my despair.  Time to bring out the big pro-grammar guns.  From a commenter at Column 8 come these new lyrics for Gilbert and Sullivan’s song “I’ve Got a Little List” from The Mikado:

As some day it must happen that a victim must be found,
I’ve got a little list (I’ve got a little list)
Of grammatical offenders who might well be underground
And who never would be missed (who never would be missed!):
The apostrophe of ownership that never knows it’s place;
The people who spell ‘there’ as ‘their’ and others of they’re race;
The much-maligned ellipsis at the end of every thought . . .
And those who write in capitals AS IF THEY RULE THE COURT;
The emails lacking hyphens, though the rest of us insist –
They’d none of them be missed! (They’d none of them be missed!)”

Still not quite recovered. Time to go to a happy place: 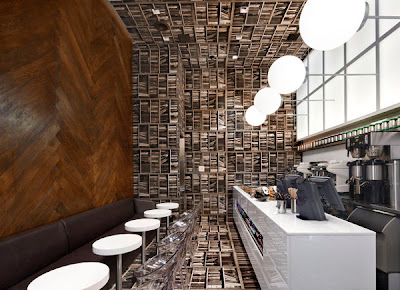 Why yes, that is a cafe whose walls and floors are patterned to look like bookshelves.  I’m feeling better already.  (h/t Make Magazine)

All right. I am slightly recovered.  Back on my normal topics: I was not aware that there was a group of schismatic Catholics here in New Haven.  Their origin?  The usual story:

“[Being turned away from seminary] was a call to action for me,” Smith says. “That I’m a homosexual person does not matter to God. We should treat each other the way Jesus treated others.”
To Smith, God is a small-c catholic. His love is omnipresent, never-ending and absolute. Being blocked from “the call of Christ” was a revelation to Smith: The universal Roman Catholic Church wasn’t universal after all…
He could have taken the road most traveled by seeking solace in the Episcopal Church or another “open and affirming” high-church Protestant sect. But Catholicism was in his blood. He couldn’t leave but he couldn’t stay.

I have no idea why Smith identifies as a big-C Catholic, rather than simply identifying as a Christian.  Maybe I’ll take a walk over and ask.
–5–

Atheist blogger Jen McCreight has an excellent take-down of a shoddily researched article on the dearth of prominent female atheists that ran in Ms Magazine.  Here’s a preview:

But you know why female atheists aren’t as well known?
Because you don’t talk about them, even in a piece about female atheists.
If you ask “New Atheists” who are actively involved in the movement – bloggers, writers, student leaders – who their favorite atheists are, their lists are quite diverse. We don’t just ramble off the names of the Four Horsemen like drones. I’d tell you how much I love Friendly Atheist, and Skepchick, and Greta Christina.
You are the ones who are only reporting about the men.
Maybe people would start associating female, or racially diverse, or younger people with contemporary atheism if the media actually started mentioning female, or racially diverse, or younger people.

There’s a debate starting up between Joe Carter of First Things and Barrett Brown of the League of Ordinary Gentlemen.  They’re debating the nature of “Atheism, Christianity, and the State” and you can read all posts in the debate here.

Moving on from the election?  Who am I kidding?  I still haven’t worked the cramp out of my hand from refreshing fivethirtyeight.com.

November 4, 2010
Why do atheists ask boring questions?
Next Post