Hi visitors from Conversion Diary, and welcome.  This week I’ve been focusing on a defence of covenant marriage from a non-religious perspective, which is still in progress (the next post in the series will go up this afternoon).

For regular readers of this blog, I’m going to respond to some of the questions raised by yesterday’s post this weekend, but, in the meantime, I thought I’d share this very apropos cartoon from Dinosaur Comics: 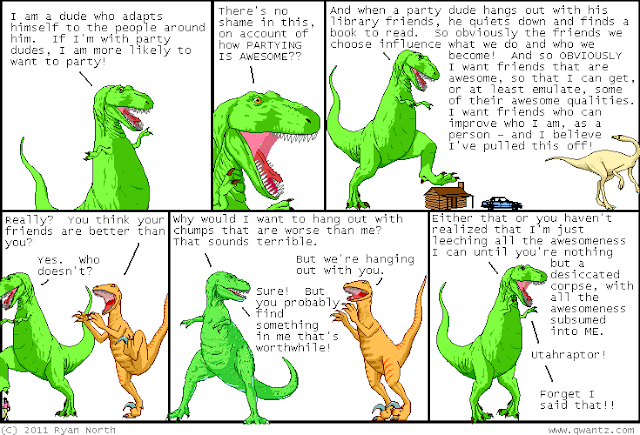 Chris Stefanick wrote a great take-down of pop songs’ unhealthy ideas about love in a column for the Archdiocese of Denver. Here’s an except, but click though for the whole thing:

In the song “Animal” by Neon Trees, vocalist Tyler Glenn sings: “We’re sick like animals … I won’t be denied by … the animal inside of you. … Take a bite of my heart tonight.” Tyler, you and anyone who looks like you won’t be dating my daughter. The lesson of this song is echoed in countless others: If it isn’t promiscuous it isn’t passion.

And Miranda Cosgrove, a Nickelodeon (i.e., children’s TV channel) actress, in “Kissing You” sings to her boyfriend before an audience of millions of pre-teen girls, “When I’m kissing you it all starts making sense!” And answers to questions like, “Are you the one I should trust?” become “crystal clear… when I’m kissin’ you.”

Thanks in large part to misguided love songs, teens tend to mistake things like codependence, enmeshment and promiscuity for love. It’s funny how the things they come to look for in dating relationships are precisely the things that set them up for failed marriages.

By the way, I’ve only heard of one of the several pop songs he listed.  Looks like my membership in the Society of Stodgy Old Codgers Who Would Like You to Please Get Off My Lawn is unendangered.

In related news, Yale’s production of Stephen Sondheim’s Assassins is going up this weekend, and I got to see it tonight.  The show was excellent, unfortunately for any classmates reading this, immediately sold out all four shows and then was forced to add a fifth performance, which immediately sold out.  The musical chronicles the actions and motivations of everyone who attempted to kill a president.

The video below is “Unworthy of Your Love” which, in the show, is a duet between Squeaky Fromme and John Hinkley (the video linked is from a Sondheim concert, not a performance of the show).  Both assassins are passionately, psychotically devoted to Charles Manson and Jodie Foster respectively.  Their duet, set to music that is a send-up of 1970s standards has frightening, self-abasing lyrics, but those lyrics could fit comfortably into the pop songs that Stefanick skewers above.

I don’t endorse all of the choices of example that Mark Shea made in his “False Courage and True Courage” essay for Inside Catholic, but I think it’s important reading.  Shea is taking aim at the idea that the choice to do the wrong thing for a greater good requires a particular courage that goes hand-in-hand with real leadership.  This disturbing idea keeps gaining force in our unending “War on Terror” and I’m glad for as many allies as possible on my side of this fight.
–5–
Also at Inside Catholic, I really enjoyed John Zmirak’s “Satan: A Tapeworm” essay (inspired by the upcoming release of The Rite).  Go check it out, I’ll just pique your interest with this quote:

[I]t bothers me that so many of the movies promoted this way are not really “spiritual,” much less Christian; they’re simply bland and inoffensive.

The Catholic faith is neither. In fact, like really authentic Mexican food (think habeneros and fried crickets), it is at once both pungent and offensive. It offends me all the time, with the outrageous demands it makes of my fallen nature and the sheer weirdness of its claims. It asserts that, behind the veil of day-to-day schlepping, of work and laundry and television and microwaved burritos, we live on the front lines of a savage spiritual war waged by invisible entities (deathless malevolent demons and benevolent dead saints) whose winners will enjoy eternal happiness with a resurrected rabbi, and whose losers will writhe forever in unquenchable fire. Sometimes I step back and find myself saying in Jerry Seinfeld’s voice: What’s with all the craziness? Why can’t I just enjoy my soup?

I’ve previously written about my opposition to football due to the risk of concussion and dementia and the NFL’s see-no-evil approach to these risks.  Ta Nehisi-Coates wrote an excellent piece on this topic for The Atlantic.  I’ve excerpted it below, but it really deserves to be read in its entirety.

In some measure, pro football is quite beautiful because it gives us human beings willingly giving up themselves for something they love. I don’t have any real way to relate to that. The closest I can come (and this is not very close) is to imagine a world where I knew writing would likely knock a few decades off my life. I think I’m a little different from my peers, in that I’ve never felt fit for much else. Perhaps in that world I’d be prompted to discover I was wrong. But as I am, I think I’d lose the years.

This is a separate question from the responsibility of the viewer. There’s no real reason why I have to sit and watch Hines Ward destroy his body. He may be welcome to the right, but I don’t have to subsidize that right. In all honesty, I think I do because there’s something of my own aspirations in the thing. To commit yourself so completely, to stand for a militant vivacity, instead of a bland longevity is attractive and inspiring. I think of Emmitt Smith and his separated shoulder at the most awkward, and seemingly, inappropriate times. I think of Muhammad Ali giving his body to George Foreman, and then refusing to punch as he falls, as a kind of masterwork.

Ta Nehisi-Coates’s take can be applied to far more sports than football.  Gymnastics in particular has always struck me as a sport centered on a peculiar mortification/reshaping of the body.  What seems unique about football is that this particular harm is not a risk players knowingly undertook, particularly considering the deliberate deception practiced by the NFL.

Not to mention, quasi-dualist that I am, I have a particular horror of brain injury.

–7–
Today, I’ve got a new op-ed up in the Yale Daily News.  Here’s an excerpt from “Delegating and Disenfranchising“

Conservatives pushing localism forget that many of the institutions that foster oversight and engagement on the national level do not exist or are profoundly atrophied at the local level. I’m from Long Island, and, although I receive excellent national news coverage and reporting on Manhattan from the New York Times, I’m usually at a loss to find any articles on local races. Newsday, Long Island’s biggest paper, has been conducting round after round of layoffs, and local news shows primarily cover snow closings and murder investigations.

In the absence of healthy local journalism, politicians can get away with anything. In my school district, I watched candidates get away with dirty tricks like claiming the school budget had to be defeated because it was full of hidden costs. When we went to school board meetings to ask her to provide evidence to back up her claims, she told us she couldn’t, since the costs were too well hidden. The budget was voted down, but the secret line items were never found.

That’s all for now.  See you later today for the marriage series update!

January 29, 2011 I Assign You Reading!
Recent Comments
99 Comments | Leave a Comment
"Do You Know what isn't Fair? Calling Atheism a Religion. Or saying Dawkins is a ..."
skwills Who Gets to Give the Courtier’s ..."
"Oh! And you can get there via Naval Gazing.(probably not by Navel Gazing...)"
TheSparksFlyUpward Too Sucky To Be True
"Hello, Deiseach!1. This is not an ad. (It always reassures me when someone says that!! ..."
TheSparksFlyUpward Too Sucky To Be True
""Do you honestly think that a child raised by a woman has no exposure to ..."
Zorin 2012 Queer Blogathon [Index Post]
Browse Our Archives
get the latest from
Catholic
Sign up for our newsletter
POPULAR AT PATHEOS Catholic
1