What Marriage is Not 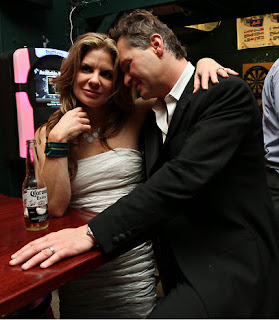 Over winter break, a controversial profile appeared in The New York Times‘s Vows column.  The NYT featured a pair of newlyweds who had left their previous spouses and broken up their original families in order to be with each other.  The article drew a lot of criticism from both sides of the culture war.  Here are some choice excerpts from the profile:

But it was hard to ignore their easy rapport. They got each other’s jokes and finished each other’s sentences. They shared a similar rhythm in the way they talked and moved. The very things one hopes to find in another person, but not when you’re married to someone else.

Ms. Riddell said she remembered crying in the shower, asking: “Why am I being punished? Why did someone throw him in my path when I can’t have him?”

All they had were their feelings, which Ms. Riddell described as “unconditional and all-encompassing.”

“I came to realize it wasn’t a punishment, it was a gift,” she said. “But I had to earn it. Were we brave enough to hold hands and jump?”

Like most of the people who read who read the profile, I disapproved.  If you read the full article, you’ll notice that neither one of the remarried spouses complains of any problems in their first marriage.  There’s no mention of neglect or abuse, they don’t even claim they dislike their first spouses.  They just like the new ones better.

My freshman sociology professor would call these two “daters and raters.”   When in a relationship, they compare all other possible relationships to their current one on an essentially even playing field.  The person they’re with is not judged to be worth more if the current squeeze doesn’t make them happier than a new person would.  It’s a surprisingly common mindset, especially given how ridiculous it looks in practice.

I knew a boy who, whenever he expressed admiration for another girl’s looks, would turn guiltily to his girlfriend and quickly add something like “but not as pretty as you.”  I always thought this was ridiculous.  Presumably he wasn’t dating his girlfriend on the grounds that she was the single most attractive person in the world.  If he ran into a girl he thought was prettier, he wouldn’t have broken up with his girlfriend.

Relationships (especially marriage) do not endure because your partner is the absolutely ideal person for you to be with.  I don’t believe in soulmates; I don’t believe in having one person on Earth I am ‘meant for.’  A good relationship satisfies the goal of marriage (which I am going to discuss in more detail in the next few posts), but it is not the pursuit of the optomization of one’s partner.

In the brouhaha that followed the piece, I was surprised at how many complaints were coming from people on my side of the aisle.  When I have fights with some of my liberal friends about marriage, they tend to defend a very individual-focused idea of marriage.  The purpose of marriage is to promote happiness and satisfaction.  If someone no longer makes you happy or as happy as you could be with someone else, the marriage should be terminated, they tell me.  To my mind, that’s exactly the principle the NYT couple was following.

I’d be curious to know if my anti-marriage, pro-autonomy friends were bothered by the decisions of the couple linked above.  I don’t see how a relationship founded on ‘dater and rater’ ideas can ever be stable or satisfying.  Over the next few days, I’ll be talking about the values that seem to promote stable, beneficial relationships.

January 22, 2011 Evolution is Not Destiny
Recent Comments
89 Comments | Leave a Comment
"On that note... I recommend every Catholic and Christian have that post a read. Click ..."
Oktavian Zamoyski Effective Altruism and Caritas [Radio Readings]
"I think too many people have grandiose and unnatural ideas about charity. It becomes a ..."
Oktavian Zamoyski Effective Altruism and Caritas [Radio Readings]
"Jesus wasn’t resurrected as a great miracle simply in order to convince people to believe ..."
John The Two-Lazarus Problem
"The cartoon is amusing, but flawed. One of the four virtues of Stoicism is Justice; ..."
Vulpes Inculta 7QT: Stoicism Man, Semi-Imaginary Money, and ..."
Browse Our Archives
Related posts from Unequally Yoked