What’s Wrong with my Atheism? 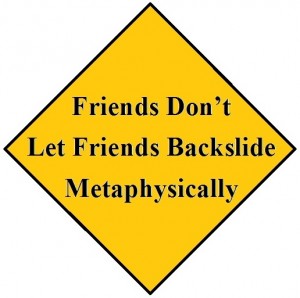 I mentioned in a recent post on moral philosophy that, although I understand why Christians think I should switch teams, I’m confused and frustrated by the comments of “Convert already!” I get from my atheist friends.  One of my college friends posted a cogent sum-up of the inconsistency he sees (reformatted slightly from facebook):

I don’t think anything you’re espousing is incompatible with atheism. I do think you may be using metaphysical backsliding as an excuse for not engaging with metaphysics.

That sounds a little weird, so let me try and put it another way: you’ve said, and I agree, that atheism without elaboration is boring and insubstantial. your response to this, unless I’m missing something important — which I might well be, and do tell me if I am — is elaborating, at length, your brand of atheistic moral theory, which is laudable.

But the great strength of religion, to me, and especially of Christianity (which is your main target) is that, in theology, it unites morals with metaphysics. That which we, as fallible humans, ought do, and that which we do but should not do, is illuminated by the word of God and the example of Christ.

Meanwhile, you write a great deal about what we ought do, without any non-pragmatic reason for why. How do you construe your role? Are you just trying to hold us to the basic moral precepts you assume in good faith we all hold, but, in proper social-scientific fashion, correcting our means? Or are you aiming for a broader theory of your brand of atheism? And if it’s the latter, since you reject postmodernism and all its post-metaphysical tendencies, with what do you replace the metaphysical-rather-than-moral hole left by the death of god? (If the answer’s in a series of posts I never read, by all means just link to those.)

For now, I’d be very curious whether any atheist readers of this blog have run into this problem and if you’ve come up with solutions.  Do you jettison metaphysics?  Do you ditch objective morality?  Are you forced to hedge all your moral imperatives?

My very cursory answer is that I don’t know that I believe the death of god deals a serious wound to the study of metaphysics.  The Greek philosophers were confident in moral order and telos without the benefit of particularly well-behaved deities.  Look for more on this after this weekend.  I’m meeting with a Dominican friar to discuss Edward Feser’s The Last Superstition: A Refutation of the New Atheism and there’s going to be a lot of Aristotelianism on the table..

January 13, 2012 7 Quick Takes (1/13/12)
Recent Comments
190 Comments | Leave a Comment
"Jesus wasn’t resurrected as a great miracle simply in order to convince people to believe ..."
John The Two-Lazarus Problem
"The cartoon is amusing, but flawed. One of the four virtues of Stoicism is Justice; ..."
Vulpes Inculta 7QT: Stoicism Man, Semi-Imaginary Money, and ..."
"Do You Know what isn't Fair? Calling Atheism a Religion. Or saying Dawkins is a ..."
skwills Who Gets to Give the Courtier’s ..."
"Oh! And you can get there via Naval Gazing.(probably not by Navel Gazing...)"
TheSparksFlyUpward Too Sucky To Be True
Browse Our Archives
get the latest from
Catholic
Sign up for our newsletter
POPULAR AT PATHEOS Catholic
1