Hands down, the most delightful story I read this week was in the Science Tuesday section of the NYT.  As a child, actor Alan Alda asked a teacher what caused a flame and was confused by the answer “oxidation.”

The old question about the flame came back when the journal Science asked Mr. Alda to write an editorial about communicating science. His article began with the anecdote.

Then he thought, why not also create a contest where anyone — including scientists — could offer an explanation of a flame, and recruit 11-year-olds to judge which one is the best?

That is what he and Stony Brook did, setting up a Web site, http://flamechallenge.org, to collect entries, which can be video, graphics or just words.

Having the explanations judged by an 11 year old seems to be a particularly brilliant touch.  And this story is as good a reason as any to remind you that I keep a link to dy/dan, an excellent blog run by a math teacher in my sidebar.

My general geekery means my “Get Excited and Make Things” t-shirt generally gets worn every single laundry cycle.  So I was interested in this quite short film that explains the origins of the original “Keep Calm and Carry On” design.

And speaking of made things to get excited about, I really enjoyed the explanation TYWKIWDBI found of how shot used to be made:

Shot towers harness the effects of surface tension on liquids in free-fall, a technique developed in 1782. Molten lead can be poured through a strainer at the top of a tower or shaft. The droplets become spherical as they fall and cool in this shape during their descent. The pellets are caught in a water basin to break their fall and finish cooling.

In 1830 a businessman from Green Bay, Wisconsin named Daniel Whitney was traveling along the Wisconsin River and recognized a sharp bluff near the town of Helena as a promising location for a shot tower. Lead deposits had recently been discovered in several locations around Iowa County. From the top of the bluff there was a 60-foot (18 m) sheer drop, below which the sandstone cliff sloped down to the riverbank, 180 feet (55 m) below the clifftop.

I abjure the new Lorax movie and reject it in all it’s forms, but I’ll admit there was one positive knock-on effect.  Apparently, people have been tweeting Shakespearean plots in the style of Seuss (the tag is #SeussSpeare).  Noah Millman has listed some of the best.  Among my favorites:

“Peaseblossom and Mustardseed, bring me some brew!” said the Ass on the Grass to Thing One and Thing Two.

Would you, could you, while at prayer? Kill him! Kill him! He is there!

Speaking of updates on literary classics, I was intrigued by Michael Saler’s take on why Sherlock Holmes continues to fascinate:

The solution to the case is one that is neither impossible nor even improbable: Holmes made reason enchanting. In the modern age, reason is often seen to be the panacea for our ills, but it can also be the source of them. Rationality seems to “disenchant” the world, removing the elements of wonder, surprise, and purpose that allegedly characterized the “premodern” world. “The disenchantment of the world” was a much-discussed issue in the late nineteenth century, one that vexed Conan Doyle. His detective, however, re-enchanted modernity through the distinctive use of reason.

Unlike many contemporary scientists and logicians who disdained the imagination, Holmes brought reason and the imagination, logic and intuition, together in a new synthesis that he called “the scientific use of the imagination.” He made critical thinking into a romantic adventure. Through his discerning eye, every detail of modern life, from newspaper advertisements to the footsteps of a giant hound, became charged with meaning, possibility, and wonder. 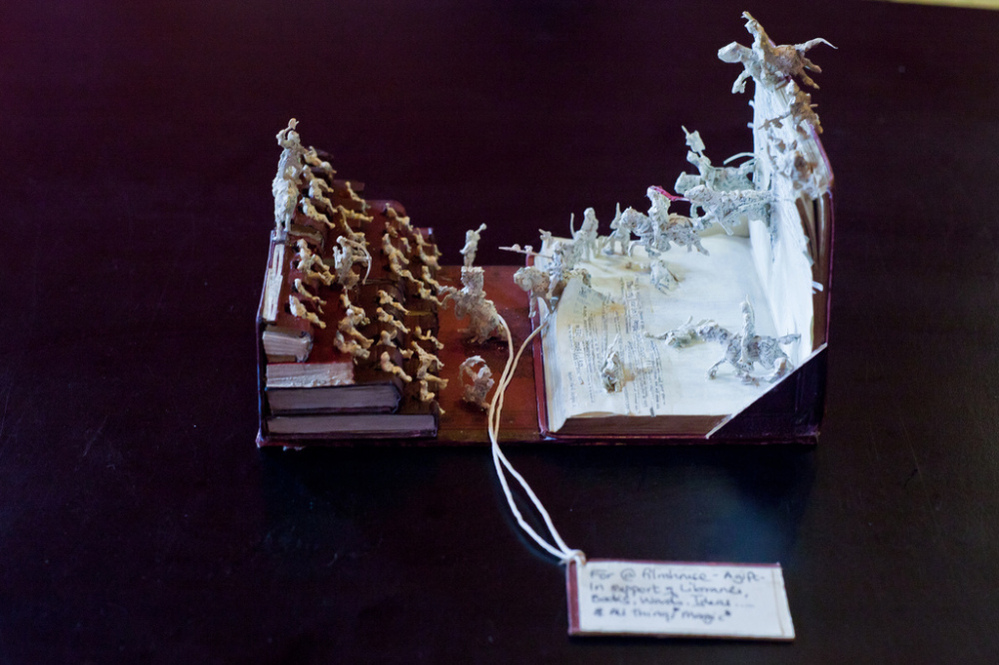 And if you’re looking for an enchanting mystery, check out this NPR story about Scottish librarians trying to discover who was leaving intricate book sculptures on their shelves.   The story’s too good to excerpt, so I’ll just pull a description of one of the pieces:

Next came a movie theater, one of Edinburgh’s local art film houses. It got, out of nowhere, a book carved so that a bunch of warriors seemed to be leaping (or in some cases galloping) off a movie screen straight into a startled audience. One of the audience members, if you looked closely, was wearing a tiny photo of the face of mystery writer Ian Rankin. The mystery deepened.

Finally, just a reminder that you can vote once per day for the About.com Atheism Awards.  I’m one of five nominees for Best Atheist Blog.  More details here.

March 10, 2012 Two Questions for Christian Readers
Recent Comments
75 Comments | Leave a Comment
"Jesus wasn’t resurrected as a great miracle simply in order to convince people to believe ..."
John The Two-Lazarus Problem
"The cartoon is amusing, but flawed. One of the four virtues of Stoicism is Justice; ..."
Vulpes Inculta 7QT: Stoicism Man, Semi-Imaginary Money, and ..."
"Do You Know what isn't Fair? Calling Atheism a Religion. Or saying Dawkins is a ..."
skwills Who Gets to Give the Courtier’s ..."
"Oh! And you can get there via Naval Gazing.(probably not by Navel Gazing...)"
TheSparksFlyUpward Too Sucky To Be True
Browse Our Archives
get the latest from
Catholic
Sign up for our newsletter
POPULAR AT PATHEOS Catholic
1