The anti-gnostic cooking project continues on apace.  This week I made cheddar-chive scones (the second thing I’ve ever cooked!). 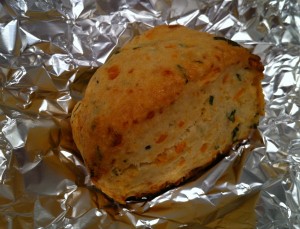 Some friends came over and nommed them up with me while we watched Of Gods and Men which is (a) stellar and (b) also helpfully anti-gnostic in its own way.

I’d appreciate any easy recipes I could attempt in the future (but be patient, I’m travelling the next two weekends).  And keep in mind that I’m picky eater and I hate most food (but especially meat, tomato sauce, and many colloids).

While I’m trying to cultivate an appreciation for the concrete and physical, maybe some of you want to spend more time getting into the abstract.  It’s your last chance to sign up for Udacity’s new set of seven week computer science classes.  I just did the p-set for my Web Application Engineering class and I’m pretty excited.  The intro class has no prerequisites and by the end of the term, you’ll have build a bare-bones search engine.  Woo! What does it say about me that I’ve never (to my knowledge) heard a Tupac song, but I have heard of the Pepper’s Ghost setup that was used to set up a faux-holograph for his performance?  The trick is pretty cool (and Ars Technica has a good explanation) and it’s the kind of thing you can try at home for Halloween depending on the layout of your house.

The Tupac hologram turned out to be an illusory illusion instead of true hologram, but you have my word of honor that the picture below is not any kind of trick: 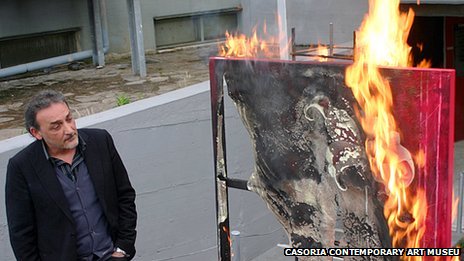 An Italian art museum, frustrated by a lack of funding, has started burning paintings.  Like a supervillian, they’ve pledged to burn three paintings a week until their demands are met.  So far, all the artists have consented to their works being torched, but that could change at any time.

The last Quick Take featured a questionable use of fire, but I’m sure we can all agree that the below video (via Win!) is objectively awesome:

To continue the theme of objective awesomeness, here’s Jim Henson’s original pitch for the Muppet Show:

And to close it off, the only thing cooler than pennyfarthings:

April 21, 2012 "What's Hard is Simple, What's Natural Comes Hard"
Recent Comments
104 Comments | Leave a Comment
"Jesus wasn’t resurrected as a great miracle simply in order to convince people to believe ..."
John The Two-Lazarus Problem
"The cartoon is amusing, but flawed. One of the four virtues of Stoicism is Justice; ..."
Vulpes Inculta 7QT: Stoicism Man, Semi-Imaginary Money, and ..."
"Do You Know what isn't Fair? Calling Atheism a Religion. Or saying Dawkins is a ..."
skwills Who Gets to Give the Courtier’s ..."
"Oh! And you can get there via Naval Gazing.(probably not by Navel Gazing...)"
TheSparksFlyUpward Too Sucky To Be True
Browse Our Archives
get the latest from
Catholic
Sign up for our newsletter
POPULAR AT PATHEOS Catholic
1