The Paralympics are happening, and interesting links abound!  First up, this promotional video for the Games:

The BBC has a good rundown of the differences between the Olympics and the Paralympics, including some explanations of how some sports are modified.  For example:

One of the most important aids to the blind swimmer is the tapper. Standing at each end of the pool is a person holding a long pole with a soft circular ball on the end. As the swimmer approaches they are tapped on the head.

It is a sign to the swimmer that the end of the pool is approaching, and the confidence gained by the tapper’s presence means the swimmer can move at full pelt without fearing a painful crash at the end.

Meanwhile The Atlantic‘s In Focus feature has a number of extraordinary pictures, including these gloves of a wheelchair racer:

But amid the glamour shots is some sobering reporting:

Cambodia has the world’s highest percentage of amputees yet it is sending just one athlete to the Paralympics, an event critics say increasingly favors nations that can afford the latest high tech gear.

Many Paralympic athletes have continuing medical needs and…

Oh, the heck with it, I’m just looking for an excuse to show you a picture of an MRI machine with all its cladding stripped off.

That photo gave you an inside view of medical equipment, and this blog post will let you see the workings of medical training. Ilana Yurkiewicz is blogging about her med school experiences for Scientific American and is writing about the difficult moment when students start to practice on real patients:

The answer used to be live animals. Before the 1980s, surgeons-in-training practiced on live dogs. They then switched to pigs, which were believed less likely to incite protests from animal rights activists. They were wrong. In 1994, 77 out of 125 medical schools in the U.S. practiced live animal surgeries. By 2011, only seven remained. Many medical schools cited the draw of new, better techniques as the reason for the decline, but it’s hard to deny the influence of lawsuits and bad press, too.

Today, the big thing is electronic mannequins, which look and behave strikingly similar to real patients. They ask for help. They tell you when it hurts. Place a stethoscope over them, and you can hear heart and lung sounds. There are even ones who give birth. A 2011 survey by the Association of American Medical Colleges found that over 90% of 89 medical schools that responded used mannequins in their teaching.

And they are indeed memorable. My first experience with a simulator was my very first week of medical school. He came to the fictitious emergency room complaining of chest pain. A group of us huddled awkwardly around him, asking him questions about when it started, what he had been doing, and what his other symptoms were. When we exhausted our questions, we ordered a chest X-ray. Meanwhile, his blood pressure began dropping dangerously fast. “I’m not feeling so well docs…” he kept saying breathlessly. Unsure what to do, we stood around even more clumsily, telling him we were working on it but actually watching him die, clueless on how to stop it.

And to follow the tenuous thread of Quick Takes continuity, students in other disciplines face different kinds of challenging questions.  This week, I finished reading Are You Smart Enough to Work at Google, which had an assortment of puzzles, but the parts I liked best were focused on the intellectual history of job interviews.  And that’s where I found this:

In Britain, applicants to Oxford and Cambridge have long been subjected to difficult admissions interviews.  “Oxbridge” questions include puzzles and philosophical paradozes, often with a distinctly British air of whimsy.  …And, to Cambridge theology students, this poser: Could there be a Second Coming if mankind disappeared from the planet?

So, to bring the Takes full circle, let’s take culture clashes (and attendant misunderstandings and resentments) and bring them back to London, the host of the Paralympic games.  Via Flowing Data, here’s a map of the most common surnames in London. 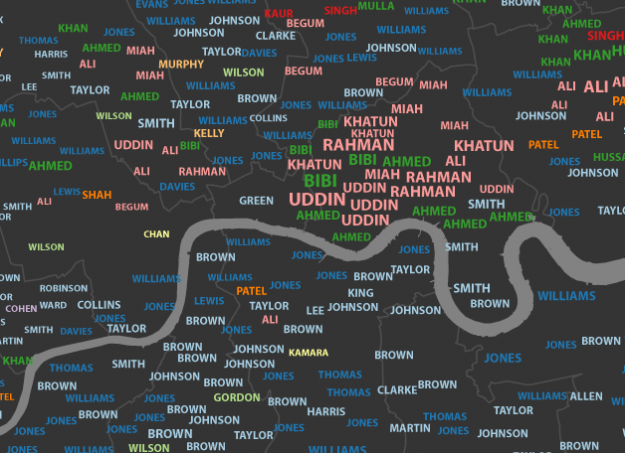 At the site proper, you can play around with the granularity of the visualization.

August 31, 2012 Welcome JT Eberhard to Patheos!
Recent Comments
109 Comments | Leave a Comment
Browse Our Archives
get the latest from
Catholic
Sign up for our newsletter
POPULAR AT PATHEOS Catholic
1