JT Eberhard, formerly of FreeThought Blogs and the Secular Student Alliance is moving to Patheos today! 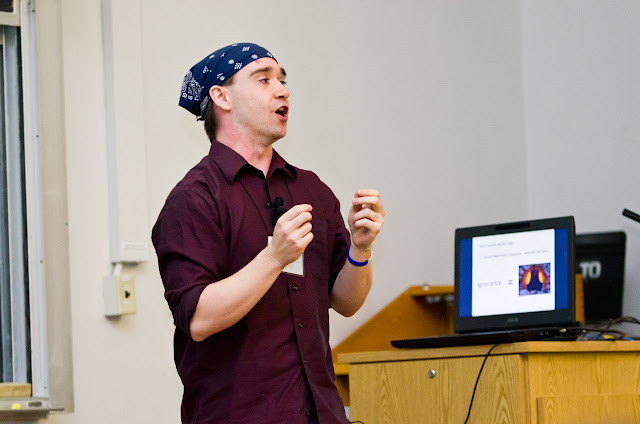 And given that he’s already lit into Timothy Dalrymple before he moved, I imagine it will be a high-spirited housewarming party.  So, before the punch bowl gets overturned, I would like to propose a toast (not that kind!).

JT did great work for the Secular Student Alliance.  (And, honestly, for Christians as well).  The kind of tradition that needs to graft itself onto the public schools to survive, that grows by coercion and chokes out other voices, that festers into threats and blatant disregard for the law deserves to lose.  If you’re fighting for souls, you have to fight fair, or it doesn’t count.  Through his work at the SSA, JT protected all students from inappropriate incursions into schools, and protected Christians (against their will, most of the time) from dishonoring their cause with their methods.

This meant that JT ended up spending a lot of his time (and much more time than I could stand) tangling with unsophisticated trolls.  It’s not the only kind of writing he does — he’s a fierce feminist, speaks openly about his struggles with anorexia, and has a posse of guest bloggers, including his dad — but it does represent a sizable chuck of his writing and I have a limited tolerance for that fight.

I don’t know if I have a tone problem with JT, since I give myself an easy out by only picking fights with people who seem intellectually honest, engaged, and personally challenging.  He does the kind of trench-fighting that I just can’t motivate myself to write on, pre or post-conversion.  For me, it means practicing being short-tempered and contemptuous; other people may be able to compartmentalize those feelings or avoid them entirely, but I don’t seem to be able to pull that off, so I don’t touch the stuff.

Yvain recently announced that he’s going to read and blog through Edward Feser’s The Last Superstition and his opening comments on Feser’s aggressive tone seem apropos:

I have only a short time tonight, so I want to concentrate on I, the mountains of abuse that Prof. Feser heaps upon atheism for several chapters before the book begins and at very regular intervals throughout. In particular, I want to say exactly what I think about this style of unabashedly and unnecessarily nasty polemic.

…Looking back, I realize how much of what I have learned in life I learned for terrible reasons. When I was young, I read some books about the Lost Continent of Atlantis, and wanted to see if it really existed. After devouring a bunch of ancient history and mythology it turned out it probably didn’t, but this was a much quicker way to learn lots of ancient history and mythology than picking up The Oxford Compendium Of Extremely Dry Scholarly Papers About Near Eastern Pottery and hoping for the best. Reading Velikovsky didn’t hurt either. And how many people would know anything about evolution nowadays if you didn’t have to read TalkOrigins to debate creationists?

I guess what I’m saying is that it’s really hard for me to really learn unless something is pushing me. When you’re young and you have a lot of unanswered questions you have a lot of push. When you grow older and start accreting answers to those questions, it’s harder and that’s bad, even though some of your answers might be wrong or meaningless.

I don’t get jazzed in quite the same way.  I love getting aggressive, but, for me, that’s easiest when I feel a little bit scared (either I’m wrong and I might need to lose or that I’m right and people in the audience will succumb unless I run a good defense).  Feser’s jibes didn’t help me get there, but the content did.

But,  as fun as tactical debates are, I’ve got a slightly more personal reason for liking JT.  After my conversion announcement, JT has one of the nicest atheist responses: he said he was confused.   He thinks I’m wrong, natch, but he flagged it as weird that someone like me would make this kind of error, and tried to figure out what was going on.

I then proceeded to schedule myself into oblivion (still haven’t even rewritten the About Me tab), so I’ve only done one post so far responding to his good-faith questions to me.  But I guess that means another installment will make the perfect housewarming present this weekend.

September 1, 2012 Your daily dose of anti-gnosticism!
Recent Comments
154 Comments | Leave a Comment
Browse Our Archives
get the latest from
Catholic
Sign up for our newsletter
POPULAR AT PATHEOS Catholic
1