This is my last post for the Patheos Atheist Portal

Update: I’m starting to work through the comments section and respond here.

For several years, a lot of my friends have been telling me I had an inconsistent and unsustainable philosophy.  “A virtue ethicist atheist whose transhumanism seems to be rooted in dualism?  Who won’t shut up about moral lapses as wounds to the soul and keeps trying to convince us it’s better to be sinned against than sinning?  Who has started talking about mortifying her pride and keeps pulling out Lewis and Chesterton quotes?  C’mon, convert already.”

I could see where they were coming from, but I stayed put.  I was ready to admit that there were parts of Christianity and Catholicism that seemed like a pretty good match for the bits of my moral system that I was most sure of, while meanwhile my own philosophy was pretty kludged together and not particularly satisfactory.  But I couldn’t pick consistency over my construction project as long as I didn’t believe it was true.

While I kept working, I tried to keep my eyes open for ways I could test which world I was in, but a lot of the evidence for Christianity was only compelling to me if I at least presupposed Deism.  Meanwhile, on the other side, I kept running into moral philosophers who seemed really helpful, until I discovered that their study of virtue ethics has led them to take a tumble into the Tiber.  (I’m looking at you, MacIntyre!).

Then, the night before Palm Sunday (I have excellent liturgical timing), I was up at my alma mater for an alumni debate.  I had another round of translating a lot of principles out of Catholic in order to use them in my speech, which prompted the now traditional heckling from my friends.  After the debate, I buttonholed a Christian friend for another argument.  During the discussion, he prodded me on where I thought moral law came from in my metaphysics.  I talked about morality as though it were some kind of Platonic form, remote from the plane that humans existed on.  He wanted to know where the connection was.

I could hypothesize how a Forms-material world link would work in the case of mathematics (a little long and off topic for this post, but pretty much the canonical idea of recognizing Two-ness as the quality that’s shared by two chairs and two houses, etc.  Once you get the natural numbers, the rest of mathematics is in your grasp).  But I didn’t have an analogue for how humans got bootstrap up to get even a partial understanding of objective moral law.

I’ve heard some explanations that try to bake morality into the natural world by reaching for evolutionary psychology.  They argue that moral dispositions are evolutionarily triumphant over selfishness, or they talk about group selection, or something else.  Usually, these proposed solutions radically misunderstand a) evolution b) moral philosophy or c) both.  I didn’t think the answer was there.  My friend pressed me to stop beating up on other people’s explanations and offer one of my own.

“You must have some idea.”

“I don’t know.  I’ve got nothing.  I guess Morality just loves me or something.”

It turns out I did.

I believed that the Moral Law wasn’t just a Platonic truth, abstract and distant.  It turns out I actually believed it was some kind of Person, as well as Truth.  And there was one religion that seemed like the most promising way to reach back to that living Truth.  I asked my friend what he suggest we do now, and we prayed the night office of the Liturgy of the Hours together (I’ve kept up with that since).  Then I suggested hugs and playing Mumford and Sons really, really loudly.

After I changed my mind, I decided to take a little time to make sure I really believed what I thought I believed, before telling my friends, family, and, now, all of you.  That left me with the question of what to do about my atheism blog.  My solution was to just not write anything I disagreed with.  Enough of my friends had accused me of writing in a crypto-Catholic style that I figured no one would notice if I were actually crypto-Catholic for a month and a half (i.e. everything from “Upon this ROC…” on) .  That means you already have a bit of a preview of what has and hasn’t changed.  I’m still confused about the Church’s teachings on homosexuality, I still need to do a lot of work to accept gifts graciously, and I still love steam engines.

Starting tomorrow, this blog is moving to the the Patheos Catholic channel (the url and RSS will remain unchanged).  Meanwhile, I’m in RCIA classes at a DC parish, so you can look forward to more Parsing Catholicism tags (and after the discussion of universalism we had last week, I think it will be prudent to add a “Possibly Heretical” category).

This post isn’t the final word on my conversion.  I’m sure there’s a lot more explaining and arguing to do, so be a little charitable in your read of this post and try to give me a little time to expand my ideas over the next few weeks.  (Based on my in-person arguments to date, it seems like most of my atheist friends disagree two or three steps back from my deciding Morality is actually God.  They usually diverge back around the bit where I assert morality, like math, is objective and independent of humans.  As one of my friends said, “Well, I guess if I were a weird quasi-Platonist virtue ethicist, this would probably convince me”).

And how am I doing?  Well, I’m baking now (cracking eggs is pretty much the least gnostic thing I can do, since it’s so, so disgusting to touch, and putting effort into food as more than the ransom my body demands for continued function is the second least gnostic).  I’ve been using the Liturgy of the Hours and St. Patrick’s Breastplate for most of my prayer attempts.  and, over all, I feel a bit like Valentine in this speech from Arcadia.

It makes me so happy… A door like this has cracked open five or six times since we got up on our hind legs. It’s the best possible time to be alive, when almost everything you thought you knew is wrong.

June 18, 2012 Doing Comment Triage [check back for updates]
Recent Comments
3,128 Comments | Leave a Comment
"On that note... I recommend every Catholic and Christian have that post a read. Click ..."
Oktavian Zamoyski Effective Altruism and Caritas [Radio Readings]
"I think too many people have grandiose and unnatural ideas about charity. It becomes a ..."
Oktavian Zamoyski Effective Altruism and Caritas [Radio Readings]
"Jesus wasn’t resurrected as a great miracle simply in order to convince people to believe ..."
John The Two-Lazarus Problem
"The cartoon is amusing, but flawed. One of the four virtues of Stoicism is Justice; ..."
Vulpes Inculta 7QT: Stoicism Man, Semi-Imaginary Money, and ..."
Browse Our Archives
Related posts from Unequally Yoked 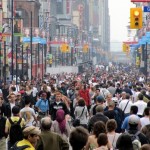 Catholic
How much should you trust your empathy?
Unequally Yoked
TRENDING AT PATHEOS Catholic