In the midst of the discussion on how to translate “I AM THAT I AM” into languages that don’t have a “to be” verb (like ASL), I found out the following things:

The reasoning behind this project eluded me, but, according to Wikipedia, some scholars saw an urgent need:

“To be” prevents us from experiencing a shared reality; something we need in order to communicate in a sane way. If someone sees something completely different than another, our language prevents us from acknowledging the other’s point of view by limiting our perception to fixed states. For example, if I say “Star Wars is a shitty movie,” and my friend says, “Star Wars is not a shitty movie!” We have no shared reality, for in our language, truth lies in only one of our statements and we can forever argue these truths until one of us writes a book and has more authority than the other. If on the other hand I say, “I hated Star Wars,” I state my opinion as observed through my own senses. I state a more accurate reality by not claiming that Star Wars “is” anything, as it could “be” anything to anyone.

An interesting argument, but I’ve got a counterexample.  The delightfulness of this portrait of the Bowdoin Tug of War team (circa 1891) doesn’t vary, no matter who views it. Found at My Daguerrotype Boyfriend

Back to the annals of logic and precision: a college friend shared this excerpt from his logic textbook on Facebook this week:

The method of conditional proof is used extensively in everyday reasoning.

Some years ago Bill was trying to decide whether to take English 301, Postmodernism. His friend Sarah claimed that if Bill takes Postmodernism, he will not get into medical school. Sarah’s argument, when challenged by Bill, took the form of a conditional proof, combined with a proof by cases.

Unfortunately for Bill, he had already succumbed to postmodernism, and so rejected Sarah’s argument. He went ahead and took the course, failed chemistry, and did not get into medical school. He’s now a wealthy lobbyist in Washington. Sarah is an executive in the computer industry in California.

Returning to visual splendor: When a motorcycle show hires bodypaint specialists and yoga practitioners, the below results.

It took me a while to notice and process the construction of the human bike.  Fashionably Geek has a behind the scenes video.

I’ve got enough links to alternate graphics and logic the rest of the way through the takes.  Yvain has a great post up talking about how “uncharitable arguing” looks a lot like modeling other people’s thought processes badly.  He makes his explanation easier for me  to follow by adding examples in pseudo code, but your mileage may vary.  I think you ought to take a crack at it though.  A preview:

Care to guess the title of this sculpture from Iceland before you scroll down? 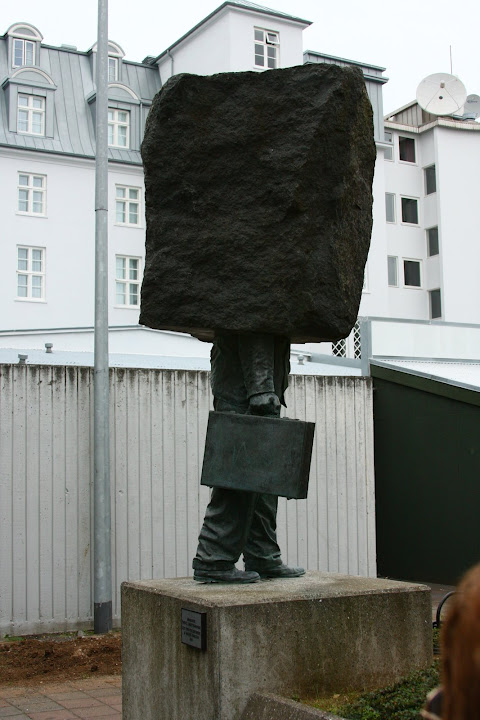 “Memorial to the Unknown Bureaucrat” (made by Magnús Tómasson in 1994).

To close out the logic Takes, Jacob Harris wrote an interesting essay for the Nieman Journalism Lab some time ago “In Praise of Impractical Programming”

If students only take one programming course, professors want them to be able to build something when they’re done. Even MIT itself replaced the Lambda Mystery Cult in 2009 with a simplified course based on Python and robotics meant for students who might not be majoring in computer science. The reasoning was that programming itself had changed since the ’80s; developers no longer built whole systems from nothing; now they merely plugged together existing libraries to get something that worked. This is true for much of the programming work out there — but I am gloomily reminded of Prospero renouncing his magic.

And yet, I feel like 6.001 (and the rest of the gloriously impractical CS program at MIT) made me a better programmer. Its very impracticality forced me to understand the broader world of computer science instead of just focusing on a very narrow end-of-term goal, like building a website or learning SQL. This might be a mawkishly unconvincing argument, but at least I’m in good company; as usual, Paul Graham expresses this better than I ever could. I may not have used Scheme in years — in fact, I use the same practical tools as you. But I don’t just use a hammer: I know how its form was derived and how it could be adapted to new problems. I think this is what impractical computer science instruction gave me.

P.S. Hey, didja notice that, after I mentioned E-Prime, I wrote all the rest of the takes in E-Prime? (Blockquotes don’t count).

October 18, 2012
Want to do a mitzvah for Greta Christina?
Next Post

October 19, 2012 Objective Morality and Hard to Get at Truths
Recent Comments
14 Comments | Leave a Comment
"Back to Square 1 ... ¯\_(ツ)_/¯Season 3!G.657BW.CO/d5573Y"
Bobby Klein My Good Catch Catches Them All
"We all are meme thiefes here 😂🙃fM.9226B.US/fA5573BU"
VanguardAI Books on deck for me for ..."
"To understand an art, you must understand phynomena."
Unlcuky13 I’m speaking about my conversion in ..."
"Despite the differences in level, it's still an excellent manga.pt.2632W.US/U5573xM"
Pilzkeks Dissecting the Catholic Vote for FiveThirtyEight
Browse Our Archives
Related posts from Unequally Yoked