There’s been some discussion this week about what happens after death to the soul, but this New York Times article (“Giving New Life to Vultures to Restore a Human Ritual of Death“) is focused on a religious concern about what happens to the body.

Fifteen years after vultures disappeared from Mumbai’s skies, the Parsi community here intends to build two aviaries at one of its most sacred sites so that the giant scavengers can once again devour human corpses…

The plan is the result of six years of negotiations between Parsi leaders and the Indian government to revive a centuries-old practice that seeks to protect the ancient elements — air, earth, fire and water — from being polluted by either burial or cremation. And along the way, both sides hope the effort will contribute to the revival of two species of vulture that are nearing extinction. The government would provide the initial population of birds.

In last week’s Quick Takes, I had recommendations for books to give as gifts (and if you’re giving anything else, I’d much appreciate you using the affiliate links in that post to place your orders), but this week, io9 turned up a free book you can enjoy right now.  It’s called Scientific Amusements, it turned up in the library of Harry Houdini, and it tells you, among other things, a handy trick for cracking nuts with falling knives: 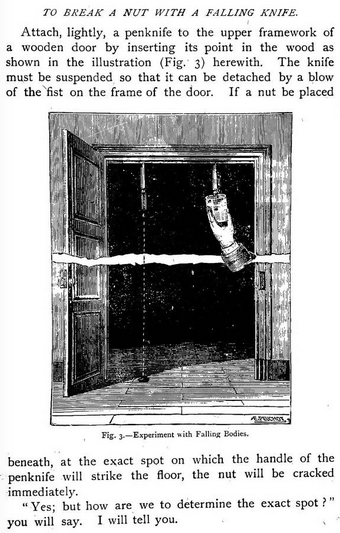 I included Hilary Mantel’s Wolf Hall in my best of the year list, and I was delighted to find an NPR interview Terry Gross did with Mantel over Thanksgiving.  In keeping with the holiday season, the discussion was heavy on the beheadings.

MANTEL: Yes, it seems strange to us, doesn’t it, but for a while they – the people at the Tower of London didn’t know whether Anne was to be beheaded or burned. And, you know, typical bureaucrats, they’re sending frantic notes saying: What kind of scaffold have we to build? When you look at it through the bureaucratic language, it all becomes even more chilling because to them it’s just an administrative problem. They just want to get things done efficiently.

After all, it’s not every day that one executes a queen of England.

GROSS: So I’m not sure if this is something you’ve thought about before or not, but I know that you wrote, I think it was your very first book, about the French Revolution, and now you’ve written about Henry VIII, and there are several beheadings in these books. So excuse me for asking this, but if you had to be beheaded centuries ago, would you have preferred the guillotine, or the axe or sword customarily used in England?

I know this makes me a terrible East Coast liberal, but I hate listening to NPR.  Or any radio or books on tape.  My eyes get bored!  So, I only listen to even my favorite book on tape while I’m doing something eye-intensive like embroidery or weaving.  And, although I love NPR’s stories, I always read the transcripts.

That means I hadn’t ever heard Terry Gross’s voice til I saw this short, wonderful video:

Remember a while ago when I went to that CFAR minicamp and mentioned the calibration game?  Well, Andrew Critch has polished the app up a bit and put together a nice little website to refer to when you’re recommending the game to others.

After the election, I had a lot of fun looking at cartograms that resized states by population, and I quite enjoyed stumbling across the periodic table resized by relative abundance of each element on earth.

And finally, this past week my housemates put up Christmas and Hanukkah decorations (everyone is at least part Jewish chez moi and two of us are Catholic). The following exchange occurred:

‎Housemate One: I didn’t think the the lights would cover the whole tree, but it turns out we have more than enough!
Housemate Two: It’s a Christmas miracle!
Me: I’m pretty sure that’s the Hanukkah miracle.

And that’s all the excuse I need to link to the Maccabeats’ Candlelight: 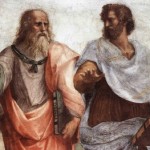 December 6, 2012
Can you Cyrano de Bergerac your moral philosophy?
Next Post 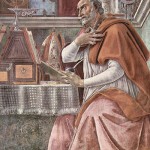 December 7, 2012 My Friday Obligation
Recent Comments
105 Comments | Leave a Comment
"I'd love to see a video of how it works. keranique shampoo reviews"
Marlene Garza Welcome Camels with Hammers to Patheos!
"Logismoi (the plural of logismos) are a fairly simple concept; they are whispers from either ..."
Rob, Portland Logismoi, Vampires, and Other Intrusive Thoughts
"I imagine I’ll do a lot more reading and pick a lot more fights over ..."
Donalbain A little about the queer stuff
"You are part of a search and rescue for lost Catholics.Regular updates to the countdown ..."
Edward Palamar I’m keynoting at a Con for ..."
Browse Our Archives
Follow Us!