I recently picked up Leigh Bardugo’s two novels Shadow and Bone and Siege and Storm, both of which I enjoyed.  [Note, the Amazon description of book two includes major spoilers for book one].  I got interested in Bardugo after reading one of her short stories, “The Witch of Duva” on Tor.com.  I definitely recommend checking it out.

And if I haven’t enticed you enough, the opening sentence of the story is: “There was a time when the woods near Duva ate girls.”

I like Bardugo’s approach to worldbuilding (and the fact that apparently her books fall into a genre called ‘tsarpunk’) so I’d like to share this quote from an appearance she did with John Scalzi:

Shadow and Bone began at the end of a darkened hall in an unfamiliar house. It began with my hand scrabbling along the wall for the light switch, sure that I could hear something breathing in the dark, something with too many teeth, waiting for me to inch just a little closer.

After I reined in my heart rate, talked sense to myself, made it to the bathroom and back to my bed, I lay awake thinking of what it was like to cross that hallway and I began to wonder, “What if darkness was a place?”

In fantasy, darkness usually operates as a metaphor—for evil, destruction, chaos, dogs and cats living together. I wanted to take something figurative and make it literal. And, of course, once I gave this wasteland substance, the logical next step was to fill it full of monsters, creatures just as bad as anything you might imagine lurking under your bed or slithering beneath the closet door. They would be blind from years spent living and breeding in the dark, but able to scent human prey from miles away. They’d be pure predators, with batlike wings so that they could come at you from any direction.

I could see a girl there, drawing light to her, leading a regiment through this nightmare territory. But what the heck were they doing there? What would lead our heroes to do battle in the dark? They could be after some magical object, but that felt a little too easy. So I tried the same trick again: I took something figurative and made it literal; I decided to tear a country apart.

The Shadow Fold (as my wasteland came to be called) would stretch from north to south across the country of Ravka. It would act as a kind of reverse blockade, separating eastern Ravka from its only coastline, leaving it landlocked, cut off from its ports and harbors. To trade with the outside world, to obtain finished goods and the weapons and ammunition needed to defend its borders, Ravka would have to find ways to cross the Fold and fend off its monsters, risking life and treasure every time. In this way, the Fold became not only a physical obstacle, but a way for me to put an entire nation in an economic chokehold and squeeze. (Don’t worry, I’m perfectly pleasant at dinner parties.)

Meanwhile, apropos of maybe various eras being revived in unexpectedly beautiful ways?  Yeah, that’ll do for a transition.  Someone created a prototype of an instrument that Leonardo da Vinci invented but never built.  It’s a combination of a piano and a cello.  Instead of sounding the strings by striking them with a hammer, this instrument lowers them onto a constantly moving bow.  It’s beautiful and strange to listen to:

It’s a good week for reviving old techniques and crafts.  Danish archer Lars Anderson has been practising high speed archery by eschewing a quiver, as he believes archers used to.  What I like best is the different ways he demonstrates the advantages of his approach.  It’s one thing to give timed demonstrations of how fast you can loose ten arrows compared to other archers or to show how many arrows you can fire before the first hits the ground.

But what I really like is when he and his cameraperson decide to show you that this is also a good way to shoot whilst falling from heights!  And a nice way to pick off targets from the back of a motorcycle!

The next link is the second weirdest update of historical art I found recently.  Wim Delvoye designs stained glass window panels that take their patterns from x-rays.  The leftmost one in the image below is sourced from intestines. 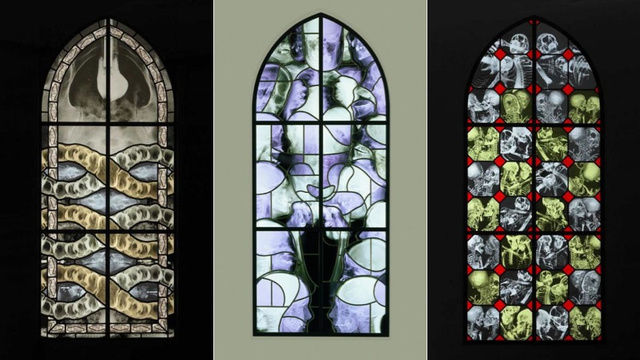 I did say second weirdest, didn’t I?  The strangest was furnished by Grok, who is frequently active in the comment sections.  Go ahead, read this lede, and try to guess what Ms Angelucci did with her glut of vintage pictures.

Sara Angelucci had been collecting vintage photographs for many years and wasn’t quite sure what to do with them. Although she found many of the fiber-based photographs to be beautiful, she also found them to be heartbreaking—she was the keeper of a memory of someone perhaps long forgotten. “They seemed so lost and misplaced, and no one cared about them anyone,” she said about the photographs. “It was heartbreaking to see these lost personages.”

(I’ll leave some space to screen you from spoilers)

Did you guess photoshop the women into bird hybrids?  If so, you win a point!  You can see more at the link. 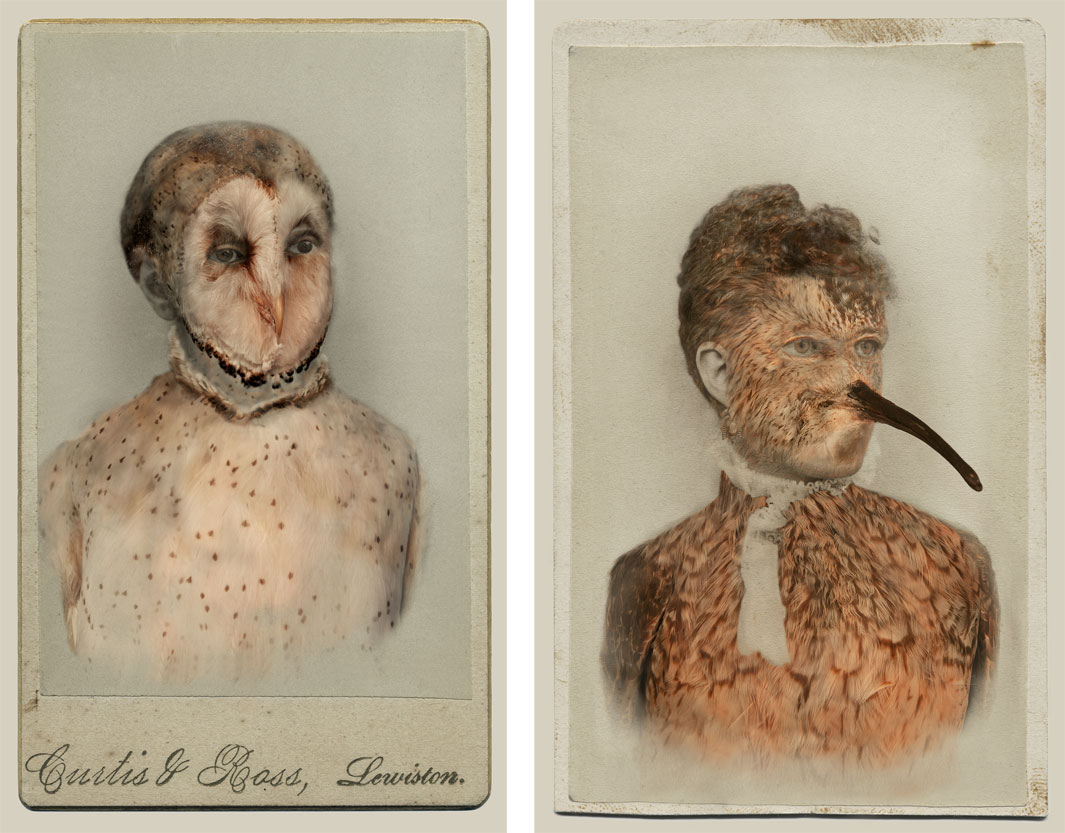 Finally, readers of Proust in the United States are starting to mount their challenges to the celebrations of Joyce for Bloomsday.  The New York Times has the details on how Proust lovers plan to conduct their peripatetic reading.

The marathon in question is a weeklong “nomadic reading” of Marcel Proust’s “Swann’s Way” that will celebrate the centennial of that first installment of “In Search of Lost Time” by bringing Proust’s endlessly subdividing sentences, microscopic self-consciousness and, yes, plenty of madeleines to seven Proust-appropriate locations across New York City.

In Mr. Glass’s case, that would be a bed in a room at the Wythe Hotel in Williamsburg, Brooklyn, where, at 7 p.m. on Friday, he will recite the book’s opening — “For a long time, I went to bed early” — from under the covers before passing the baton, so to speak, to the next in a chain of nearly 120 readers recruited by the French Embassy’s cultural services division.

“There’s a corny literalness that I appreciate,” Mr. Glass said by telephone, before admitting that his knowledge of the book, perhaps appropriately, lay more in the realm of Proustian memory than recent experience. “Besides, when the French Embassy asks you to do something, you say yes.”

Also, I’m much prouder of this than whatever happens at the Harvard-Yale Game tomorrow.  Boola boola!

The Yale reading, by contrast, will emphasize Proust’s asthmatic, indoor spirit, though a team of students from Yale’s drama school has been offering coaching sessions to help the 100-plus participants avoid becoming stuck in syntactic dead ends, to say nothing of actual respiratory attacks. “His sentences are completely energetic, and you are completely out of breath reading him,” Ms. Kaplan said. “It’s the asthmatic teaching us breath control.” 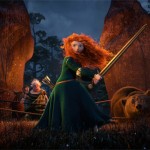 November 21, 2013
The Selfishness of Playing to Your Strengths
Next Post

November 23, 2013 Football is not healthy for children and other living beings
Recent Comments
1 Comment | Leave a Comment
"Oh! And you can get there via Naval Gazing.(probably not by Navel Gazing...)"
TheSparksFlyUpward Too Sucky To Be True
"Hello, Deiseach!1. This is not an ad. (It always reassures me when someone says that!! ..."
TheSparksFlyUpward Too Sucky To Be True
""Do you honestly think that a child raised by a woman has no exposure to ..."
Zorin 2012 Queer Blogathon [Index Post]
"I'd love to see a video of how it works. keranique shampoo reviews"
Marlene Garza Welcome Camels with Hammers to Patheos!
Browse Our Archives
get the latest from
Catholic
Sign up for our newsletter
POPULAR AT PATHEOS Catholic
1