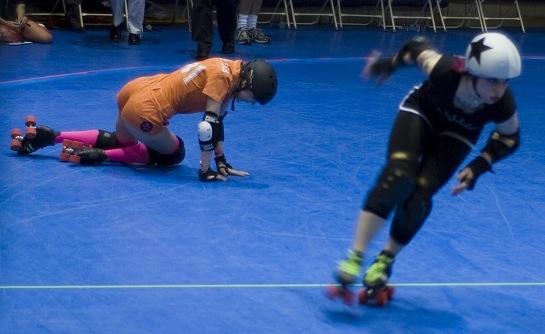 In two of my recent posts for The American Conservative, I got to review Megan McArdle’s The Up Side of Down: Why Failing Well Is the Key to Success and to take a crack at improving a not quite fubar’d health insurance survey.  I’m also still pleased that my editor let me get away with using the roller derby image above as the featured image for the McArdle.  I can still remember, from the one time I went to a roller derby bootcamp, the coach saying “Fall up!  Fall up! Don’t lose momentum!”

It’s easy for courts outside Hawaii to assume that the criminals in their jails must be choosing recidivism, and soft nudges won’t be enough to get them back on track. Humans also have a tendency to rationalize punishment as justice—if the penalty is harsh, the prisoner must be really awful. As Eve Tushnet pointed out in her analysis of the Mississippi woman prosecuted for having a stillbirth, we even have a tendency to hope that the misfortune of others is due to some intrinsic flaw, so that we can pretend we’re exempt from bad luck.

Our society needs better social scripts for failure, since we have more power to react to upheavals than to prevent them. As McArdle narrates, institutions and individuals are blinded by biases and bad heuristics, and wind up perpetuating a throw-away culture. We struggle to prevent problems from turning into catastrophes, and we’re reluctant to sift through the wreckage to see what can be mended. And, as McArdle is willing to admit, often the very person floundering will be prone to write themselves off as unsalvageable.

How to Fix the Census’s Obamacare Errors

Can you cook the books by using more accurate statistics?

That’s the question hanging over the Obama administration, now that the Census bureau has decided to change the way it assesses the number of Americans without insurance in the middle of the Obamacare rollout.

The basic problem the Census has been struggling with is how, exactly, to define “Americans without insurance.” If you ask your survey respondents “Do you currently have health insurance?” the percentage answering “No” will be a lot lower than the number of people who would say “No” to “Have you been uninsured at any point in the last year?” If you change your question to “Were you uninsured forall of last year?” the “Nos” will plunge accordingly. 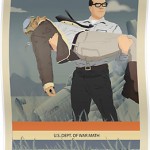 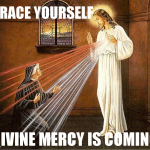 April 27, 2014 The Blessings of Asked For Mercy
Recent Comments
0 | Leave a Comment
"Oh! And you can get there via Naval Gazing.(probably not by Navel Gazing...)"
TheSparksFlyUpward Too Sucky To Be True
"Hello, Deiseach!1. This is not an ad. (It always reassures me when someone says that!! ..."
TheSparksFlyUpward Too Sucky To Be True
""Do you honestly think that a child raised by a woman has no exposure to ..."
Zorin 2012 Queer Blogathon [Index Post]
"I'd love to see a video of how it works. keranique shampoo reviews"
Marlene Garza Welcome Camels with Hammers to Patheos!
Browse Our Archives
get the latest from
Catholic
Sign up for our newsletter
POPULAR AT PATHEOS Catholic
1