I know we’re all done with Halloween, but I wanted to share these delightful, historical costumes with you all.  I love the “Radio Queen” one (which reminds me of the set direction in Rocky Horror), but my favorite has to be this plane. 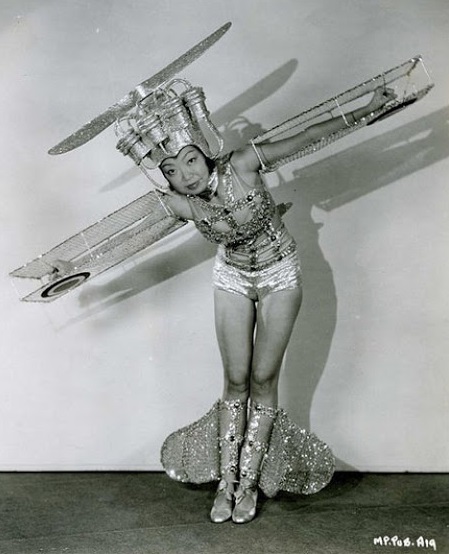 You could plan to do a less naked one next year, if it suits your fancy!  Halloween is less than twelve months away!

I love clever construction, whether physical or methodological.  And, speaking of the latter category, the NYT had a fun thing on how scientists try to estimate the number of rats in the world’s greatest city.  Including an explanations of how they don’t do the count:

He faced other methodological problems. He could not capture a large number of rats, mark them for identification purposes, release them, capture a second batch and count the number of marked rats in that batch. “Unfortunately,” he wrote, the health department “is unlikely to approve a large-scale rat-releasing experiment (I know, because I asked).”

Of course, rats and other vermin (pigeons have always been known in my family as “rats with wings”) have their uses.  A thief in Venice has worked out how to make good use of them:

When he got to the window he’d spotted from the San Marco bell tower, it was locked, as expected. But the wooden frame was old, rotted in places, and gave easily. On some jobs he brought a pigeon with him, which he would release inside the house to determine if there were motion detectors. This time, he was close to busy Campo San Barnaba. If an alarm went off, he figured he could just run out the back door and disappear into a crowd.

This was merely the shortest interesting thing I could excerpt from this story, I strongly recommend reading the whole thing.  A mafioso tries to steal a relic as a hostage in this story.

The thief in the story is trying to steal a piece of art, but he might have faced additional complications if he’d been trying to rob the Mariners’ Museum in Newport News, Virginia.  They’re mounting an exhibit of the works of James E. Butterworth.

The museum also got ahold of a forgery.  On purpose.

On entering the exhibition, visitors approach a high-resolution digital image of “Magic and Gracie off Castle Garden,” an 1871 Butterworth that shows two yachts, sails taut in the wind, racing neck and neck in New York Harbor. On a nearby television screen, a photo of Buttersworth pops up, and “hot spots,” activated with the touch of a finger, explain the fine points: the signature, size, background features, sky and weather, seas and sea gulls, composition and meticulous detailing of the ships.

Visitors, prompted by clues in the wall texts, then try to identify the lone forgery. At two voting booths, they can test their suspicions by entering the number of the suspected forgery on touch screens that tell them whether they are right or wrong and offer to give them the correct answer. Then the honor system applies. Those in the know are asked not to give away the secret.

If I lived closer, I’d love to visit that show.  The whole thing reminds me a little of a documentary I recently saw: Art and Craft, about a serial art forger who donated his fraudulent works to museums for the pleasure of seeing them exhibited, rather than any financial gain.  Here’s the trailer.

I’m really glad I saw it, though it turned out to be sadder and somberer than I expected.

If you’ve got a sickening feeling like someone bait-and-switched you, you might have been visited by that prolific art forger, or you might be locked in an argument with someone using the motte-and-bailey trick.  Scott of Slate Star Codex has written it up here:

The original Shackel paper is intended as a critique of post-modernism. Post-modernists sometimes say things like “reality is socially constructed”, and there’s an uncontroversially correct meaning there. We don’t experience the world directly, but through the categories and prejudices implicit to our society; for example, I might view a certain shade of bluish-green as blue, and someone raised in a different culture might view it as green. Okay.

Then post-modernists go on to say that if someone in a different culture thinks that the sun is light glinting off the horns of the Sky Ox, that’s just as real as our own culture’s theory that the sun is a mass of incandescent gas a great big nuclear furnace. If you challenge them, they’ll say that you’re denying reality is socially constructed, which means you’re clearly very naive and think you have perfect objectivity and the senses perceive reality directly.

The writers of the paper compare this to a form of medieval castle, where there would be a field of desirable and economically productive land called a bailey, and a big ugly tower in the middle called the motte. If you were a medieval lord, you would do most of your economic activity in the bailey and get rich. If an enemy approached, you would retreat to the motte and rain down arrows on the enemy until they gave up and went away. Then you would go back to the bailey, which is the place you wanted to be all along.

I’ll mention, as a cautionary note, that I think I run into people accusing others of motte-and-baileying them more often than I run into people actually using this trick to win an argument.  It’s pretty common, in conversations I’ve seen, for an interlocutor to expect you to defend other statements made by people “on your team” and to accuse you of wussing out when you point out that, no, you don’t believe what the last democrat/Catholic/transhumanist they met thinks, and you’re not sneakily giving them the runaround.

I’ve had plenty of conversations of the type of, “Well, if you don’t endorse everything Andrea Dworkin ever said, why don’t you show a little intellectual honesty, get out of the bailey, and stop calling yourself a feminist?”  This strikes me as silly, in that the edges/creeds of a lot of groups are blurry, and it’s not worth derailing a conversation about what your friend believes and why with a big drag-out fight about which litmus tests should be applied to which ideological labels.  So, use with caution.

Finally, while you’re working on logical thinking, try this puzzle from Cowbirds in Love.  The answer is at the link.

And, if you recognize this puzzle, you should still click through — it ends a little differently than you may remember.

November 10, 2014 Standing Naked Before God [Pope Francis Bookclub]
Recent Comments
0 | Leave a Comment
"I'd love to see a video of how it works. keranique shampoo reviews"
Marlene Garza Welcome Camels with Hammers to Patheos!
"Logismoi (the plural of logismos) are a fairly simple concept; they are whispers from either ..."
Rob, Portland Logismoi, Vampires, and Other Intrusive Thoughts
"I imagine I’ll do a lot more reading and pick a lot more fights over ..."
Donalbain A little about the queer stuff
"You are part of a search and rescue for lost Catholics.Regular updates to the countdown ..."
Edward Palamar I’m keynoting at a Con for ..."
Browse Our Archives
Follow Us!