Today is Ash Wednesday, the beginning of Lent — the season of preparation for Easter.  The whole church fasts from meat on Fridays, during this season, and individual Catholics usually make personal commitments to give something up or take something on as a discipline this season.

In Lent and in any other time, I sometimes like to review what suggestion other people make to me that I most frequently ignore, and, thus, this Lent seems like a good time for me to take a look at contemplative prayer.

I tend to engage in active and scripted prayers — saying the Divine Office on my way to and from work, going through the structure of an examen, etc — and I can recognize myself as living mostly on one side of St. John of the Cross’s description of the difference between meditation (more deliberately reflective) and contemplation:

I don’t like being at rest.  When I read Tamora Pierce’s Circle of Magic books, I had an enormous sense of relief when I got up to Cold Fire.   Up until that point, all the mages in the series had learned to control their magic through quiet meditation, sitting and counting their breaths.  I could maybe have the patience to do this, if the payoff was being able to do magic, but, luckily, in Cold Fire one of the students gets to learn proper focus a different way: quarterstaff fighting.  That sounded completely up my alley. 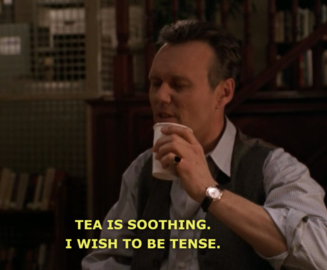 Secular meditation and religious contemplation tends to make me feel precisely the same way that sitting around after finishing a Regents exam, waiting to be allowed to leave, did: penned up and frustrated.

So I’m not trying anything very exciting in the way of contemplation for Lent.  I’m just setting a five minute timer, once a day (I’ve already done today’s) during which I’ll try to engage in contemplative prayer and patience.

It’s a short enough span that I won’t have to spend the whole time wondering whether I can do what I promised and it lets me give God my widow’s mite of patience, while I wait to see what could come of it.  Ora pro me.

Meanwhile, here on the blog, my usual comment policy has been to allow anything that’s not spam to be posted, but to pop into what look like bad threads to remind everyone involved that it’s ok to walk away from a fight.

Recently, I’ve felt the need to do that more often, as I’ve spotted back and forths where people are choosing to engage again with stubborn commenters with unusual and inflammatory opinions, without doing anything differently from the last n times people chose to pick this fight, or a discussion that becomes a series of complaints about the other person engaging in bad faith or being predictably dumb (once you conclude that’s the case, it’s a better use of your time to do anything else rather than keep arguing with someone you think isn’t listening).

So, during Lent, I’m going to be moderating comments a little more actively, in the hopes of freeing us all from finding ourselves in the position of Screwtape’s patient:

You can make him waste his time not only in conversation he enjoys with people whom he likes, but also in conversations with those he cares nothing about, on subjects that bore him. You can make him do nothing at all for long periods. You can keep him up late at night, not roistering, but staring at a dead fire in a cold room. All the healthy and outgoing activities which we want him to avoid can be inhibited and nothing given in return, so that at last he may say…’I now see that I spent most my life doing in doing neither what I ought nor what I liked.

Finally, if you’re looking to choose a lenten discipline of your own, Simcha Fischer has one of the best guides I’ve seen this season, because she breaks common disciplines out by purpose (e.g. “Lent as an opportunity to give up something you shouldn’t be doing anyway” “Lent as reset button” etc) which is a nice way to avoid defaulting to something like “Give up sweets/facebook/etc” simply because you know other people do it, without thinking about how it shapes your character.

February 17, 2015
No Villains, Just Inept Lovers in The Last 5 Years
Next Post

February 19, 2015 Asking a Lover for Too-Limited Support
Recent Comments
0 | Leave a Comment
"Back to Square 1 ... ¯\_(ツ)_/¯Season 3!G.657BW.CO/d5573Y"
Bobby Klein My Good Catch Catches Them All
"We all are meme thiefes here 😂🙃fM.9226B.US/fA5573BU"
VanguardAI Books on deck for me for ..."
"To understand an art, you must understand phynomena."
Unlcuky13 I’m speaking about my conversion in ..."
"Despite the differences in level, it's still an excellent manga.pt.2632W.US/U5573xM"
Pilzkeks Dissecting the Catholic Vote for FiveThirtyEight
Browse Our Archives
Related posts from Unequally Yoked