7QT: Good books, fake books, and the best job in the world

The LIGO team includes a small group of people whose job is to create blind injections—bogus evidence of a gravitational wave—as a way of keeping the scientists on their toes. Although everyone knew who the four people in that group were, “we didn’t know what, when, or whether,” Gabriela González, the collaboration’s spokeswoman, said. During Initial LIGO’s final run, in 2010, the detectors picked up what appeared to be a strong signal. The scientists analyzed it intensively for six months, concluding that it was a gravitational wave from somewhere in the constellation of Canis Major. Just before they submitted their results for publication, however, they learned that the signal was a fake.

Among the hardest sub-collections to assemble, Ms. Dubansky said, was a case of corny gag books. These include a 1941 anti-baldness volume called “How to Save Your Hair” (inside: a plastic bag in which to place the strands that had fallen out) and several “exploding books” made by the novelty company S. S. Adams, better known for the whoopee cushion and joy buzzer.

To celebrate World Book Day last April 23rd, L&PM gave away 10,000 books for free at subway stations across Sao Paulo. Each book came with ten free trips. When all ten trips have been used up, users can recharge them via the Ticket Books website and use them again or gift them to a friend to encourage even more people to read. The project was so successful that L&PM expanded the project to other cities in Brazil.

And while you’re looking for books that will transport you, I did recommend Anecdotal Shakespeare as one of the best books I read last year. I read Alexi Sargeant’s copy, and had to wait for him to loan it to me until he was finished reviewing it for First Things.  His review just came out from behind the paywall this week.

What he’s set out to do in his Anecdotal Shakespeare: A New Performance History is not simply catalogue these scurrilous or whimsical bits and bobs of backstage gossip. Instead, Menzer’s subtitle proclaims his hope that he can compose A New Performance History out of this “fugitive chronicle of exploding wigs, loutish drinking, petty rivalries, and priceless put-downs.” For Menzer, the anecdote is a subtle breed of theater criticism, a way for actors to say what plays come close to but never quite say about themselves. Tales of casting actors who, as a couple, would be incestuous make Romeo and Juliet as shocking to us as they’d be to the Montagues and Capulets; stories of ghosts that are too, too solid give us a humorous version of Hamlet’s disgust with the flesh.

In a different act of artifice, I really enjoyed Vox’s explainer on how the virtual yellow line is drawn for football matches.

(The video refuses to embed, so you’ll need to click through).

I really don’t like football (due to concussion risk) but I always like weird stories on how the rules for sports are made, so I did like the NYT piece on how hard it apparently is to define a catch in football.

When Oakland’s Michael Crabtree caught a pass along the sideline this season, he landed with both feet in bounds, was shoved from behind, tucked the ball under an arm, stumbled several steps out of bounds — doing everything but taking out cheerleaders and water jugs along the way — and lost control of the ball once he put his hands on the ground to break his fall.

By the “100 drunks in a bar” standard promoted by the football commentator Mike Florio, it was a catch. By the N.F.L.’s standard, it was not.

Finally, if you’re looking to test (and possibly strengthen) your relationship for Valentine’s Day, you may want to head to Ikea.

In therapy, so many couples mention fighting while shopping at IKEA or while assembling what they buy there that clinical psychologist Ramani Durvasula has started embracing the retailer as a tool for a communications exercise. The Santa Monica, Calif., therapist often tasks couples with putting together a large piece of furniture at home and reporting back on how it went. 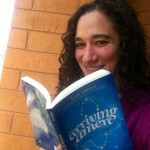 February 11, 2016
Speaking in Rhode Island tonight & how to have me visit your school
Next Post

February 13, 2016 My Statistician's Guide to Valentine's Day
Recent Comments
0 | Leave a Comment
"Jesus wasn’t resurrected as a great miracle simply in order to convince people to believe ..."
John The Two-Lazarus Problem
"The cartoon is amusing, but flawed. One of the four virtues of Stoicism is Justice; ..."
Vulpes Inculta 7QT: Stoicism Man, Semi-Imaginary Money, and ..."
"Do You Know what isn't Fair? Calling Atheism a Religion. Or saying Dawkins is a ..."
skwills Who Gets to Give the Courtier’s ..."
"Oh! And you can get there via Naval Gazing.(probably not by Navel Gazing...)"
TheSparksFlyUpward Too Sucky To Be True
Browse Our Archives
get the latest from
Catholic
Sign up for our newsletter
POPULAR AT PATHEOS Catholic
1