It’s been a week since Ash Wednesday and the beginning of Lent, and, if you notice you’re having a little trouble remembering that it’s Lent (aside from the different colors at church), you might want to take a look through Eve Tushnet’s Lent A-Z to see if any of her thoughts are fruitful for you.  Here are two of her comments that I particularly liked:

R is for Ridiculous. Sometimes Lent makes you look ridiculous. That’s wholesome. Or you feel ridiculous because you can’t even give up some trivial thing like chocolate for six days out of the week. Laughing at your ridiculousness is a vastly better way to respond to these failures than, like, wallowing in self-recrimination.

S is for Solidarity, but also Skepticism. Melinda makes the point that our Lenten sacrifices can help us stand in solidarity with those who lack what we’ve voluntarily renounced. I… I think this works sometimes, and her post on home is truly powerful. But I am skeptical of how often a chosen sacrifice, especially a sacrifice with a safety net under it, helps us understand the situation of people whose sacrifices are unchosen and inescapable. No matter what I give up it would be very hard for me to experience the helplessness and fear I see in e.g. the poorest clients at the pregnancy center, since my friends and family would be nearby ready to help me if I needed it. IDK, perhaps that realization in itself is part of the point–how can I serve in a way that eases isolation as well as material need?

Meanwhile, for me, one thing that does turn out to be helpful to me about giving up jaywalking is just that it keeps coming up!  If I had given up a certain kind of food, I wouldn’t be reminded that it’s Lent very often (I tend to cook in batches, so any restriction would only be relevant when I do the shopping and cook the whole thing once.  After that, it’s just a matter of eating what I’ve already made, without a pause for thought or prayer).

I like that giving up jaywalking interrupts me frequently — reminding me that it’s Lent, poking me to think about what else I’ve done, good or bad.  It’s the equivalent of a string tied round your finger or a hair shirt on your back, something to jar you and get your attention back on praying without ceasing. After all, it’s hardest to remember something you’re supposed to do all the time, and can’t just relegate to an appointment or a task to check off.

If you’ve run into any troubles in your Lent (or not run into troubles, because you’re barely running into Lent) it might be worth asking if there’s a discipline you can take on that, harder or easier, will at least let Lent intrude into your life a little more often, and offer you more chances to get caught up into it. 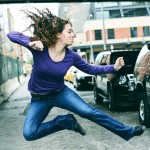 February 18, 2016 Letting Go of the Goal of a Hardcore Lent
Recent Comments
0 | Leave a Comment
"On that note... I recommend every Catholic and Christian have that post a read. Click ..."
Oktavian Zamoyski Effective Altruism and Caritas [Radio Readings]
"I think too many people have grandiose and unnatural ideas about charity. It becomes a ..."
Oktavian Zamoyski Effective Altruism and Caritas [Radio Readings]
"Jesus wasn’t resurrected as a great miracle simply in order to convince people to believe ..."
John The Two-Lazarus Problem
"The cartoon is amusing, but flawed. One of the four virtues of Stoicism is Justice; ..."
Vulpes Inculta 7QT: Stoicism Man, Semi-Imaginary Money, and ..."
Browse Our Archives
Related posts from Unequally Yoked