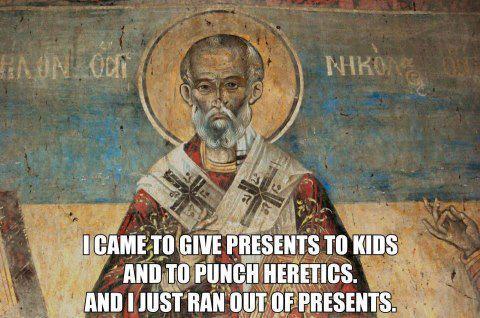 Every Christmas we’re treated to a slew of articles and blog posts and books about the “real” Santa Claus. We love to try to get behind the modern, secular, commercial mythology and discover the “true” Christian foundation of Jolly Old Saint Nick.

The most popular modern story about the historical Saint Nicholas places him as the 4th-century Bishop of Myra. Due to that position, he was called upon to be part of the First Council of Nicaea in 325 AD and it was at that council that Nicholas, in passionate opposition to Arius’ understanding of Jesus as being subordinate to God, came over to Arius and slapped him in the face, thus causing an almost inconceivable breach of decorum.

So we have a neat Christmas story about the real Santa Claus being a staunch defender of Christian orthodoxy — and what’s more Christian than eschewing commercialism and embracing dogmatism?

But here’s the problem: that story about St. Nick is decidedly uncertain. It seems likely that there was a Nicholas who was Bishop of Myra in the 4th century. But the earliest records from Nicaea don’t list him in attendance. Those records are incomplete, so he may have been there — but we don’t have good evidence proving he was there. And, more importantly, we have no first-hand account of the Arius-slapping event. That colorful confrontation doesn’t crop up as part of Saint Nicholas’ biography until hundreds of years later, and then it’s mixed in with many other extraordinary events that we’re certain didn’t happen.

Given the paucity of reliable historical information about the life of Saint Nicholas, it seems wise to withhold rendering judgment on the matter. If Snopes were to investigate the story of Saint Nicholas slapping Arius they’d have to categorize it as “undetermined.”

Unfortunately, most modern “historical” accounts of the life of Saint Nicholas generally offer no citations of primary sources and scant citations of any sources at all. Rather, this alternate mythology surrounding Nicholas is passed on as straightforward “fact” with virtually no historical evidence.

It’s good to seek out the truth behind our myths, but we should guard against simply supplanting one myth with another, valuing its supposed truth merely because it accords better with our pre-existing beliefs. Like it or not, we have more evidence that a modern Santa Claus delivers gifts through chimneys than that Saint Nicholas slapped Arius at the First Council of Nicaea.

December 18, 2013
A love "bigger than two": one polyamorous relationship
Next Post

A spy in the house of...
slacktivist
Related posts from Unfundamentalist Christians