The murder of James Foley, ISIS, and Religions of Peace

The murder of James Foley, ISIS, and Religions of Peace August 20, 2014 Dan Wilkinson 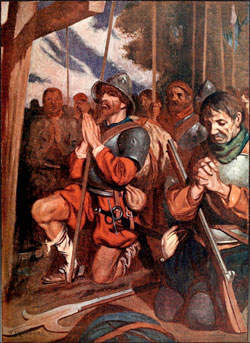 While discussing the news of the murder of journalist James Foley at the hands of ISIS, a friend of mine posed to me the question: “What does it say about your religion when you have to kill people who won’t convert?”

Before we conflate the extremism of ISIS with the entire religion of Islam, let’s keep in mind the checkered history of Christianity.

In The Devastation of the Indies: A Brief Account, the sixteenth century Spanish historian and priest Bartolomé de Las Casas describes the genocide inflicted by the Christian conquistadors upon the native peoples of Haiti and Cuba (warning, descriptions of graphic violence):

And the Christians, with their horses and swords and pikes began to carry out massacres and strange cruelties against them. They attacked the towns and spared neither the children nor the aged nor pregnant women nor women in childbed, not only stabbing them and dismembering them but cutting them to pieces as if dealing with sheep in the slaughter house. They laid bets as to who, with one stroke of the sword, could split a man in two or could cut off his head or spill out his entrails with a single stroke of the pike. They took infants from their mothers’ breasts, snatching them by the legs and pitching them headfirst against the crags or snatched them by the arms and threw them into the rivers, roaring with laughter and saying as the babies fell into the water, “Boil there, you offspring of the devil!” Other infants they put to the sword along with their mothers and anyone else who happened to be nearby. They made some low wide gallows on which the hanged victim’s feet almost touched the ground, stringing up their victims in lots of thirteen, in memory of Our Redeemer and His twelve Apostles, then set burning wood at their feet and thus burned them alive.

Amidst these atrocities, a tribal chief (cacique) named Hatuey was captured by the Franciscans and presented with this offer:

When tied to the stake, the cacique Hatuey was told by a Franciscan friar who was present, an artless rascal, something about the God of the Christians and of the articles of the Faith. And he was told what he could do in the brief time that remained to him, in order to be saved and go to Heaven. The cacique, who had never heard any of this before, and was told he would go to Inferno where, if he did not adopt the Christian Faith, he would suffer eternal torment, asked the Franciscan friar if Christians all went to Heaven. When told that they did he said he would prefer to go to Hell. Such is the fame and honor that God and our Faith have earned through the Christians who have gone out to the Indies.

Most Christians would claim that these acts done in the name of Christianity have nothing to do with the faith they know and practice. And the same is true of most Muslims, who have spoken out loudly and repeatedly against ISIS:

Christians, Muslims, and people of all faiths should rightly mourn the death of Foley, as we mourn the loss of every life at the hands of hatred. But we must never allow the actions of a few to hijack the message of peace and love that lies at heart of our faiths. No belief system is immune from evil; we all have planks in our eyes.

Despite the disheartening message that extremism seeks to perpetuate, we each must continue to strive to be known, through our words and actions, as true representatives of religions of peace.

Indeed, Allah enjoins justice, and the doing of good to others; and giving like kindred; and forbids indecency, and manifest evil, and wrongful transgression. He admonished you that you may take heed. (Al Quran 16:91)

And now faith, hope, and love abide, these three; and the greatest of these is love. (1 Corinthians 13:13) 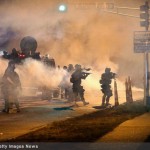 August 27, 2014 Dr. Albert Mohler versus musician Michael Gungor: Who is on the verge of theological peril?
Recent Comments
0 | Leave a Comment
"6 Bible results for "be kind":2 Chronicles 10:7They replied, “If you will be kind to ..."
Jim E Jones Seven ways Christians blow it
"Uh...no?"
Tiny J Seven ways Christians blow it
"GOd came to save us from eternal separation from God by dying on a cross?Do ..."
Bones Did Jesus speak more about Hell ..."
"Eternal separation from God"
SPH Did Jesus speak more about Hell ..."
Browse Our Archives
get the latest from
Progressive Christian
Sign up for our newsletter
POPULAR AT PATHEOS Progressive Christian
1

May the circles be unbroken
slacktivist
Related posts from Unfundamentalist Christians