The Quest for the Historical Jesus: Part Four 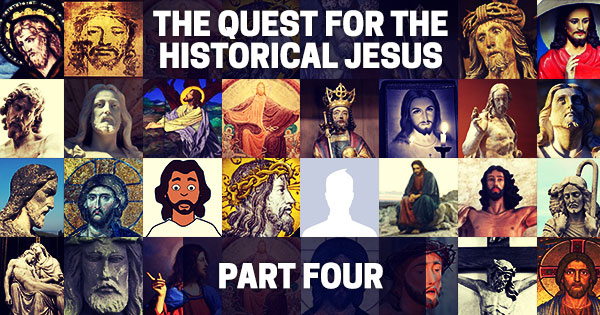 The term “Kingdom of God” and its related form in the Gospel of Matthew, “Kingdom of Heaven,” are at the very center of Jesus’s entire message. New Testament scholar John Reumann wrote: “Ask any hundred New Testament scholars around the world, Protestant, Catholic, or non-Christian, what the central message of Jesus was, and the vast majority of them – perhaps every single expert – would agree that his message centered in the kingdom of God.”

There are differing interpretations of what exactly this Kingdom looks like, but far more controversial is the method of the Kingdom – how and when it will arrive. This is where scholars are divided: at the eschatological views of Jesus.

Eschatology is theology regarding the end of the world. The traditional Christian view is that the world as we know it will end with the second coming of Jesus as told in Revelation. But Revelation was written many years after Jesus’s death. What were his own views?

The traditional model is commonly called “apocalyptic” or “imminent” eschatology. It was codified by Albert Schweitzer and remained the dominant view throughout the 20th century. The dissenting view is called “realized” or “participatory” eschatology, and was first developed by C.H. Dodd; it has found support mostly among more liberal scholars.

Before we discuss these two views of the Kingdom, it’s important to note one strong agreement between the two camps: the Kingdom Jesus spoke of was not about an afterlife, but about a transformed Earth. Consider the Lord’s prayer, found in both a short form in Luke and a longer, more familiar form in Matthew, thus making it from Q (this expansion of the prayer in Matthew, by the way, is an example of one reason most New Testament scholars accept the two-source theory that I discussed in part two of this series).

I won’t reproduce the entire text from Matthew 6:9-13, but Matthew 6:10 is particularly helpful regarding our understanding of the Kingdom: “Your Kingdom come, your will be done, on Earth as it is in Heaven.”

The Lord’s Prayer is thought by most scholars to be an authentic teaching of Jesus, if not in its exact wording, then certainly in its message. Because of this, we can conclude that Jesus believe that the Kingdom of God was a kingdom for the Earth.

But we are still left with the question of how exactly this Kingdom was to manifest itself.

Apocalyptic eschatology means that God will intervene to bring His Kingdom to Earth, replacing the way of life of man (or of Rome) with his own. This is a familiar Messianic expectation: the appearance of God’s Messiah would be the catalyst to the coming of the Kingdom. Naturally, many of Jesus’s followers thought that he himself was the Messiah, and after his death postulated that he would soon be returning to finish the job he’d started.

This view is supported by the letters of Paul, who was sure that Jesus would return in his lifetime. John the Baptist also had an eschatological message, urging Jews to repent in time for the Kingdom to arrive. Remember that Jesus most likely began as a disciple of John; since both Jesus’s teacher and many of his successors believed in the imminent arrival of the Kingdom, it follows that he probably did as well.

Many Christians are uncomfortable with perspective, because it obviously means that Jesus was wrong, or at the very least, that most of his followers were. Various theological arguments have been employed to rectify this seeming error, but historically speaking, if Jesus believed that the Kingdom was imminent, he was wrong.

The alternative viewpoint, realized eschatology, is somewhat of a misnomer because it is not truly eschatological. Subscribers believe Jesus taught that the Kingdom of God was in some way present in his own ministry and deeds; that is, already on Earth and accessible to anyone who followed his way.

Geza Vermes argues powerfully in Jesus the Jew that none of the apocalyptic “Son of Man” sayings attributed to Jesus in the gospels can be reliably traced back to him, which would decisively undermine the argument for apocalyptic eschatology. Marcus Borg concurred in his essay A Temperate Case for a Non-Eschatological Jesus, citing several scholars who hold this position. Borg’s friend John Dominic Crossan has been considerably vocal in support of the non-eschatological view as well, and recently Reza Aslan’s Zealot made a similar case.

Though the apocalyptic position has merit, I personally find the non-eschatological model of Jesus more convincing. Both views have their strengths and weaknesses, and it is disagreements like this one that continue to make scholarship on the Historical Jesus so compelling.

In my final post in this series, I’ll offer some thoughts about the personal importance of the Quest for the Historical Jesus…

February 10, 2016
Preemptive Forgiveness (The first saying from the cross)
Next Post 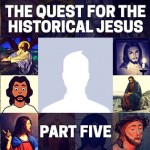 February 12, 2016 The Quest for the Historical Jesus: Part Five
Recent Comments
0 | Leave a Comment
"6 Bible results for "be kind":2 Chronicles 10:7They replied, “If you will be kind to ..."
Jim E Jones Seven ways Christians blow it
"Uh...no?"
Tiny J Seven ways Christians blow it
"GOd came to save us from eternal separation from God by dying on a cross?Do ..."
Bones Did Jesus speak more about Hell ..."
"Eternal separation from God"
SPH Did Jesus speak more about Hell ..."
Browse Our Archives
get the latest from
Progressive Christian
Sign up for our newsletter
POPULAR AT PATHEOS Progressive Christian
1

Milestones
Each generation has ways to mark time. Marking time, like marking distances,...
view all Progressive Christian blogs
What Are Your Thoughts?leave a comment
Copyright 2008-2021, Patheos. All rights reserved.