The Lord accepted Abel and his gift. But he did not accept Cain and his offering. Cain was sad because of this, and he became very angry. The Lord asked Cain, “Why are you angry? Why does your face look sad? You know that if you do what is right, I will accept you. But if you don’t, sin is ready to attack you. That sin will want to control you, but you must control it.” Cain said to his brother Abel, “Let’s go out to the field.” So they went to the field. Then Cain attacked his brother Abel and killed him. Later, the Lord said to Cain, “Where is your brother Abel?” Cain answered, “I don’t know. Is it my job to watch over my brother?”

Growing up in a conservative evangelical home, I encountered stories of violence against children in the Bible with little to no context. Twice I read the entire Bible from Genesis through Revelations all on my own. I also participated in the Bible verse memorization club AWANA, memorizing a slew of verses simply to win prizes like plastic jewels and candy. Like many other children I knew, I was not encouraged to use these violent stories to equip, protect, and liberate myself as a child.

To this end, I present the following examples of how caretakers and teachers can do this:

The Story of Cain and Abel, For Young Children

The very first story of children in the Bible is a story of child abuse. Specifically, it is a story of sibling abuse. Cain kills his younger brother Abel because Cain is jealous that God likes Abel’s sacrifice more than Cain’s. I do not think this is a coincidence. I think that child abuse is a pervasive reality and this story highlights this reality for important reasons.

The story demonstrates the vulnerability of children, especially younger children. It points to the failure of the archetypal parents, Adam and Eve, to protect their child against a predator. It also points to the fact that those who threaten children are not usually strangers but people close to the victim’s family — in this case, the victim’s very own sibling. It also illuminates the violence that can occur when parents neglect their children, as Adam and Eve are entirely absent from the story apart from their act of sexual procreation. The parents’ absence causes them to miss the potential signs of abuse.

The story of Cain and Abel can be a launching point for talking to children about the importance of expressing anger in non-violent ways. After presenting the story to the children in your care, ask the children: “Have you ever been really mad at someone, like Cain was mad at Abel?” When the children say yes, ask them, “Were you ever so mad at the person that you wanted to hit them?”

Before you move on, stop and make sure that you really hear what the children say about their anger or other feelings. Make sure, too, that the children feel heard. As you engage them, sit or kneel so you are on the same level with them. Nod your head or use other body language to communicate you are listening, not just waiting to get on with the lesson. Listen with your whole body.

After the children have spoken, let them know that anger is itself ok. It is an emotion and emotions aren’t bad; they just are. God made us in God’s own image. In the Bible, God shows all sorts of emotions: joy, sadness, jealousy, and yes, even anger. We’re made in God’s image — that’s why we feel such big feelings!

At the same time, sometimes our emotions get so big that we do things we shouldn’t — like hit someone when we’re angry. The anger is ok, but the hitting isn’t. Use the children’s answers to now introduce Matthew 26:52, where Jesus tells Peter to lay down his sword. Point out to the children that Peter had a real big reason and right to be angry — Judas, one of his and Jesus’s best friends, betrayed Jesus. That was really mean of Judas. But Jesus tells Peter that using his sword to hurt other people wouldn’t be the right response.

Use Jesus’s example to ask the children, “How can you express your anger to the person who made you mad in a way like Jesus? What are ways to be angry without hitting?” If the children are up for it, you can even role-play. Have one of the children who shared their story of anger come up to the front and interact with another child who is playing the person the first child was/is mad at. Have the first child practice different ways of talking to the person who made them mad that do not involve violence.

You can also talk to the children about how sometimes even adults get angry and hit other adults and children. Explain that this, too, is wrong. Adults don’t get to hit people just because they’re adults. Tell the children that if they ever see an adult hit another adult or child, or if they get hit by a parent or sibling, they should tell an adult they trust: a teacher at school or a pastor or an adult relative. Everyone has the right to feel safe in their own bodies and no one deserves to be hit.

The Story of Tamar and Amnon, For Young Children

Children should be taught as early as possible about good touch and bad touch. Justin and Lindsey Holcomb’s book God Made All of Me is a great introduction to this topic and geared towards young children, teaching them important lessons like “You are in charge of your body” and “You can say no.” Children should regularly hear empowering messages like these. They should know that their bodies belong to themselves and they have the right to feel safe and secure in their bodies.

Tamar’s story provides a good place to start building on basic lessons about good and bad touch. Without going into graphic detail, children can be told that Amnon, Tamar’s brother, didn’t respect Tamar. He touched her in ways she didn’t want. When she told him to stop, he didn’t. This is wrong. If someone doesn’t want to be touched, even if it’s a quick hug, you need to respect that. And if someone touches you when you don’t want to be touched, you should say “No” firmly. Yell it if necessary. And always, always, always immediately tell an adult you trust about what happened. Having this conversation with children introduces them early to the importance of consent and body safety, a conversation that can be built upon during the children’s entire lives.

The Story of Tamar and Amnon, For Older Children

We are told in 2 Samuel 13 that Tamar was “beautiful,” so beautiful that Amnon was “ill” with desire for her. This is a good starting place for talking to older children like teenagers about the finer details of consent. Teenagers should already have a basic understanding of sexuality and the importance of respecting other people’s bodies. When they read that Amnon raped Tamar, they should know what that means and that it is wrong. They should know that if they are ever assaulted or if they know of a friend who is assaulted, they should report it to trusted adults and the authorities immediately.

A resounding “No” should be the answer to all of these questions. However, it is likely that the teens in your care might have said “Yes” to some of the questions or might have been unsure as to how to answer. In those cases, talk about how no one has the right to have sex with someone without their conscious, enthusiastic, informed, and immediate consent; otherwise it is rape.

There is also the obviously problematic issue of incest. While you might assume you do not need to mention that to teenagers, it is worth it — at the very least — to use Tamar’s story to inform older children that sexual abuse is most often perpetrated by people close to the victims. Encourage them to tell a trusted adult in their life if they are experiencing abuse.

The above are merely three examples of how stories about violence against children in the Bible can be used to equip, protect, and liberate children from future violence. Instead of being afraid of or avoiding these violent stories, Christians should bravely face them head-on. In your own faith community, school, and/or home, start thinking creatively about how these and other violent stories can become launching points for important and necessary conversations about liberating children in our midst from oppression and abuse. 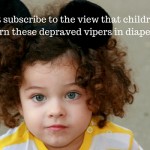 March 22, 2016
Parenting in the midst of faith wandering
Next Post 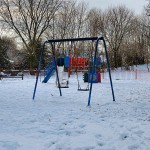 March 29, 2016 Social Justice: For the Sake of the Children
Recent Comments
8 Comments | Leave a Comment
"TW child abuse as someone who grew up in fundamentalist Christian spaces, I'm pretty sure ..."
Fiver Connolly No, John Piper, Kids Do Not ..."
"I will rather teach my kids not to read materials like this"
None Why Your Children do NOT Need ..."
"*by"
Eli C The Trouble with Easter: How To ..."
"Hey real quick, do you mind explaining to me how we could possibly be saved ..."
Eli C The Trouble with Easter: How To ..."
Browse Our Archives
Related posts from Unfundamentalist Parenting