I came across this CNN article on 9 Myths of Hinduism Debunked.

It’s a good concept. I like the article. Yet there’s something about it that’s needling at me. It definitely sounds like the perspective of an American Hindu. Someone who wants to reassure whitebread neighbors that Hinduism isn’t that different from their lifestyle. We don’t really believe in lots of Gods. We’re not bowing down to cows. Really. We’re not that strange!

And yet, does Hinduism need to be sanitized and made safe? Does it need to justify itself to American waspyness (White, Anglo-Saxon, Protestant)?

Hinduism is many things.

Often it doesn’t make you feel safe, it makes you feel a lot of emotions. There are loud sounds, bright colors, intense smells.

Some of these “myths” are only myths to some branches of Hinduism and are true in other branches of Hinduism.  Many of the myths the author is right in debunking as either untrue or too simplistic. The author is quite correct in saying that not all Hindus are vegetarian and the Bhagavad Gita is not the same as a Bible. Others, though, make me wonder why we’re acting like they would be bad things.

Does it feel wrong because your Christian or Jewish neighbors are shocked by it? Do you feel like you have  reassure them that we’re not really worshiping idols? Why? Hinduism doesn’t need to make others feel safe.

I suspect that this is a matter of fitting in. You don’t want to feel like a freak and an outsider because your traditional practices are so different from anything a white Christian American has ever experienced.

But I would be wary of sanitizing Hinduism for their consumption.

One of the greatest things about Hinduism is its intensity, the way it can’t be contained. At times it is shocking or confusing. It can be well ordered and it can be a riot. It can be a silent prayer or a man holding his arm above his head for twelve years. It can be a man meditating queitly in the forest or a Goddess in a graveyard dancing on bones with blood pouring from her mouth.

To me I think Hinduism forces you to take on contradiction and embrace life’s wild unpredictable nature. If we try to scrub it clean and make it look safe and normal and nice for average westerners, we lose a huge part of what makes Hinduism special. It does not have to cave to anyone’s expectations of it. It is larger than definition and containment. It doesn’t exist to make you feel safe. It simply is and you are along for the ride. 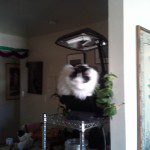 May 2, 2014 Smelling the Flowers
Recent Comments
7 Comments | Leave a Comment
Browse Our Archives
get the latest from
Hindu
Sign up for our newsletter
POPULAR AT PATHEOS Hindu
1