Racial Identity: me and Rachel Dolezal

I’ve been hearing about this situation with Rachel Dolezal for a few days and biding my time trying to understand my thoughts about it. She’s a woman who identifies as Black racially but has no known Black ancestry. When it came to light that this woman– who was a chapter president of NAACP– had White parents, debate and outrage and discussion ensued. It’s a discussion that really goes beyond this one woman’s behavior and highlights that racial identity is not as simple or clear cut as we like to think it is.

People are made up of thousands of years of breeding at this point and in America nearly all of us have a complex history of different races in our DNA. Once we even had a legal definition for Black: a single drop. In other words, if you had even one single Black ancestor no matter how far back or removed, you were classified as Black and had to take all the at-the-time legal disadvantages that entailed.

But for those of us with family in the U.S. for a long time, it’s hard to even know fully what our ancestry is. Nearly all Black Americans have a White ancestor or ancestors and many White Americans probably have Black ancestors too. Blackness is about a lot more than skin tone. If the test for Blackness is that you have to have a particular shade of skin tone, what of Albino Black people? If the test is that you have a certain amount of African ancestry then we’d have to go back through most of the Black history of America and re-classify things.

Racial identity has been complicated in this country for a long, long time.

It’s also interesting that in America we are beginning to accept the idea of trans-gender identity, that a person could be born the “wrong” gender and identify with another. It’s difficult for me to see how this “trans-racial” (need a different term to not be confused with adoption) identity is different. Nor trans-abled identities (people who identify as disabled when they are not). Right or wrong, is it different? (excellent essay on this topic here and an article about why they are different here, though it seems to me the lying is more about avoiding the media circus than being dishonest about your true identity). Who gets to decide who is authentic and who is not? Do people have the right to self-identify? If you’ve identified in a way different from your outward appearance since childhood is it more legitimate? Is it a matter of choice or a matter of gut feeling?

And wouldn’t anyone facing the enormity of coming out in any of these identities obscure the change if they could? Not to have to face the discrimination and questions and attention? If someone who grew up a boy could just start passing as a girl without having to explain and defend and get a spotlight on that transition, I’d expect that they would.

Because we believe in reincarnation I think it is easy to see how someone could identify with a different culture (or different anything) from a very young age. They could have very recently come from that racial or gender or ability or cultural experience.

Passing has become a more complex topic since I first heard of it in Passing by Nella Larsen. In that story a light-skinned woman of Black heritage passes for White and marries a White man without him knowing her ancestral history and her childhood in Harlem. Maintaining that when she is faced with a woman she grew up with becomes very challenging.

Perhaps there is still a desire for some to want to pass for White if they can, to try to gain the privilege and safety that comes with that.

Now I’m seeing it moving both ways. People in the privileged group wanting to pass for a minority. Maybe because there is some status in being an underdog, in being able to claim suffering and struggle. Maybe because of boredom with the life they were given. Maybe because they truly identify with the culture of this other race. (Reminds me also of Malibu’s Most Wanted, which may be a comedy but definitely speaks to these issues).

The thing that makes this such a hot-button issue, I think, is that people have to have a certain amount of privilege in order to declare an identity different from their background. Able-bodied people can “choose” disability but disabled people cannot choose able-bodiedness. White people can “choose” to try on other people’s cultures but darker skinned people cannot take on whiteness. The ability to identify only goes one way. (Great Daily Show clip here: “We need allies not replacements“)

This situation can’t help but make me turn inwards. I have had times of enormous temptation to identify as Indian, to lie about my heritage, to pretend to be Indian, to pass. I work hard to fight against that and to remember that I’m speaking on this blog not just as a Hindu but as a non-Indian Hindu. I cannot claim to know the experience of Indian Hindus or Hindus of Indian ancestry. I am sharing and discussing only my experience, which includes being White.

I was very interested to read Peter Mosley’s take on Rachel Dolezal. He is a fellow Patheos writer and a Black man. His post on the subject talks about how he was willing to listen to her side and give her the benefit of the doubt but points out how she has handled the attention badly. In her interviews rather than being humble she is claiming that she is some kind of expert on Blackness. That she is a go-to person for White people to learn about Black culture. And that is a problem.

I can see both sides of this. I too have had the experience of feeling like White people sometimes come to me with questions about Hinduism or about India because they feel more at ease with me. I am not okay with that. I try to answer by pointing them towards more authentic sources. But I can see how Ms. Dolezal saw in this an opportunity to do good, to try to help the community she identifies with.

One friend, another Black man, said when this first began that he didn’t have a problem with Rachel Dolezal if she was taking the bad with the good and not switching around how she identified when it was convenient. Given the later quotes that Mosley found where she talks about her advantages being light-skinned I think perhaps she was not taking the bad with the good. Or perhaps she was by the way she lived her life passing as Black rather than being obviously White in a Black culture.

But this is precisely what makes the Dolezal deception complicated. Artists like Eminem and Teena Marie, white people who were by and large accepted by black people as a legitimate part of black cultural life, nonetheless had to finesse a kind of epidermal conflict of interest. Irrespective of their sincerity, a portion of their profitability lay in their status as atypically white. Dolezal’s transracialism was imbued with exactly the opposite undertaking. She passed as black and set about shouldering the inglorious, frustrating parts of that identity—the parts that allocate responsibility for what was once called “uplifting the race.” It’s an aspect of her story that at least ought to give her critics—black ones, particularly—a moment of pause. –http://www.newyorker.com/news/daily-comment/rachel-dolezal-black-like-her

To me an important question is: did she look Black enough for White people to identify her as Black? If so then the Twitter outrage about how she doesn’t have to worry about the dangerous parts of being Black is not justified. It seems to me that she willingly put herself in a position to be discriminated against. It also doesn’t seem to me like Rachel Dolezal went out looking for fame. It happened to her while she was just living her life and aligning her activities and her life to what mattered to her.

She lied probably to make her life a little easier, to be able to fit in where her soul felt like it belonged. Or perhaps I am transferring my feelings onto her and making assumptions about her motivations. My own desire to pass is not a desire to stand out or be special. It is the opposite. It is a desire to blend in, to not stand out, to go about my business quietly and unremarkably.

I’d gladly give up my privilege permanently to fit in where it counts for me: in my faith community. There are those who will feel hurt and outraged by that statement, I think. Those who have been harmed by a lack of privilege and think that I don’t know what it is I’m offering to give up.

I just know that I’d take on any hardship if it meant unqualified acceptance in my faith.

I have my moments of veering in the direction of being misleading about my racial identity. It does happen no matter how strong I try to be against it. Yes, it makes me happy when someone tells me I look Indian in a picture, or when an Indian person asks me if I’m half Indian. Yes, I dress in Indian clothes even though that’s not a requirement for being Hindu. Yes, I watch Bollywood movies, eat (and cook) Indian food, and study Hindi even though none of these things is a requirement for being Hindu.

Again, in the end, this is about more than Ms. Dolezal herself. Maybe she did switch identities when it was useful to her. Maybe she did lie about more than just her background. Maybe she wanted attention or fame. Maybe she is not the right poster child for this question but the question remains. If a person strongly identifies as something other than what they appear to be based on their birth, should they be able to change their bodies and identity and presentation to the world to reflect that? 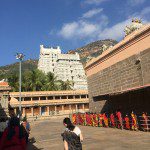