Patheos Explore the world's faith through different perspectives on religion and spirituality! Patheos has the views of the prevalent religions and spiritualities of the world.
Today I have a wonderful pep talk for you from Mahanth S. Joishy, the creator of the blog US-India Monitor (find him on Twitter at @usindiamonitor). I’m over at his blog for an interview as well!

I was glad when Ambaa graciously asked me to write a guest post about Hinduism and inclusiveness for the readers of this site.  I am one of those Hindus who believes quite forcefully that Hinduism should be a wide open, welcoming gateway for all those who live on this earth.  The religion and way of life are, at their very best moments, gifts meant for all of humanity to share and enjoy regardless of one’s ethnic, religious, or geographic background.  This belief comes from a very basic Hindu tenet many of us were taught as snotty-nosed children: that all minds are part of one single and massive mind or consciousness, that all are one and one are all.  All souls are part of one great soul.  We are all on this small round spaceship, speeding through the universe into whatever comes next, together.

One single mind is a mysterious concept and difficult even for most devout adult Hindus to mesh into the realities of life.  For too much of its history, practitioners of the world’s oldest existing major religion have engaged in chauvinism towards other religions that cropped up over time.  Arguably, an even worse stain on Hinduism’s record is the centuries-old caste system. This stratified Hindus into four distinct social stations, with clear winners and losers, layered on top of a fifth category of “untouchables” who were treated by those of higher castes as sub-human life forms. These community separations were considered iron-clad and often based on one’s birth instead of one’s merits and proclivities as castes were originally envisioned to embody in religious and political literature.

Despite those Hindus that would advocate for exclusion both within and outside the religion, there has always been a strong legacy of leaders in the flock who strove to be more inclusive.  Their influence has happily grown stronger over time, as the caste system is steadily losing its grip on Indians around the globe to make way for merit based pigeon-holing.  Now, it is medical doctors and scientists who sit atop the food chain of respect in Indian society both at home and abroad, and this respect has to be earned the hard way.

An interesting journey is taking place for Hinduism in the Western world.  Among those great Indians who brought Hindu culture to America and embodied that Hinduism is meant for all, are Swami Vivekananda, Paramhansa Yogananda, and Mahatma Gandhi, each in their own different way.

Gandhi is recognized as one of the spiritual rocks of the US civil rights movement, influencing events in the American Deep South decades after his own death and despite never setting foot here.  Martin Luther King, Jr. was Gandhi’s disciple of sorts, and re-purposed a brand of non-violent protest that helped defeat the British Empire to effective use in crushing the different demon of inequality in America.  Centuries of injustice were ended largely by peace, love, and turning the other cheek in both cases.  Just this month in Charleston, South Carolina we were treated to the tear-inducing, amazing grace of family members of those nine souls slain by a white supremacist at church: a direct legacy of King and Gandhi that survives today in the South (a grace I regrettably and surely would not have displayed in the same situation).

Meanwhile, Vivekananda and Yogananda brought two other powerful seeds to America that have blossomed here and also around the world: yoga and meditation, along with related cultural imports such as vegetarianism, veganism, and classical Hindu music traditions.  If one hears a tabla or sitar in modern American music, or sees an all-vegan restaurant, or lives above a yoga studio, it’s no longer novel. Both Vivekananda and Yogananda were inspired to come to America by strong personal visions, bolstered by their own respective and formidable “Gurus.”

Meanwhile, (white) American thinkers such as Jonah Blank and Robert Svoboda have spent a great deal of time in India and elsewhere studying and writing about Hinduism, and from their uniquely American point of view helped explain deep philosophies not only for a Western audience, but also an Indian one.  For example, Svoboda has written a book on Ayurveda that was considered a textbook in my Hinduism course at Georgetown.  Your very own blogger on this site, Ambaa is a part of this great tradition.

Because I consider some aspects of Hinduism to be largely positive, I applaud these cultural imports even when they are pursued with low or no understanding of their origins.  Many Indians make fun of foreigners clumsily trying to do the “downward dog” yoga pose or speaking about their “chakras” or tattooing the “Om” symbol on the small of their back as if they had any idea what these really mean (they often don’t).  But the attitude of these Indians bothers me and I can’t join in the fun.  If the human heart yearns to learn something new, then who am I as a Hindu to stifle that yearning heart on the outside looking in, just because I was fortunate to have already been born and raised inside?  Not only on the inside, but descended from a long line of Hindu priests and scholars stretching back for centuries of South Indian history.

I do not believe that God prefers for some people, just because they are brown, to own a monopoly on Hinduism. I would like to be on the side of those Hindus who are responsible for welcoming in those curious strangers from near and distant lands with open arms, instead of making fun of them.  And I believe that my side will ultimately be the winning side.

It doesn’t matter who you are.  You may go to any Hindu temple across the United States or around the world, observe the idols and rituals, and in most cases enjoy delicious food too.  Some people will look at you funny.  Others, as in those on my team, will be glad you came.

Welcoming gestures should not be confused with proselytizing, forced conversion, or missionary zeal as we see too much of in this world, among Hindus or any other religion or cult.  Like all good relationships, I believe a person’s spiritual journey should be consensual.  Any truly enlightened soul understands that multiple religions can have something to offer each individual.  Hinduism at its core, is supposed to recognize that one can practice anything they want, including agnosticism and atheism, while still remaining part of Hinduism.

Therefore, I am here to humbly welcome you to learn more about Hinduism if you so desire.  Visit India if a part of you wants to see it.  By being on this page in the first place, you’ve already got a foot in the door if you aren’t indeed all the way in.  Do not let anything or anyone tell you that you must convert formally, give up your other religious beliefs, or God forbid, be a purebred Indian to practice Hinduism. Any roadblocks you encounter on this journey will be more than compensated for by the sign posts and lamps to guide you in the right direction.  By no coincidence of your own fate, this whole thing called the Internet has made the journey easier to traverse than at any time in human history. 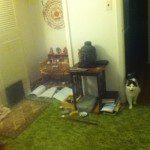