GUILTY- Even US police can no longer crush someone’s neck and get away with it. Black lives do matter.

I know that my view is going to be unpopular with some of my white American Evangelical readers. But I am very glad that George Floyd’s killer cop has been found guilty. This verdict is a vital step in bringing peace and reconciliation to the nation, and even to the World. This was a case that rightly impacted the globe.

I have never seen my brother, pastor, and friend Tope Koleoso so profoundly moved as he was speaking about this shortly after this murder first happened. He said that as a black man he couldn’t help but see his face under that white man’s knee. And in that instant I finally understood that as a white man I can never fully live in those shoes and understand the heinous impact of racism. Any more than someone who hasn’t had a life threatening and aspiration destroying diagnosis can ever fully understand what it is to experience that journey.

Speaking as a British Christian condemnation of the appalling actions of the police in this case was almost universal over here as far as I can tell. And most of my friends of all ethnicities understood that the appropriate slogan to highlight the issue was “Black Lives Matter” since it is black lives that have been cheapened and threatened. You do not have to agree with all the political aims of the movement of the same name to believe in the slogan passionately.

It was important that the perpetrator was given a fair trial. But the verdict does most definitely appear to be just to me from what I have followed. Nine minutes of neck compression is clearly never a justifiable use of force. And black people in America need to feel that the system takes their lives seriously and will issue justice on their behalf.

And yet a part of me is also sad today. Sad because I know some of my readers will not welcome this verdict. Sad because some of my readers do not understand the struggle that all black people face at least in some degree. Sad because it has taken so many years for it to be recognised that this kind of choke hold is never acceptable. And sad because so many others have died and not received justice. One quote from the BBB’s coverage seemed especially poignant to me:

“This is the first time a white police officer has been found legally responsible for the death of a black man in custody in Minnesota’s history” https://www.bbc.co.uk/news/live/world-us-canada-56721011

Here are some reflections I have published previously on this blog that may be of interest:

Evil Racist Murder we Must all Reject

Our Racism – deadly as COVID19 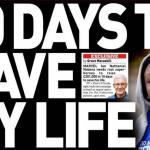 May 3, 2021 How you can save someone's life today. Individuals count to Jesus. Nathaniel Nabena needs a miracle
Recent Comments
0 | Leave a Comment
"Our FL is an "Angel in Disguise" !!! ^w^Ef.866J.CO/T5011i"
Dif Global Faith and the Media – ..."
"There seems to be something more behind those red eyes story. I want to know ..."
Curls_of_Blue Queen Elizabeth’s Rainbow – Did Heaven ..."
"Forget everything else..HER FATHER THO?! 🤣😂 He is so friggin' adorable!in.M6K2N.ME/v5011L"
zoogleflorp God doesn’t use anybody, so don’t ..."
"just kidding 😅you are my only daughter 😌lH.657HW.CO/VP5011N"
Salrissa “Do small things with great love” ..."
Browse Our Archives
Related posts from Adrian Warnock