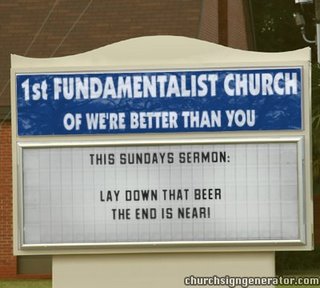 Niki Whiting recently wrote an excellent essay about a nostalgia she has for the Christianity she left behind. Niki writes that it is, to a certain extent, a false nostalgia, a “longing for something that never was.” She goes on, “At the core of this misplaced nostalgia is a longing for spiritual community.”  (I can’t do it justice here, so you should go there to read it … after you finish here, that is.)  Anyway, Niki’s post resonated with me.  My own desire for spiritual community sent me into an Greek Orthodox service not too long ago, and it prompts periodic outbursts from me on this blog about the inadequacy of Unitarianism.  (Incidentally, my venture to the Orthodox service was not what I had hoped. It was like they were speaking Greek. Well, they were speaking Greek, but I mean in a spiritual sense.  I loved the ritual in an abstract way, but the symbols were not mine.)

Anyway, after I read the title of Niki’s post, but before I read the essay itself, I started making a list of all the things I do not miss about Christianity — or more specifically about the form of Christianity I knew: Mormonism.  I was very excited to have an excuse to share with all of you my personal rant against Christianity/Mormonism.

And then, last night, I saw this post by Star Foster, the former editor of the Pagan channel here at Patheos, entitled “Going Home Again: Christianity After a 15 Year Absence“, at her blog, In the Garden, where not too long ago she was writing about Pagan polytheism.  Apparently, Star has been blogging for a Christian audience at a separate blog, “May Love Increase: An Apostate Reconsiders Christianity”, and recently decided to merge the blogs, effectively coming out to her Pagan/polytheist audience.

So I decided to take a time out from my Deep Ecology series and try to figure out the feelings I was having about this.  Not too long ago, another well-known Pagan blogger, Teo Bishop, (re-)converted to Christianity.  I was saddened by this, because I really, really enjoyed reading Teo’s writing about Paganism, and we were just starting to become online friends.  I thought Teo was a great person, and saw his departure as a loss to the Pagan community as a whole.  And I defended Teo’s right to decide his own path against anyone who attacked his character.

But I was surprised to find that my feelings about Star’s (re-)conversion were much stronger.  I was not friends with Star.  In fact, I sometimes felt personally attacked by her, as she took aim (in her writing here at Patheos) at anyone whose Paganism did not resemble her own.  I admit that I sometimes got a little perverse satisfaction out of dueling with her online, and I did not always take the rhetorical high ground in those encounters.  And so, in a part of me I’m not so proud of, I did feel a little vindicated when I saw Star’s post about her conversion — as if her life choices somehow make mine more authentic?! What a crock!

But there was something else too.  Anger … I think.  And much stronger than the disappointment I felt when Teo Bishop made the same move.  Contrasting their two personalities helped me to hone in on the real reason for my feelings … and on the one thing that I miss the least about Christianity … ME!

The thing that I don’t miss about Christianity is me, the Christian me, the person who I was when I was Christian.  And the reason why I felt such strong feeling about Star and her return to Christianity, and the reason why she always pushed my buttons when she was Pagan, is that she reminds me of me!  Star Foster (at least the Star Foster that I knew though her online writing) is a mirror of a shadow side of me that I would rather forget.

I remember once, not too long after I left the Mormon Church, I was arguing with my wife (who was still Mormon), and she said something like “You haven’t changed at all.” You know when somebody says something and it strikes you to your core?  Well, that was it for me.  I realized immediately that she was right.  I had changed my religious affiliation, but I had kept my fundamentalist, all-or-nothing, black-and-white mentality.  My new beliefs were just the flip side of the same coin.  I still had zero tolerance for ambiguity, and zero insight into the meaning of religion beyond the truth or falsity of its dogma.  Realizing this and actually changing it were two different things.  And so, even we I came to Paganism, I carried that attitude with me, searching for the one-and-only true form of Paganism, and being overly-concerned with belief and neglecting practice.  Well, that attitude led me right out of the Mormon church, and could have led me away from Paganism too, if I had continued in that way.

Blogging has been my salvation though.  Primarily because you, my readers, have been willing to call me on my sh*t — most of you, patiently and compassionately (some less so).  I am grateful to you for that.  You have been a great community for me.  Gradually, painfully, I have cultivated a more nuanced understanding of truth, as well as a less cerebral, more embodied sense of the sacred.  I’m still a work in progress, but I think I’ve made progress nonetheless.

One thing I have learned about religious zealots along the way is this: their need to convince everyone else that they are right is born of a need to convince themselves.  I know this, because I was (and part of me probably still is a little) a religious zealot.  My need to convince others of the truth of (my version of) Mormonism grew out of that place, deep inside me where I was not convinced myself.  And my need to “defend” my kind of Paganism against all the other kinds, that was born of an insecurity about the authenticity of my own Paganism.  I recognize my own fundamentalist attitude, mirrored back to me, in Star’s writing.  That that’s why she could push my buttons.  And that’s why her re-conversion to Christianity stirred up in me such strong emotions.  There, but for the grace of the Goddess, go I.

So today, in recognition of the fact that I am no longer the person I was when I was Christian, I am doing two things:

First, I am wishing Star Foster well on her path wherever it may take her … because I know she is more than the caricature I made of her in my own mind; she is more than a foil for my writing here; she is more than my shadow. She is her own person, with her own story, and her own pains and joys, and entitled to every consideration. Star, I wish

And second, I am burning my list of things I don’t miss about Christianity … because I realized that the thing I missed the least is that part of me that made lists about other people’s religion.

September 19, 2014 Roots of the Deep Ecology Tree: Rachel Carson, "A cry in the wilderness that changed the world"
Recent Comments
19 Comments | Leave a Comment
Browse Our Archives
Related posts from The Allergic Pagan 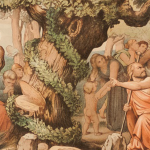