Mistakes I’ve made (on both sides): Atheists and Theists under the Big Tent of Paganism

Mistakes I’ve made (on both sides): Atheists and Theists under the Big Tent of Paganism February 9, 2015 John Halstead

Mistakes I’ve made as an atheist

A little while ago, an atheist friend of mine said to me that the difference between theistic Pagans and atheistic Pagans is that the latter don’t automatically leap to the conclusion that their experiences are trustworthy.  I have said this or similar versions of it myself in the past.  Our experiences don’t interpret themselves, and sometimes our interpretations are unconscious or automatic.  For example, we humans have an instinctive habit of seeing faces and other indicators of personhood where there are none.  (Consider the image above.)  Atheists tend to assume that theists are skipping the interpretive step.  “If only theists took the time to think about it,” says the atheist, “they would be atheists too.”

It’s taken me longer than it should have, but I have spoken with enough theists to know now that theism is not a default intellectual setting for many of them.  Many theists are fully aware of the logical difficulties of theism.  And far from leaping to conclusions about messages from the gods, many theists practice a rigorous method of discernment to distinguish divine communication from their own wishes, remaining especially skeptical of communications that align with their own desires.

“If the god you’re hearing never seems to stray (in appearance, tone, message, etc.) from what one would expect based on other people’s experiences, if They never surprise or even shock you, never challenge you, and if They are always there whenever you happen to turn your attention toward Them, then you are probably not touching the true nature of that god.” — Dver

“There’s also this silly idea that gets brought up that somehow if you believe in gods and spirits you must believe in them without any doubt or discernment. Again, no. Belief doesn’t cancel out thought, as much as some people might claim it does.” — Aine Llewellyn

“… while it is important for us to trust the evidence of our senses, it is also important to recognize the limits of our sensory frame of reference. This is a matter of fine discernment: the key is to recognize that our sensory experiences of the Gods are not the Gods themselves … it’s important to practice discernment about how we shape those experiences into a story about the nature of the Gods. It is important to remember that what we have is always and only the nature of our own encounter, filtered through the membrane that separates the full reality of these powers from our embodied experience. It is in this way that we can be both rational and authentic in our relationship with the Gods.” — Morpheus Ravenna

“I have an inner atheist too.  We get along OK.  He keeps me humble, reminding me that there are other interpretations for my experiences.  More importantly, he keeps reminding me that this world and the creatures in it matter at least as much the world of the Gods.” — John Beckett

Anyone who knows these folks or reads their blogs has to admit that they are thinking people.  They think deeply and deliberately about their religion.  We simply cannot assume that theists are unthinking.  If you are an atheist who believes this, you need to meet more theists.  I’ll introduce you to some, if you like.

Someone recently wrote in a comment to Jason Mankey’s essay “Gods or No Gods? (And Why It Sometimes Doesn’t Matter)”:

“… what I would call our personal God Power. Also, if we give that power to something else we diminish our own power. In this day and age needing a God Entity to lean on, or make magic happen, seems like another way to label your powers inadequate and therefore rendering your magic unattainable through self … you keep telling yourself things to diminish your personal power and I will be over here making my personal power a more and more powerful thing.”

I have said similar things myself in the past.  I relate to the experience of feeling disempowered by a belief in God/gods.  One of the reasons I left monotheism was because I felt personally disempowered by theistic religion, and non-theistic Paganism helped me to reclaim that power.  Having said that, it is one thing to say that I feel disempowered by a belief in gods, and another thing entirely to say that all people who believe in gods must be disempowered.  Such a claim overlooks the fact that millions of people are actually empowered by their belief in a God or gods.  Belief enables people to do things they would not otherwise be able to do.  Whether you believe it is the “god within” or the “god without”, the effect is the same.  We atheists need to be more careful about projecting our own experiences of theistic religion onto all theists.

Mistakes I’ve made as a theist 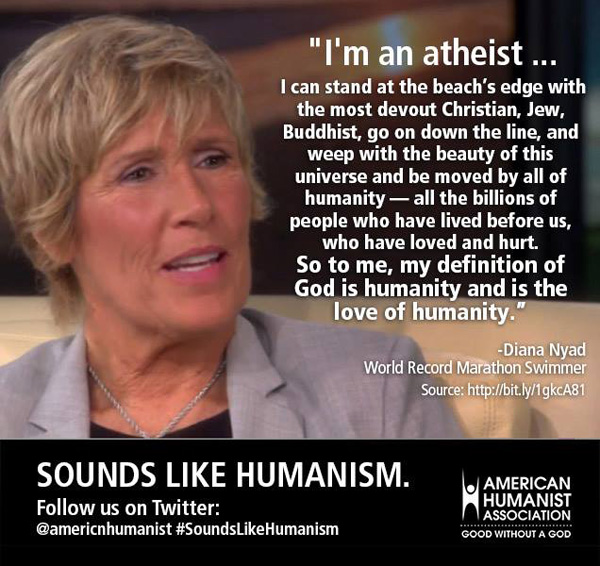 Just like some atheists say that theists don’t think, some theists say atheists don’t feel.  I have heard atheism compared to color blindness or tone deafness (or just plain blindness or deafness).  I admit to thinking this myself when I was a theist.  But, as I have written recently, theists don’t have a monopoly on religious experience, as I have learned myself since becoming an atheist   It is a myth that atheists don’t have religious experiences, a myth that many theists unwittingly play into by making their arguments without any reference to their personal experiences.  Listening to many atheists, one would think they’ve never had a religious experience in their lives.  This may be true for some atheists, but it is absolutely untrue for others.  In fact, as I recently discussed in my essay, “My god may be blind, but I’m not”, some atheists have had experiences which are very similar, if not identical, to those of theists — they have just come to different conclusions about those experiences.  The experiences of many atheistic Pagans tend more toward the pantheistic or mystical.  Oftentimes, our divine “Other” is nothing more or less than the natural world itself.  But being an atheistic Pagan does not preclude the possibility of more personalistic experiences of divinity that are familiar to theists.  This is especially true of non-theistic animists I have spoken with.

Listening to some of the more strident atheists, like Richard Dawkins, one may be left with the impression that being an atheist is equivalent to being contemptuous of theists or out to “de-convert” them.  I’ve even seen the terms “dominionist” and “colonialist” applied to atheists by some Pagans.  And let’s face it, some atheists are just plain a$$h@les.  In fact, this image of the angry and aggressive atheist kept me from embracing the term for a long time, even though I technically was an atheistic Pagan.  While there are some atheists who seem to be on a mission to purge the last drop of (what they perceive as) irrational belief from the world, that’s not all of us.  In my experience, the attitudes of atheists vary as widely as do those of theists.  Some are evangelical about their atheism; others are more live-and-let-live.  And this applies to atheistic Pagans, as well.

Having said that, it is inevitable that theistic Pagans will sometimes feel their beliefs are under attack by atheistic Pagans.  This is because

As a result, many atheistic Pagans are less reserved about challenging others’ beliefs.  While everyone is entitled to their opinion, people are not entitled to unchallenged opinions.  (The virtue of the First Amendment is not that everyone has to respect our opinions, but that we have the benefit of listening to others’ opinions.)  Having your beliefs publicly challenged is not an infringement on your right to have those beliefs — especially when you choose to share your beliefs in a public forum.  Nor is it evidence that atheists are intolerant.  As Mark Green explains: “Tolerance doesn’t mean … we have to treat all opinions equally; the position of the handful of fossil-fuel industry climate change deniers is not entitled to the same respect as is that of the overwhelming majority of climate scientists. But it does mean we have to respect the person, even if we think their position … was arrived at by an intellectually faulty process.”

It’s not uncommon for theistic Pagans and atheistic Pagans to feel that the other is ruining Paganism for them in some way.   This manifests itself in battles over terminology and debates about who is and who isn’t a “real Pagan”.   Both sides may try to claim the the historical precedent by pointing to either ancient Pagans who interpreted the gods metaphorically (like Plutarch or the Stoics) or to ancient polytheists who perceived the gods to be literal people.  Or they will resort to the stereotypes I described above: “theists are unthinking”, “atheists are unfeeling”, etc.

As I said in the beginning, no one is ever going to win this argument.  We have to learn to share common Pagan spaces, like the Pagan blogosphere and Pantheacon.  Someone recently said to me that we will find our acceptance in the Pagan community to be in direct proportion to own equal acceptance of the beliefs of others, and I agree.  (Of course, acceptance does not have to mean agreement.)

What’s more, sharing these mutual spaces — real and virtual — can challenge us and help us to grow.  Both sides have something to teach the other.  When I was a theist, atheists reminded me to critically examine my interpretations of my experience, to cultivate a tentativeness or a provisional attitude toward all truth claims, and to look for what I had called “God” within myself and in the natural world around me.  Now that I am an atheist, theists remind me not to privilege abstract thought over direct experience, to have the courage to take emotional leaps of faith, and to keep a lookout for the divine “Other”.  It is my hope that recognizing the stereotypes I described above as such will help us to be more hospitable in the space we share under the Big Tent of Paganism.

But while we need to learn to share some spaces, I think it is also good that both theistic Pagans and atheistic Pagans are carving out special spaces for themselves.  We all need places where we can gather with like-minded people, to feel both safety and support.  This is why I am encouraged both by the flourishing of spaces for devotional polytheists, like polytheist.com, the Polytheist Leadership Conference, and the upcoming Many Gods West gathering, as well as by the growth of the Humanistic Paganism community, the launch of the Atheopaganism site and Facebook group, and the upcoming Atheopaganism events at Pantheacon.  I think that having these spaces for ourselves will also help us be less territorial about the shared space of Paganism.

February 14, 2015 It's 5 a.m. at Pantheacon
Recent Comments
0 | Leave a Comment
Browse Our Archives
get the latest from
Pagan
Sign up for our newsletter
POPULAR AT PATHEOS Pagan
1

It's All Fun and Games Until...
Fivefold Law
Related posts from The Allergic Pagan