7 Reasons Why Christmas is Part of My Pagan Wheel of the Year December 24, 2015 John Halstead

“Whenever I hear a Neo-Pagan say that the winter solstice is a ‘minor Sabbat’, I can’t help but roll my eyes.  What makes it ‘minor’?  The fact that Margaret Murray only listed the cross-quarters as witches’ sabbats?  Because Gerald Gardner only added the quarter days as an afterthought?  There are eight stations on the Neo-Pagan Wheel of the Year.  Why would one spoke of a wheel be minor and another major, especially in a tradition that emphasizes balance?  And if one is going to be minor, why the winter solstice of all days, the day the light begins to return, the day most of Western civilization is praising the birth of the Son/Sun?   Really?  Imbolc is “major”, but Yule is “minor”?  I don’t think so.  I suspect that this “minor” stuff is just a way of trying to keep Yule from becoming Christmas (which is anything but minor).”

“… the assumption always seems to be that a religious tradition must be pure of other influences in order to be legitimate (a function of thinking that all religion is revelatory religion).  There is probably no such thing as a pure religious tradition in reality.

“Even if it there were a pure religious tradition, I prefer those bastardized traditions that are a mix of many influences.  Christmas (like Hallow’een) is a sublime mix of Christian, pagan, and commercial traditions as Jason Mankey has recently detailed.  And I love it that way.  Whether you are Christian, Pagan, or atheist, I say, ‘Embrace it. And make it your own!’

“There’s good precedent.  If anything is true about the history of religions, it’s that nothing is so sacrosanct that it can’t be borrowed, appropriated, stolen, revised, amended, and ‘reclaimed’.  I suspect that Gerald Gardner was a misogynist and maybe a bit of a perv.  But did that stop religious feminists in the 1970′s from appropriating Wicca and rendering it ‘wimmin’s religion’?  No!  Ancient pagans were patriarchal, tribal, and not always ecologically wise.  But did that prevent a bunch of hippies from making it into an earth-centered religion of a Great Goddess?  No!  And Jesus most likely intended only to reform Judaism, but did that stop Paul from turning the movement into a universal religion for all Gentiles?  No!  So whatever its origins, Christmas is fair game.  And we Pagans should own it.“

3.  Mabon is the Reason for the Season?

“For me, the winter solstice marks the beginning of what John Beckett calls the “Twelve Days of Solstice” which encompasses Christmas Eve, Christmas, and the New Year.  Really, it’s all the same thing to me, one long celebration of light emerging from the darkness.  The longest night of the year is when the light is symbolically reborn and the days begin to lengthen again.  The darkness, in the form of the Holly King (Santa Clause?), still reigns, but it begins its decline, as the light begins its ascendancy.  The Goddess returns from the Underworld.  She travails and bears her Son, the Sun Child (i.e., Mabon).  The Goddess’ ascent from the tomb mirrors the coming forth of the Sun Child from the darkness of her womb.  This theme runs through the solstice, Christmas, and the New Year.”

4. What the Christ Child means to this Pagan

“When I left the Mormon church, I felt like I was leaping into a dark void.  I had no belief system to replace the Mormon faith I was rejecting.  It was frightening and disorienting.  It felt like a little death.  I needing something desperately, but I really was not looking for a new religion.  In fact, I had a pretty negative attitude about organized religion in general.  Instead, I turned to art.  Without really realizing what I was doing, I began looking for artwork that resonated with the deep part of me that was longing for something.  One of the first images that really had a profound impact on me was William Adolphe-Bouguereau’s Virgin and Child (1888).  I bought a reproduction of the painting, framed it, and hung it in our small apartment.

“It may seem strange that I would embrace one of the most archetypal images of Catholicism while simultaneously rejecting organized religion. … I had the longing for connection with the Divine Feminine, but the longing remaining unsatisfied while I was Mormon.  I didn’t realize it at the time, but I think I was drawn to Bouguereau’s painting because of this longing.

“Gradually, over time, I came to embrace the dark abyss — the groundlessness, the unknowing — that I had leapt into when I left Mormonism.  Or perhaps it embraced me.  She embraced me.  For did I come to recognize the darkness as the Goddess — not the cold darkness of hell, but the warm darkness of the womb.  She opened to me ‘the dark soft places deep as between the stars’ (D.H. Lawrence), and I found rest in a place like the dark folds of Mary’s robe in Bouguereau’s painting.   And in that place, something new was gestating: a new sense of self, a new perspective on the world, and a new religious vision … which I later came to call ‘Paganism’. …

“As surely as a part of me died when I left Mormonism, something new was born inside of me, which eventually flowered into my Pagan faith.  I realize now that I latched on to Bouguereau’s painting as an unconscious expression of what I was experiencing internally.  So as I gathered with my family this past Christmas morning, I felt no conflict in telling my children that the eternal birth of the Divine Son did take place … one long dark night in my own soul.“

5. Coming to terms with the Christian origins of Paganism … or why my Pagan Yule sounded a lot like Christmas

“This aversion seems strange in light of the fact that the father of Neopagan witchcraft, Gerald Gardner, did not himself see any necessary contradiction between Christianity and witchcraft. …

“The interesting thing about the story of the origin of the Wheel of the Year is that it began with Jesus — specifically with Frazer’s intent to discredit Christianity by suggesting that the figure of Christ had been an outgrowth of the pagan belief in a dying and reviving vegetation spirit. …

“… there is a historical debt that the Neopagan Goddess owes to Mary.  If there had not been a Virgin Mary, perhaps there would not have been a Neopagan Goddess — at least not as we now know her. …

“On the corporate level, Neopaganism as a movement grew out of and in reaction to Christianity.  On a personal level, probably most Neopagan converts to Christianity came from a Christian background.  And even those who did not came, for the most part, from a culture with is predominately Christian.Coming to terms with our Christian origins is, I believe, necessary to the maturation of the Neopagan movement. …

“… I wonder what might happen in our movement if we began to understand Neopaganism, not as a rejection of our Christian past, but as building upon that Christian past.“

“So what to call this solstice season?  I like the name ‘Yule’.  It’s Anglo-Saxon, which corresponds with the other Anglo-Saxon names for the summer solstices and spring equinox.  It is also useful from an interfaith perspective, in that it is not completely foreign to Christians (‘Yule-tide cheer’).  The only problem is that no one knows the origin of the word ‘yule’.  (I’ve seen etymologies to ‘wheel’ and to ‘jolly’ to ‘sacrifice’.)  I do have a problem with the name ‘Midwinter’ though, which is the second most popular Neo-Pagan name for the date.  Here in the United States, late December is the beginning, not the middle, of winter.  The middle of winter actually comes in early February, halfway to the Spring Equinox.  There are plenty of other good names, though.  ‘Winter Nights’ (already used by Heathens) and “Mother Night” (Modranicht), which comes from Bede, aptly characterize the seasonal theme.  Another possibility is ‘Sol Invicti’ from the Roman festival, ‘Dies Natalis Solis Invicti’ (Birth Day of the Unconquered Sun), which Christmas replaced.  I like to think of the night preceding the solstice as ‘Modranicht’ and the day after as ‘Sol Invicti’.“

“The only other bone I have to pick with the solstice season is its overemphasis on the light.  Light all the candles you want — the more the better — but remember that what makes those candles really shine is the darkness in the background.  This is after all the season of the Holly King, the dark twin of the Oak King who is born at the summer solstice and grows in power as the Sun’s strength weakens.  I think there should be a little of the feeling of the Wild Hunt left over from All Hallows.  And there’s plenty of dark material we could draw on.  Sorry Megyn Kelly, there is a black Santa.  No, I’m not talking about Billy Bob Thornton.  I’m talking about characters like Black Peter and the Krampus.  (Thanks to Jason Mankey for turning me on to these dark fellows.)  I wouldn’t mind a little sinister with my jolly.  That’s why I love the picture of the Holly King above.  (I don’t know if that look is protective … or hungry.)  I mean, can we really call ourselves Pagan if we’re not scaring some Christians a little bit?” 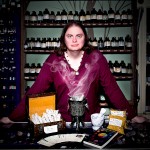 December 21, 2015
Join Taylor Ellwood of Magical Experiments and me tonight as we explore what atheist Paganism is
Next Post 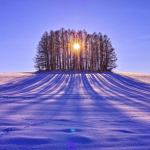