The gods are “like warm apple pie”: The hidden meanings behind our metaphors

I don’t know what is going on with all the apple metaphors.

First, John Beckett compared gods to apples.  I made the case that, if the gods are apples, they are a softer kind of apple than John likes.  Tom Swiss, Pat Mosley, and Yvonne Aburrow have all extended the metaphor in unique and entertaining ways.

Now Beckett says the gods are more like apple pies.  He uses the metaphor of the “bakery of the gods” to express his concern that people new to polytheism might be confused by the myriad ideas about the gods.  In his metaphor, someone who has lived their life with only vanilla pudding comes into the bakery to find apple pie, and is confronted with people extolling the virtues of chocolate cake and various other desserts, while others steal or switch the labels on the pies, leaving the poor bewildered customer at a loss where to find his beloved apple pie.

Beckett’s metaphor is fun to read, but it also has some very serious flaws.

1. Metaphors are not value neutral.

There’s a reason why Beckett chose vanilla pudding to represent someone else’s religion and why he chose apple pie to represent his own.

Then there is apple pie, which is traditionally associated with wholesomeness, home, and patriotism (although for some of us it might be more associated with a certain movie).  It is these qualities that Beckett invokes (consciously or unconsciously) when he compares his own religion to apple pie.  The point is that there are hidden value judgments in even seemingly innocuous metaphors.

Beckett’s analogy doesn’t give people enough credit — he assumes that people can’t tell the difference between hard and soft polytheism or between polytheism and other theisms.

In his analogy, someone walks into a bakery looking for “a warm dessert with a pastry crust and chunks of tangy fruit” and with the smell of “cinnamon, nutmeg, and sugar.”  Beckett wants them to find the apple pie.  But no one is really going to confuse apple pie with chocolate cake.  And if they decide they want chocolate cake after the get to the bakery, then so what?  Similarly, when someone comes to Paganism looking for a certain kind of polytheism, and they end up being drawn to another kind of Paganism, who is Beckett to second guess them?

And how many people are really going to be confused if the apple pie label gets switched with the cheesecake label?  Now, perhaps if the pies are not clearly labeled, a person might walk away with a peach pie instead of an apple pie.  But a peach pie is “a warm dessert with a pastry crust and chunks of tangy fruit” which can smell of “cinnamon, nutmeg, and sugar,” too.  Who is Beckett to say they got the wrong pie?  And if they really wanted an apple pie, and they got a peach pie, all they have to do is go back to the store and get the pie they want.  They’re not married to the peach pie.  And this time they’ll cut into the pie before the leave the store to make sure it’s what they want.

Similarly, a person who wants hard polytheism may get involved with a soft polytheistic group.  So what do they do?  They leave and go find the kind of group they wanted.  It’s not like they’ve made a lifelong commitment.  And next time they’ll ask more questions before they get involved.

I don’t think I need to expound on how consumeristic our culture is or how religion has been transformed into a commodity.  Beckett’s metaphor plays into this dynamic by comparing the search for a religion to a shopping trip.  Not only does it turn our religions into products to be consumed, but it also presumes a competitive religious culture and a zero-sum game.  The apple pie makers lose when someone chooses chocolate cake.  Is that really how we see the relationship between the various Polytheist and Pagan paths?

I have to wonder, is Beckett really worried that someone is going to confuse apple pie and chocolate cake, or is he just concerned, if given the choice, more people will choose chocolate cake over his favorite dessert?  Maybe this is what is underlying his mockery of those in his metaphor who say, “Dessert is a private matter, and if someone ends up with cherry pie then that’s the dessert they were meant to have.”  Isn’t religion a private matter?  And who is Beckett to say that a person ended up with the wrong religion?

Beckett uses the word “objective” when describing the differences between desserts: Apple pie is “objectively” different than chocolate cake.  But can we really use the word “objective” when talking about gods?  Obviously, in many ways, gods are not like pies or apples.  No one doubts the existences of pies or apples, because they are material objects which where can see and touch and taste whenever we want, and we can share that experience with everyone around us.  No matter how visceral your experience of the gods, the gods are not “objective” in the same way apple pies are.

A better analogy might be to say the gods are like love or beauty — they are real and among the most important and meaningful experiences of our lives, but they are not “objective.”  Or we could say they are like electrons — they have an ambiguous relationship with the material world and they seem to change by virtue of our perceiving them.  There are a lot of metaphors we could use to describe the gods — apple pie is not among the best.

We can multiply and extend these metaphors ad nauseam.  But in the end, I can’t help but feel that all of these analogies are obscuring, more than they are revealing. 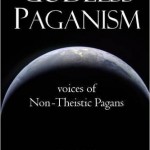