I have been giving a lot of thought to a recent news story that, to me, epitomizes the difficulties of Christian political activism – anywhere, any time.

Here’s the background. Syria is in the middle of a brutal civil war, as revolutionaries attempt to overthrow the Ba’thist regime of President Asad. Although corrupt and repressive, the old regime has the virtue of being strictly secularist, which is why the country’s large Christian minority generally supports it, or at least is very dubious about the revolution, which has a strong Islamist strain. Regime change would at best mean an Islamist government, at worst a national fragmentation that would produce an endless sequence of further conflicts.

Recently, though, the regime expelled a harsh Christian critic, the Jesuit priest Father Paolo Dall’Oglio, who is the subject of a major Los Angeles Times article titled “Ousted priest committed to peace in Syria.” Father Dall’Oglio continues to be a strong supporter of the revolution, and he attacks those who defend the Ba’thists because of fears that Christians would suffer disastrously under a new regime. Partly, his critique is based on a political judgment that the revolution is not as Islamist or jihadist as many observers think.

More generally though, he suggests that people of all faiths should oppose the Ba’thists because it is a moral absolute – it is the right thing to do, regardless of consequences. Revolution against tyranny is justified, even demanded, even if that means supporting armed violence: “If nonviolence becomes another name for a lack of responsibility, then I am not with nonviolence anymore. I am with the right to defend people.” He bases this argument in a radical Christian confession: “How can we as Christians go with the lies of the regime and stick with the confessional complicity in renouncing the specificity of the Gospel, renouncing the fight for human dignity and freedom?”

Based on my reading of the situation, Dall’Oglio gravely underestimates the long-term dangers to Christians, but that is a question of interpretation. His deeper argument, as I understand it, is that Christians have an absolute duty to support the cause of justice, even if that means destroying their own position and possibly leading to the destruction of their community in Syria – much on the lines of what happened in neighboring Iraq over the past decade. (Saddam Hussein was another secular Ba’thist).

You can make a case, based on a radical interpretation of the gospel, that that is the only correct course of action: Christians are ordered to do the right thing, even at the cost of provoking martyrdom for themselves and their families. St. Paul says that Christians find their true strength “in weaknesses, in insults, in hardships, in persecutions, in difficulties”, and should actually delight in them (2 Cor. 12.10). But should they actively seek out such horrors? That is a very hard saying. You can also argue that an individual should be free choose a course that leads to martyrdom, but has no right to invite comparable suffering for thousands of others who are not prepared to make that call.

In other ways too, Dall’Oglio’s ideas are radically unrealistic. His present demand is that the United Nations should intervene in the Syrian war, but with “massive, nonviolent intervention: 3,000 unarmed observers and 30,000 civilian peacekeepers deployed in Syria to help ‘initiate a widespread start of grass-roots level democratic life’.” To say the least, political realism is not the Father’s strong suit. But should it be, for a Christian leader?

Part of me wants to sing his praises as a prophet of authentic Christianity. Part of me thinks he’s spouting dangerous nonsense. But the story does raise the key ethical dilemma: is it ever right and moral for Christians to support a tyrannical minority regime because it serves their communal interests? You can in theory defend the gospel through secular power – but should you?

Let me quite honest about this. If I were an Arab Christian, I would hope for the survival of the Ba’thist regime, as opposed to any likely alternative. And you can tell me to your heart’s content about why that position is inconsistent with the traditions of the faith. I understand the inconsistencies, I just don’t yet understand how to navigate around them. 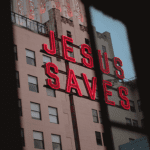 July 10, 2012 "Ask Jesus into Your Heart": A History of the Sinner's Prayer
Recent Comments
0 | Leave a Comment
"Impressive article. Provides the necessary perspective for entering into an informed discussion about the science/religion ..."
the old scribe Science, Religion, and Nineteenth Century Protestantism
"Very helpful! Thanks! It seems history has always been used as a weapon."
Roger McKinney Science, Religion, and Nineteenth Century Protestantism
"You have done nothing to refute my point. Certainly we should do the affirmative things ..."
NorrinRadd Ron Sider and the Fate of ..."
"When we try to prohibit behavior that many people consider, we simply drive the behavior ..."
Silverwolf13 Ron Sider and the Fate of ..."
Browse Our Archives
Related posts from Anxious Bench