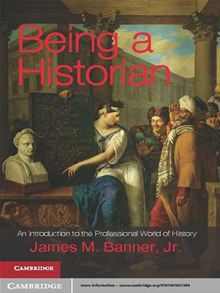 anner’s Being a Historian: An Introduction to the Professional World of History should be required reading for every first-year student enrolled in a history graduate program.  There is no other book like it.

Banner is a history veteran.  He taught at Princeton from 1966 to 1980 and then left to start the American Association for the Advancement of the Humanities.  He co-founded the History News Service (where he shepherded some of my first attempts to write op-eds) and the National History Center.  I can’t think of a better person to write an introduction to the historical profession.  Banner has done it all.

Rather than writing a formal review of the book, I have chosen, fitting with the blog format, to focus my attention on a few pertinent points.  I hope this quick and dirty analysis will prompt you to pick the book up.

1.  Banner wants to change the old academic adage “publish or perish” to “satisfy peers about your ability to pursue research and present it effectively in a form of your choice to any chosen audience, or perish.”  Such a change would move the profession away from the notion that the dissemination of historical knowledge only happens through print.  As Banner puts it, “…the media for the presentation of knowledge have broadened” but the “professional advancement and recognition have not.” (p.78)

2.  Banner raises a very interesting point about the role of institutional service in colleges and universities.  If colleges and universities are responsible for serving the larger world, why do they require faculty to commit to service on an individual basis?  Aren’t faculty, by virtue of the fact that they are teaching and writing, contributing to the mission of the college and university? (p.99)  Banner’s point here made me think about the whole concept of “service” in the so-called “Academic Trinity” (teaching, research, service).  Does “service” mean service to the institution or to the larger public?  Too often at my college it is interpreted in terms of serving on committees, but this seems to be a very limited understanding of the kind of service performed by historians and other academics.

3.  I think Banner overstates the case when he discusses the “continuing failures of instruction at the secondary school” and, consequently, the need for history professors to “resuscitate a love of historical knowledge that has been often seriously injured if not killed in school….” (p.109). While there is certainly some truth to this, it fails to recognize many of the teachers I encounter during my work for the Gilder-Lehrman Institute or the kinds of teachers that my daughters have been exposed to in their history courses.  These are outstanding teachers who are deeply committed to their work and do an effective job of getting their students excited about the past.  Perhaps these teachers  are the exception to the rule.

4.  The best chapter in the book is Chapter 5: “History Outside the Academy.”  Banner distinguishes the difference between “public history” and “applied academic history.”  Public history, he argues,  deepens “the public’s living consciousness of its past in ways that members of the public request, not because of the current trajectories of historiography.” (p.144-145) “Applied academic history,” on the other hand, is the application of academic history to public concerns, such as the expertise that historians offer to government agencies or in preparation for legal cases.  (Banner references the work of John Hope Franklin, C. Vann Woodward, Herbert Gutman, and others in contributing to the famous Brown v. Board of Education case). (p,130-132).

5.  Can a historian be a public intellectual without somehow sacrificing his credentials as a historian?  Banner thinks that historians can wear multiple hats.  They can be an “eremitic scholar” one moment and a public commentator or popularizer another. (p.160).  But in the end, the historian, as historian, has a limited role to play in shaping public opinion.  Banner writes: “Being concerned with the past, works of history can only imply, they cannot as history propose, courses of action; they can evaluate, sometimes magisterially, the conditions of society and culture, but they cannot as history directly help society out of its predicaments.  The historians of greatest weight and influence tell stories of times gone by rather than analyze current affairs….[Historians’] work must stand or fall, not on the temperament or ideology their authors bring to it…but instead on their foundations in knowledge and the power of their presentation.  Reform may arise from historical knowledge, but bringing about reform is the province of others–or at least of historians on their days off.” (p.164).

6.  Banner argues that historians who want to be public intellectuals must be willing to take risks.  They must write in accessible prose, avoid engaging in historiographical debates, and treat their readers “as fellow citizens.”  They must risk “committing the Whig fallacy of presentism.”  Such work “requires donning the critic’s mantle: of evaluating the general culture from a historical perspective, and often of calling to account others’ misuse of the past.” (p.166).

7.  Not all historians need to write for popular audiences.  Specialized scholars are needed.

8.  With an increasing number of opportunities available outside the academy, graduate students can shape their careers “to be faithful to their individual selves.” Yet, such non-academic pursuits continue to carry some risk–the risk of failure and the risk of criticism from colleagues and mentors are the most prominent. In the end, Banner advises young historians to go for it–to be as creative as possible in the pursuit of a historical life.

I found this book to be deeply satisfying and honest.  I have a hunch that you will too.

August 2, 2012 An Icon of Mormon Christianity
Recent Comments
3 Comments | Leave a Comment
"Thank you! Just one thing. Is this two different approaches to one event, or is ..."
philipjenkins Books Against Books
"Hosea 1:4 is condemning the actions of Jehu (the massacre at Jezreel); whereas 2 Kings ..."
Anthony Parrott Books Against Books
"Those werent matters of personal preference as the passage makes clear. Everyone thinks their hobby ..."
Roger McKinney The Cost of Staying Silent
"When it's matters of pure personal preference, yes. But the question of the roles women ..."
Eeyore The Cost of Staying Silent
Browse Our Archives
get the latest from
Anxious Bench
Sign up for our newsletter
POPULAR AT PATHEOS Evangelical
1