A few weeks ago, popular Christian history writer David Barton presented his standard two-hour presentation at a church in my area.  At the urging of colleague John Wilsey, who has written against the concept of Christian America that Barton advocates, I attended.  I’m glad I went.  As an historian, the problems with the story that Barton weaves have been obvious to me for quite some time.  Yet, that evening, I gained clarity regarding why Barton’s narrative troubles me as an evangelical.

In several ways, Barton’s presentation surprised me.  First, Barton was interesting and engaging.  Second, although he played to the evangelical penchant towards anti-intellectualism, I did not find him arrogant.  In fact, he came across as pleasant, not haughty.  Third, he prominently featured African Americans as historical actors.  He spent some time discussing important black patriots such as Peter Salem and Lemuel Haynes, rightly noting that Americans “have done a poor job with black history.”

The first half of Barton’s presentation was fairly innocuous.  Combining a litany of facts, quotes and visuals with his skillful storytelling, Barton presented the founding generation as more religious than many standard treatments portray.  They quoted and alluded to the Bible, they showed confidence in God, and they participated regularly in religious activities.  Further, Barton rightly pointed out that Americans have been trained to religiously interpret the entire founding generation as Franklin and Jefferson writ large, an approach that downplays the significance of religion in the revolutionary era.

Had the implications of his presentation stopped there, I might have quibbled over some factual issues but would not really have objected to the overall thrust of the effort.  Albeit with greater quality, effectiveness, and persuasiveness, historian Thomas Kidd offers a similar corrective, while Richard Bushman, Nathan Hatch, and Rhys Isaac and others have demonstrated the crucial role that religion played in birthing the revolution.  But much more was implied, and therein lay the biggest problems.

After the break, Barton reminded us of Proverbs 14:34: “righteousness exalts a nation (NIV).”  From that point forward, his endgame emerged.  Prior material now became the basis for standard fare American exceptionalism: the United States has been uniquely blessed because of its Christian character.

Problems of fact became secondary as the larger interpretive problem emerged.  Presentism, reading the past through the eyes of the present, became a tool for Barton’s agenda, functioning as the lens through which Barton’s auditors were expected to interpret the founder’s words. 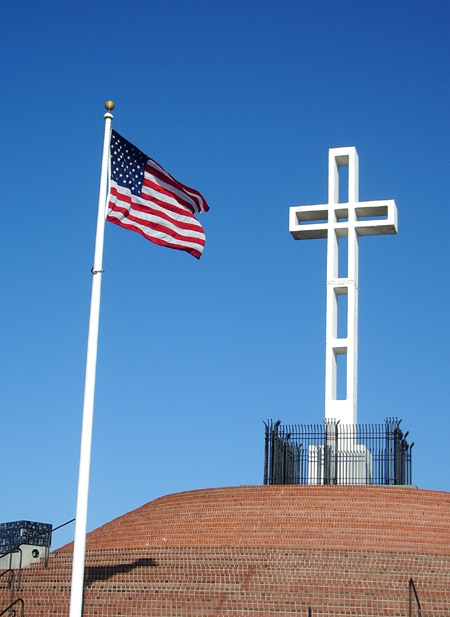 If the founders used Christian words, they must mean what we mean.  Divorced from their context, quote after quote made founder after founder sound evangelical.  Even Charles Carroll, the sole Roman Catholic signer of the Declaration of Independence, came across sounding like a good Baptist.  (Barton never mentioned that Carroll was Catholic.)

At the end of the presentation, Barton’s auditors were left with the following impressions: the founders were religious.  They were religious just like me.  Because they were religious like me, God has uniquely blessed America, per Psalm 33:12.  And, if we want the blessings to continue, we need to elect righteous people.

I then realized that the biggest problem with David Barton is not bad history or proof-texting.   The biggest problem is his version of Civil Religion, wherein the nation displaces the church, and America emerges as the new Israel with whom God has a special covenant.  Even the setting reinforced this idea: we sat on pews in a sanctuary; the American flag was prominently displayed; we recited the pledge of allegiance; and prayers were offered for the nation.

Consequently, in Barton’s scheme, politics replaces discipleship, and the nation, not the church, becomes the focus of our efforts towards righteousness.  Further, the church becomes a servant to the state, extolling America’s blessed history, proclaiming its righteous mission, and praising its glorious leaders.  And thus, by taking Christ’s place in the church, the nation becomes an idol. And that is something my evangelical convictions cannot countenance.

October 11, 2012 Pew Report: More Nones, Fewer Protestants
Recent Comments
28 Comments | Leave a Comment
"Intriguing. I didn't know that Walter Rauschenbusch was a prohibitionist! Odd, since his book,Christianity and ..."
Daniel Wilcox “Everything You Know about Prohibition Is ..."
"My mother was a Baptist preacher's daughter, born in 1935. She used to "play church," ..."
Jon Altman What I Learned from Designing Women ..."
""Bernice reminds Reverend Nunn that for every time Paul seems to silence women, Paul elsewhere ..."
Rick What I Learned from Designing Women ..."
"We (the Lutheran World Federation) condemn Luther's antisemitism and have asked forgiveness from the world's ..."
Harvey James Johnson What Is a Heretic?
Browse Our Archives
get the latest updates from
Anxious Bench
and the Patheos
Evangelical
Channel
POPULAR AT PATHEOS Evangelical
1