Book of the Year — When God Talks Back

Book of the Year — When God Talks Back December 6, 2012 johnturner

‘Tis the season for list-making. My co-bloggers have given you their five favorite religious biographies and seven best books read this year, respectively. Let’s face it. There are a lot of great books about American religion rolling off the presses each year. Making lists of good books is easy work. It’s harder to pick the book of the year. I, however, am ready for such boldness. 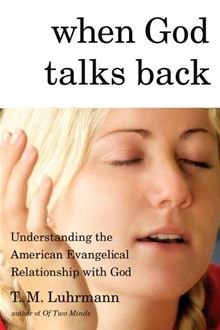 It’s not a work of history, but the best book on American religion published this year is Tanya Luhrmann’s When God Talks Back: Understanding the American Evangelical Relationship with God. This is not just, or even primarily, a book for scholars of religion. Everyone would benefit from contemplating Luhrmann’s analysis of evangelical prayer practices: “ordinary” believers, pastors (very important), university instructors of U.S. History and religion, and — she takes pains to point out — non-Christians. See reviews here  and here. Listen to interviews with Luhrmann on NPR’s Fresh Air and Albert Mohler’s podcast. Most of all, however, make time to read the book.

Luhrmann’s book consists of several parts. First, she (a psychological anthropologist) spent several years doing field work in two Vineyard congregations, one in Chicago and one in California. She attended worship services and Bible studies, she had a prayer partner, and she conducted in-depth interviews with congregants about their experiences of the supernatural. She observed that through the assiduous practice of prayer (and other ways of cultivating an intimate relationship with God/Jesus), evangelicals “override three basic features of human psychology: that minds are private, that persons are visible, and that love is conditional.” They retrain their minds by relating to God as an imaginary friend. In short, they pretend that God and Jesus exist, and in the process of such childlike, imaginary play, God becomes “more-than-real” to them. God begins to interact with them. They rarely hear an auditory voice, but they nevertheless hear God speaking to them, guiding them through their everyday lives.

Second, after her fieldwork, Luhrmann presided over an experiment that sought to ascertain why prayer “works” for some people more than others and whether or not individuals can engage in specific practices that enable them to sense God. Using the Tellegen Absorption Scale, Luhrmann found a correlation between individuals with a high capacity to become “caught up in ideas or images or fascinations.” Her hypothesis: “when people believe that God will speak to them through their senses, when they have a propensity for absorption, and when they are trained in absorption by the practice of prayer, these people will report what prayer experts report: internal sensory experiences with sharper mental imagery and more sensory overrides.” [Note: what Luhrmann terms “sensory overrides,” others might consider hallucinations]. To test her hypothesis, the subjects in her experiment (her Spiritual Disciplines Project) received an iPod with one of three conditions: kataphatic prayer (for example, visualizing the 23rd Psalm, having a dialogue with the shepherd / Jesus, and then imagining Jesus as a comforter in a difficult past moment), apophatic prayer (through which one seeks to clear one’s mind of any internal and external sensations) , and lectures by Luke Timothy Johnson on Jesus and the Gospels. Those who did the kataphatic exercises then tested higher “on the subjective measures of mental imagery vividness” and were more likely to report “sensory overrides.” Moreover, Luhrmann concludes that such prayer practices “seemed to give people more of what the scriptures promise those who turn to Christ: peace and the presence of God.” Apophatic prayer produced similar results, but the subjects reported more frustration because of the more difficult techniques. The lectures (despite Luhrmann’s professed love for them) did not produce such results. Some subjects, those who are “low in absorption,” simply had great difficulty “hearing from God.”

There has always been a thin line between intense religious experience and madness, especially in the eyes of those critical of certain varieties of religious experience. One thinks of criticisms leveled at the revivals of the early 1800s or of the Asuza Street Revival of the early 1900s. Luhrmann argues that (most) evangelicals are not “crazy.” For evangelicals, sensory overrides are rare, brief, and — for the most part — conducive to a peaceful, high-functioning existence. Psychotic hallucinations are frequent, extended, and typically destructive. Luhrmann, however, offers a warning for those congregations who teach Christians to engage in spiritual warfare. “[R]uminating on demons is dangerous…”, she suggests, “because through the intense practice of prayer the demons become real to those who pray, and haunt them.”

In a closing chapter, Luhrmann reflects on the recent trajectory of Christianity in the United States. She observes that both liberal Protestants and fundamentalists both responded in ultimately unsuccessful ways to the challenge posed by modernity (including, among others, Darwinian evolution, higher criticism, and religious pluralism). In a sense, both stripped Christianity of supernatural mystery. Liberals jettisoned the “supernatural elements in the scripture,” and fundamentalist inerrancy also embraced a rationalist, scientific approach to the Bible antithetical to earlier traditions of interpretation more open to mystery. As many of their Protestant forebears, fundamentalists (particularly in response to the challenge of Holiness and Pentecostal Christianity) confined miraculous gifts to the apostolic age. Enter the “new evangelicals,” especially after an infusion of Pentecostalism through the charismatic movement. This brand of experientialist evangelicalism proved a perfect match for a postmodern American very open to both belief and doubt: “belief becomes … an assertion that one has chosen to see an ambiguous world in a certain way.” Evangelicals cannot prove the reality of their experiences to their skeptics, but regular experiences of God are a powerful antidote to the skepticism endemic to contemporary western society. Luhrmann isn’t a historian (see this very incisive review in Books & Culture), and she does not carefully examine the extent to which evangelical spirituality today resembles or diverges from what evangelicals experienced in earlier periods of American history. Still, it does stand to reason that Americans hungry for an authentic, personal, intimate experience of God are more likely to find it in some churches than others.

This book is important. I can think of many practical applications. If you have tried to be a “prayer warrior” and live with frustration because you never have any sense of God responding to you, it may be because you have a low capacity for absorption (rather than because you aren’t praying fervently enough!). If you have never sought to cultivate a relationship with God through imaginary prayer but are open to the concept of the supernatural, following something like the spiritual exercises of Ignatius might radically change your life. If you are a pastor of a congregation, leading your congregants through some sort of kataphatic prayer discipline might radically change your church. If you are an unbeliever, recognizing that evangelicals see the world differently because of their spiritual practices and that those practices tend to produce peace, contentment, and productivity might cause you to approach evangelicalism (and certain other forms of religious experience) with more toleration and appreciation.

December 5, 2012
The Best Books in American Religious History That I Read This Year
Next Post

December 7, 2012 FIRST AND SECOND COMINGS
Recent Comments
1 Comment | Leave a Comment
Browse Our Archives
get the latest from
Anxious Bench
Sign up for our newsletter
POPULAR AT PATHEOS Evangelical
1

The Problem with (Medieval) Women's Words: A Review...
During this pandemic semester, I had the privilege of teaching a...
view all Evangelical blogs
What Are Your Thoughts?leave a comment
Copyright 2008-2020, Patheos. All rights reserved.