People love biographies, and I am regularly asked to recommend good ones during the lead-up to Christmas. One of the most frustrating things about the bookselling business is that there is no necessary correlation between the prominent placement of books at the bookstore, or the review of them in newspapers and magazines, and the enduring quality of those books. True, bestselling books are often very well written (lively prose is the specialty of the trade press), but from a historical perspective, they often lack substance or new research.

Nowhere is the problem more acute than in biographies of America’s Founders.  Don’t get me wrong: there are popular biographies of the Founders, including ones written by non-academic historians, that are terrific. For example, I admire Ron Chernow’s books, especially his George Washington biography, for which Chernow mastered Washington’s own writings, as well as the historical literature on him, and then brought that knowledge to a popular audience. [My review of Chernow is here.]

But some popular writers simply become biography factories, churning out a new one on some well-known figure every year (or more), just in time for Christmas, often repackaging old myths and inaccuracies. Those sorts of books are readily available at Barnes and Noble and your airport’s bookstore, too.

So, as a public service announcement, here are five biographies I heartily recommend for your Christmas list. I have limited myself to religious biographies (ones of particular interest to Anxious Bench readers) written by scholars, but ones which speak to a more general audience. I am focusing here on books that will not be at the “front of the store” (or perhaps not in the store at all) this Christmas, either because they are not new, or because they were not published by a major trade press.

I am also not including some rather obvious (or self-promoting) choices like my doctoral advisor George Marsden’s brilliant Jonathan Edwards biography, my Anxious Bench colleague John Turner’s wonderful Brigham Young: Pioneer Prophet, or your humble correspondent’s Patrick Henry: First Among Patriots.

-Richard Carwardine, Lincoln: A Life of Purpose and Power. This book by Oxford professor Carwardine demonstrates the political significance of Lincoln’s relationships with evangelical Christians, and is one of the best treatments of  Lincoln’s deepening religious convictions during the Civil War.

-Catherine Brekus, Sarah Osborn’s World: The Rise of Evangelical Christianity in Early America. A brand-new biography of Osborn, perhaps the most influential woman in America’s First Great Awakening. In my jacket endorsement of the book, I said “This will become the best biography we have on a female evangelical in colonial America, following naturally from Brekus’s earlier book on women preachers in early America. But I would also recommend this as simply one of the best books I have read on the life of an American evangelical, female or male.”

-Alan Jacobs, The Narnian: The Life and Imagination of C.S. Lewis. This excellent biography combines Lewis’s life story with an examination of the intellectual sensibilities that ultimately produced the tales of Narnia. Those who have read many of Lewis’s books will especially appreciate this engaging treatment by my soon-to-be Baylor colleague.

-Paul Gutjahr, Charles Hodge: Guardian of American Orthodoxy. The definitive biography of one of the nineteenth century’s great theologians. As I noted in my earlier Patheos review, “although [Hodge] did not match the sheer brilliance of his predecessor Jonathan Edwards (what successor has?), Hodge’s greatest contributions were cogently representing the faith in his fifty-six years of teaching, his training of more than three thousand seminary students (no professor of any kind taught more graduate students in the nineteenth century), and writing theological books read by millions.”

-Barry Hankins, Francis Schaeffer and the Shaping of Evangelical America. In 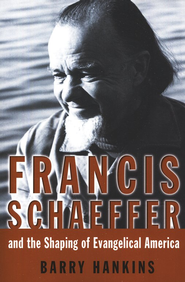 his typically lucid and even-handed style, my Baylor colleague Hankins assesses Schaeffer, the popular but controversial apologist who will go down as one of the twentieth century’s most influential evangelicals.

So purchase, read, and enjoy! In doing so, you’ll be making an investment in good books, even if they might not appear on the front display of your Barnes and Noble.

December 5, 2012 The Best Books in American Religious History That I Read This Year
Recent Comments
8 Comments | Leave a Comment
"Informative and interesting. Thank you. This raises questions about the term Protestant Reformation."
the old scribe How the English Reformation was Named: ..."
"Thank you for the insights. As you pointed out, technology has been a two edged ..."
the old scribe Is Religion Naturally Averse to Technology?
"I suppose the question is whether or not the Holy Spirit could use technology to ..."
Nimblewill Is Religion Naturally Averse to Technology?
"What a great post, Allie! Insightful and eloquent."
Ansley Every Day People in Every Day ..."
Browse Our Archives
Related posts from Anxious Bench