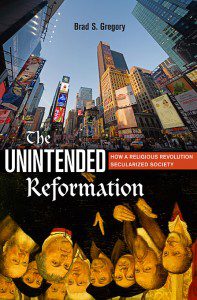 It’s not a subtle or irenic book. “Judged on their own terms,” Gregory concludes, “and with respect to the objectives of their own leading protagonists, medieval Christendom failed, the Reformation failed, confessionalized Europe failed, and Western modernity is failing.” In particular, he contends, “the Reformation is the most important distant historical source for contemporary Western hyperpluralism with respect to truth claims about meaning, morality, values, priorities, and purpose.” Protestant pluralism forced Protestant nations to bracket out religious truth claims in the public sphere in order that various sorts of Protestants (and, eventually, others) would stop fighting with each other. Thus, when one takes a long view of the subject, the Reformation bears considerable responsibility for the current state of affairs in western liberal democracies, in which public institutions demand that their citizens assent to certain fundamental individual rights without giving them any convincing reasons to believe in such things. “The modern secular discourse on human rights,” he contends, “depends on retaining in some fashion — but without acknowledging — the belief that every human being is created in the image of God.” Moreover, reason alone has been unable to reach any consensus to what Gregory term “the Life Questions,” and science necessarily sidesteps such questions.

One solution to this quandary would be for western societies to “unsecularize the academy,” to “end the longstanding modern charade in which naturalism has been assumed to be demonstrated, evident, self-evident, ideologically netural, or something arrived at on the basis of impartial inquiry.” For a moment, I thought I was reading the postscript to George Marsden’s The Soul of the American University, another book about the unintended consequences of Protestant reforms.

I have to read the rest of Gregory’s book before attempting to assess its argument. For those interested, see this thoughtful review in Books & Culture. For those who can access it through their library, the most recent number of Church History had an excellent book review forum on The Unintended Reformation.

While on the subject of thought-provoking books, I’m also partway through (yes, it would probably be wiser to comment on books after reading them in their entirety) Robert Orsi’s Between Heaven and Earth. I’m so glad that I finally picked up this slim volume. Every chapter is full of insights for more than just scholars of religion. For starters, Orsi offers this helpful redefinition of religion: “Religion is commonly thought of among modern people and by many scholars in the West … as a medium for explaining, understanding, and modeling reality, but this book offers religion as a network of relationships between heaven and earth involving humans of all ages and may different sacred figures together.” In terms of refocusing attention on practice and experience rather than belief (however significant beliefs are), Orsi’s redefinition works rather well. This is obvious for the American Catholics that he has spent much of his career writing about, but it works well for many other groups as well. Mormons necessarily come quickly to mind, but when recently rereading the 1832 memoir of evangelist Nancy Towle I was  struck by the time she spent describing visions of everything from angels to departed family members.

Toward the end of the book, Orsi includes essays on the dilemmas scholars face when studying religions, both as insiders and outsiders. Having done both, I found these stuffed with insight. Especially in light of Gregory’s call to unsecularize the academy, I enjoyed Orsi’s engagement with: 1) “evangelical Christian academics of various denominational affiliations who have felt that the hegemony of the liberal definition of religion and the dominance of liberal approaches to research have precluded their own full participation in the discipline or in the wider university culture”; and 2) postcolonialists who critique Christianity as part of a “broader political and epistemological agenda … meant to challenge the hegemony of Western ways of knowing and living.” First of all, while I did not mind the tone of Gregory’s arguments, I very much appreciated Orsi’s thoughtful, even kind engagement with both of the above groups. He was charitable. While he gives no sense in his writings of being a religious believer, I found his intellectual charity rather Christlike. Orsi, unusually, finds common ground between these two groups of critics of the modern university: “Both understand the scholar herself to be situated at a particular cultural location that fundamentally shapes her vision, and both place passion and commitment at the center of research methodology and pedagogy.”

Orsi ultimately finds both critiques wanting because they perpetuate a problem endemic to the academic study of religion — the tendency to recoil from certain expressions of religiosity because they fall short of a scriptural, political, or theological standard. Orsi, by contrast, proposes “an in-between orientation.” “This alternative,” he writes, “– which I think of as a third way, between confessional or theological scholarship, on the one hand, and radically secular scholarship on the other — is characterized by a disciplined suspension of the impulse to locate the other … securely in relation to one’s own cosmos.” Scholars open to transformative encounters with religions of all sorts need not discard their own beliefs, but they need to discard any repugnance of “the other,” because that repugnance gets in the way of understanding. That repugnance, by the way, is not just a problem for scholars conducting fieldwork. It’s a major problem for historians as well.

Many evangelicals would probably prefer Gregory’s call to “unsecularize the academy” to Orsi’s call for an “in-between orientation.” For decades, many evangelical scholars have intended to transform the university and have evidenced rather less interest in opening themselves up to transformation through encounters with other religious movements.

Orsi, however, makes a strong case that students in the “polytheistic world” of the modern university “are not well served by a professor’s witnessing to a singular truth, nor will they be inevitably awakened by denunciations of their Christianities by postcolonial critics. Nor will students be helped by normative accounts of religion that neglect or exclude all the humiliating, destructive, beautiful, mysterious, and terrifying dimensions of it that they know from their own experience.”

It is easier to diagnose the ills of the modern university (by that, I don’t mean Gregory’s genealogical examination of their antecedents — that’s not easy) and far more difficult for believing scholars and teachers to know how to respond to them. From my vantage point, Orsi’s charitable engagement with the variety of religious and secular perspectives that collide in the academy is a good place to start.

January 16, 2013
Where Are the Studies of Twentieth-Century Black Evangelicalism?
Next Post

January 18, 2013 DO LANGUAGES (AND FAITHS) VANISH WITHOUT TRACE?
Recent Comments
1 Comment | Leave a Comment
Browse Our Archives
get the latest updates from
Anxious Bench
and the Patheos
Evangelical
Channel
POPULAR AT PATHEOS Evangelical
1